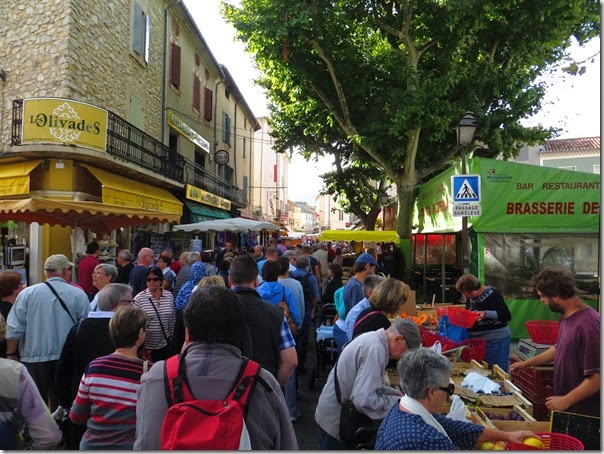 Market day today. Street after street lined with vendors, plus two plazas full of them. There were food vendors scattered around, but we couldn’t find the street that was lined with food vendors until we had walked almost every street. We joked that we should have been looking for nonfood items in which case we would have discovered the food street when we first walked up to the market area. 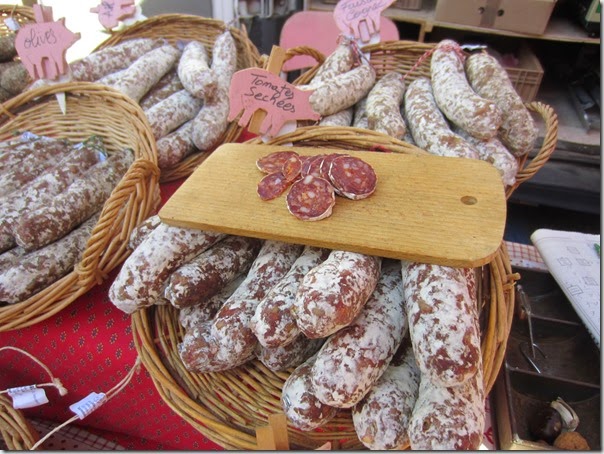 One of our purchases, saucisson. There were samples for some of the many varieties at this booth, and once Linda gave her approval, we bought one. I did have to laugh because when she picked up the thin slice she first tried to peel off the moldy rind. Once I had informed her that one eats the outside as well as the inside she chomped down on it with no hesitation. Put a piece of meat in front of one of those Viking descendants, and it is soon all gone. 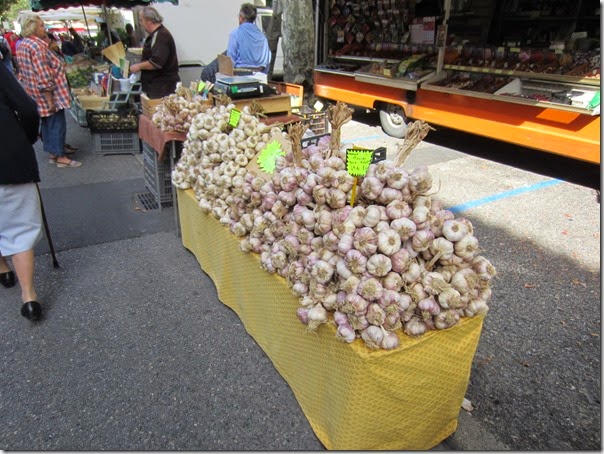 As you can see, there was no danger of vampires at the market. 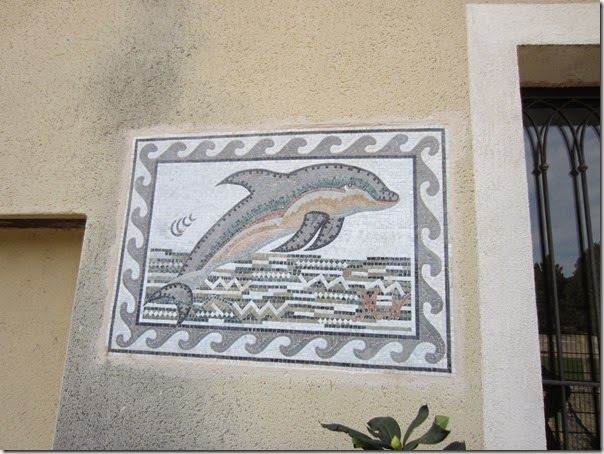 Loaded down with good things to eat, we headed back to the apartment. It is located directly in front of what is known as the “Dolphin House” of the Roman town. No problem in knowing which door is the one that leads up to our apartment, we just look for the dolphin mosaic on the wall. 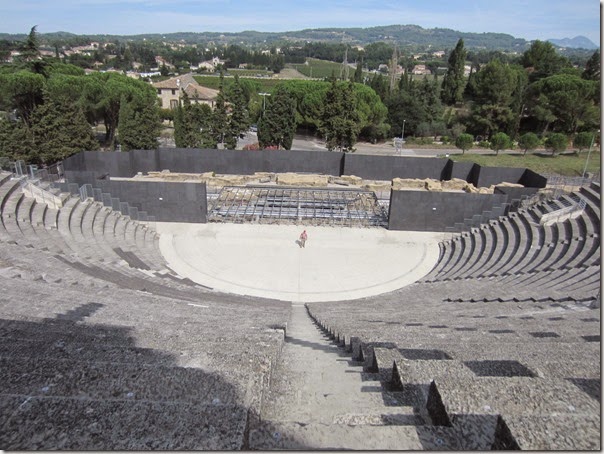 View from the top of the 6000 seat Roman theater that is still used for concerts and other performances today. The little dot in the center of the stage is yours truly. In a tremendous display of masochism, I walked from the top of the theater to the bottom once, and from the bottom to the top twice. I have to do something to stay young to keep up with the young woman I married. Linda, showing a remarkable degree of intelligence for someone from the hills of Appalachia,used the tunnels and ramps to get around the theater. Smart Linda. Tired Bob. 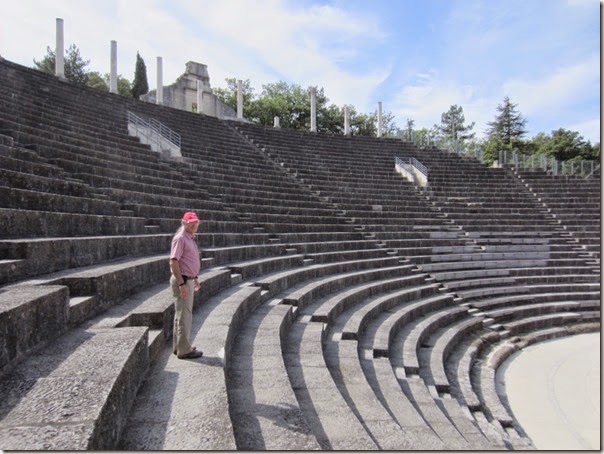 The seating is not original, having been topped with concrete, though they have have left several sections of the first couple of rows as they were originally uncovered when the theater was excavated in the 19th and 20th centuries. I call this my, You want me to go where? so you can take my photo, look. 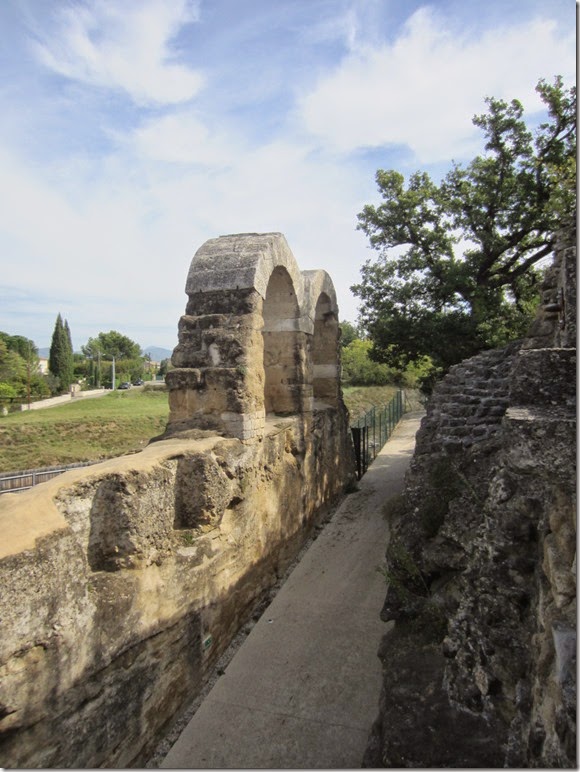 These two arches were all that showed above the soil when they first began excavating the site. It seems that much can disappear over the course of 1700 years. 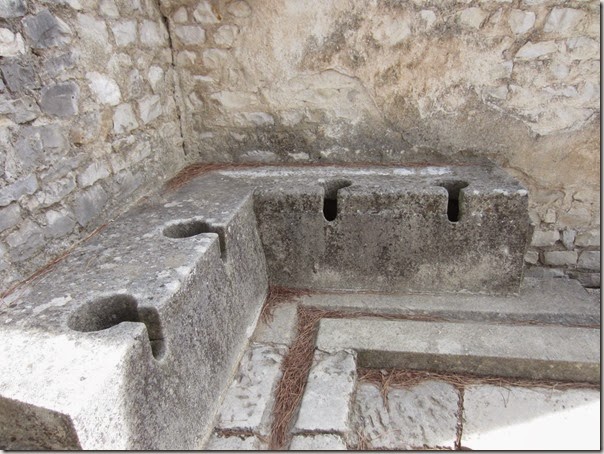 Roman latrine flushed by continuously running water. You sure can’t poo poo the degree to which the Romans built and maintained their cities. 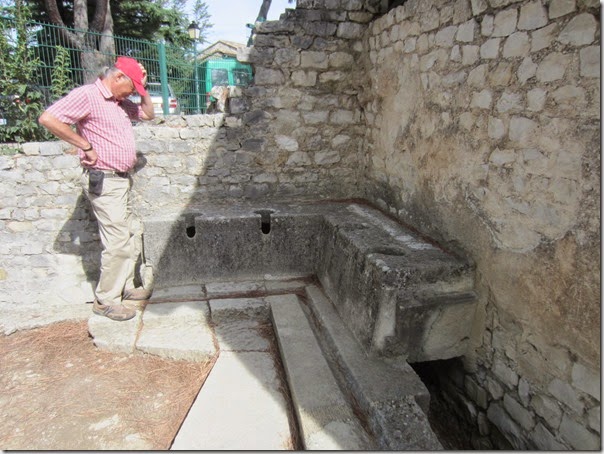 The, I wonder what the trough in front of the latrine was for, pose. 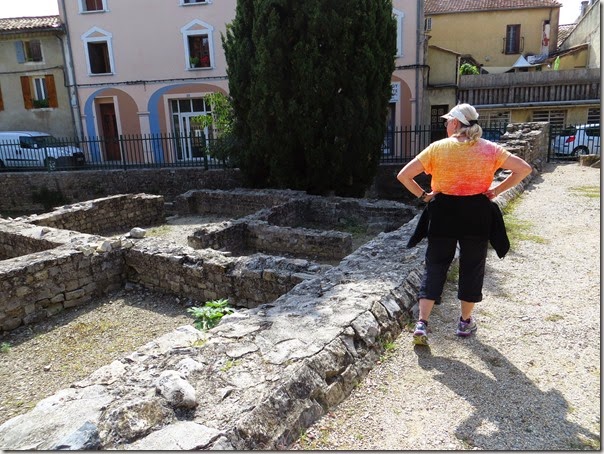 The, I wonder what that big pot over there was for, pose. 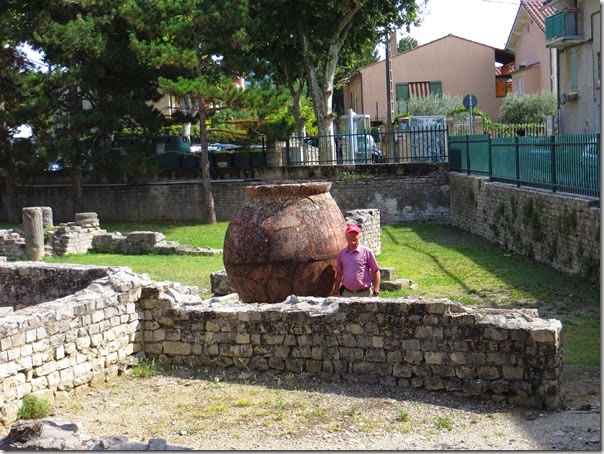 Did I say big pot? We never did figure out what it was for, but it was most definitely a BIG pot. After she took this photo I was quizzed if I was kneeling down. Nope, I was standing upright. Was the pot up on a pedestal? No, it had a stone base that was at the most two inches high. For all I know, maybe she thought I had been zapped by one of those shrinking man ray guns or something. 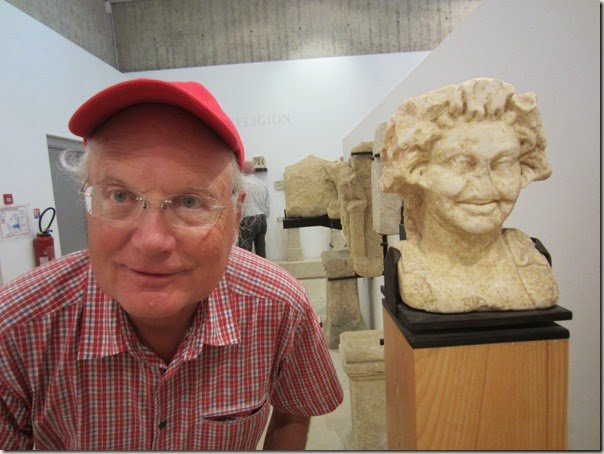 Linda said I looked just like the sculpture. I disagree, the sculpture doesn’t have a hat on its head. Blind Bob. 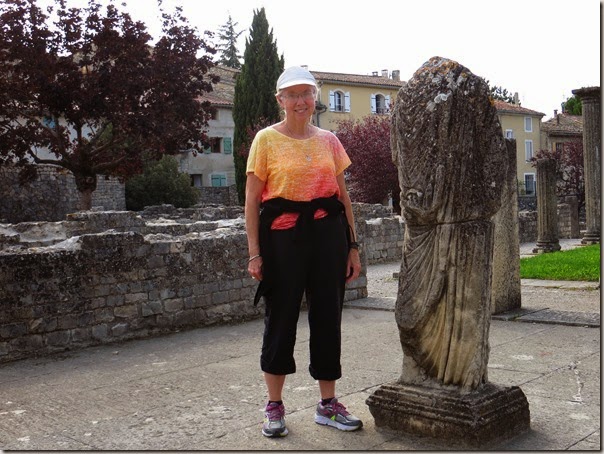 The window just to the right of Linda’s beautiful smile is the one for our bedroom. Obviously this statue became so excited at the prospect of having someone as pretty as Linda stand beside it that it lost its head. Bad Bob. 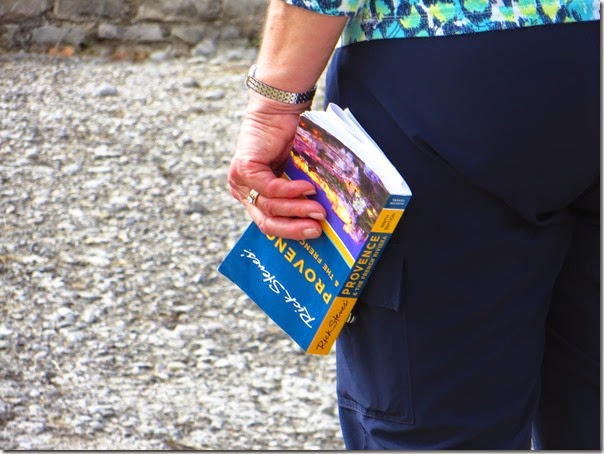 The “Blue Book horde” was out in abundance today. Not unexpected however as it is a Rick Steves town. 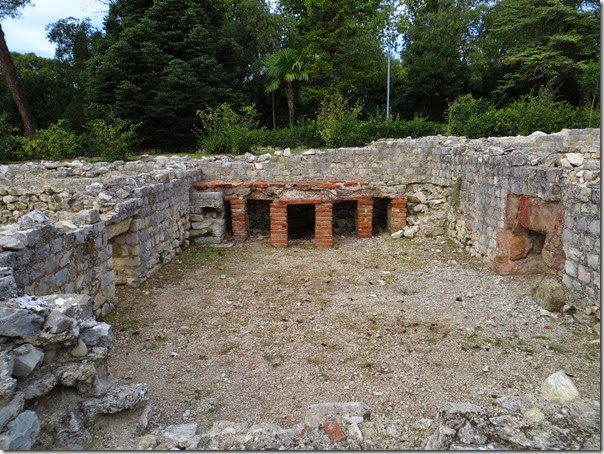 Roman central heating system. Just think how far advanced humanity would be if the Catholic Church hadn’t used its distortion of Christianity to put fear into the minds of the people and drive them into poverty while lining its own treasuries by selling entrance into its heaven. 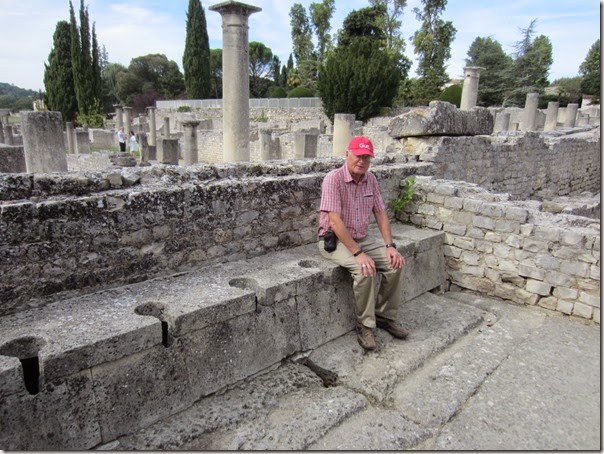 Speaking of crap, how about an answer to the earlier question about the design of the Roman toilets. Item one: you really don’t need the mammoth hole a modern toilet seat provides seeing as how the parts of your body doing the depositing are much smaller. Second: if everyone wears a toga, it is far easier to sit do both businesses, just hike up the back and privacy is no problem, plus you can talk to your neighbors and get to know them at their very worst. Third: when done with your higher number business, you don’t need no stinking toilet paper. Take the long stick with the sponge on the end that is against the back wall, dip the sponge in the water that runs through the trough in front of you to clean it, insert through the slot under the hole, wipe clean, dip once again in the water in the trough to clean it off and replace it against the wall for the next person to use. Just think how many millions of trees could be saved if public toilets used this method today inside of providing toilet paper. Of course why stop there, we could use the same method in our western civilization toilets in our houses and the number of trees saved might even be in the billions. Environmental Activist Bob. 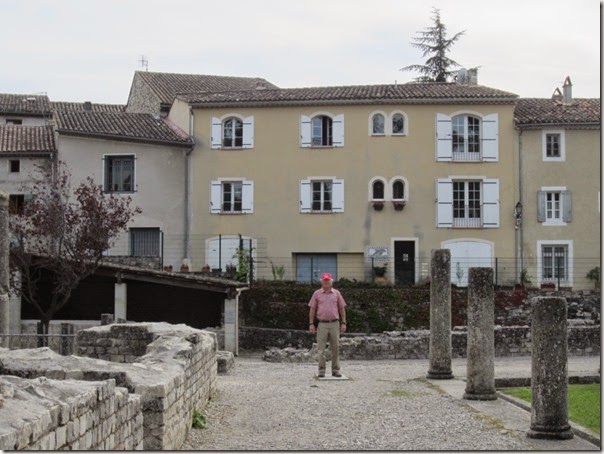 When Linda told me to go down there and stand on that square so she could take my picture I wasn’t sure what to think. For all I knew that little square was a trap door that would drop me straight down into the Roman sewer system. It turned out all she wanted was to take my picture standing in front of our apartment. Still, now that I know she has Viking blood in her it pays to be very careful on my part. 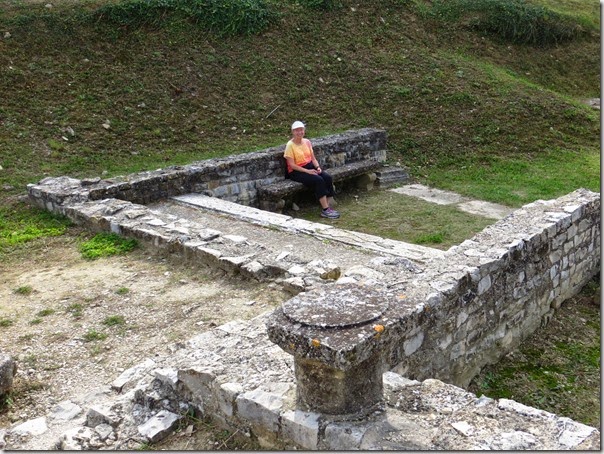 If you close your eyes you can almost see a little old Roman lady sitting on the bench in this photo. 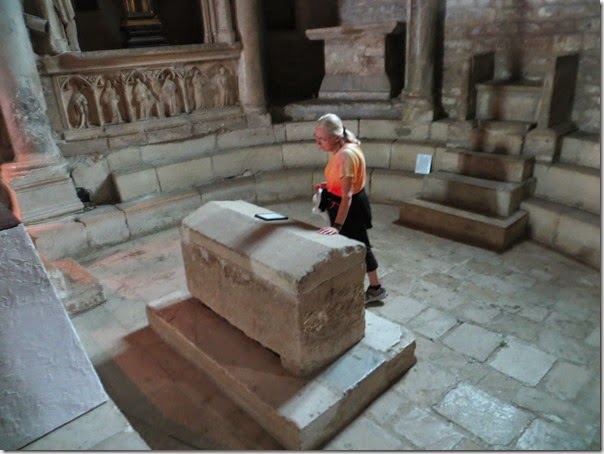 Any more comments like I made for that last photo and it would likely be me instead of some dead guy in this sarcophagus. There were no cracks to look through, so maybe she has her hand on it feel for a heartbeat? Wander into a church, go up behind the alter and down in an alcove and you never know what you are going to find. Bob and Linda, having more fun in Life than two people should be allowed.
Posted by Bob and Linda at 2:10 PM