Can You Say Sara N. Dippity 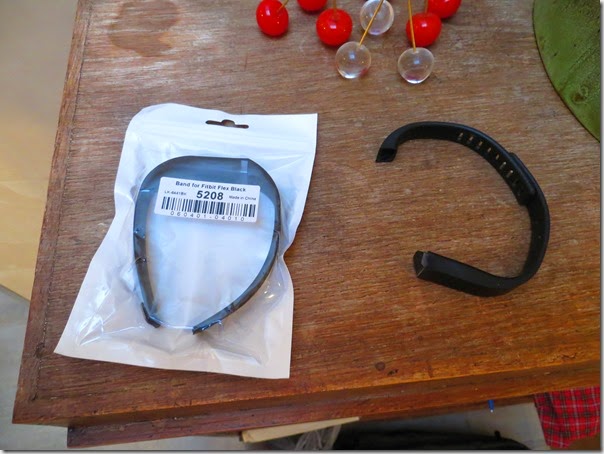 Not a good start to the day. My Fitbit strap is supposed to open at the clasp, not here. Luckily Linda was prepared and I had a spare. For something that is so heavily promoted they sure don’t have a good design for the strap. This is the second one I have broken since Christmas. If you don’t have one I’d advise you think long and hard, while reading the reviews, before buying one. Not sure I would buy one myself  if I didn’t already have one, given my experience with mine to date. 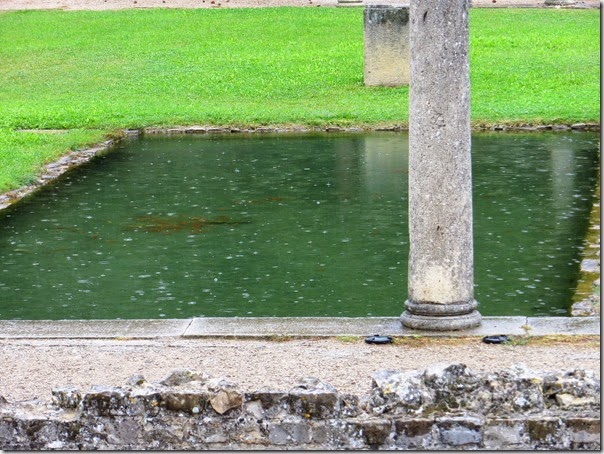 The pool in the Roman ruins in front of our apartment tells the weather tale for the day, rain. Rain all day. Not a major downpour, just a steady unrelenting drizzle. 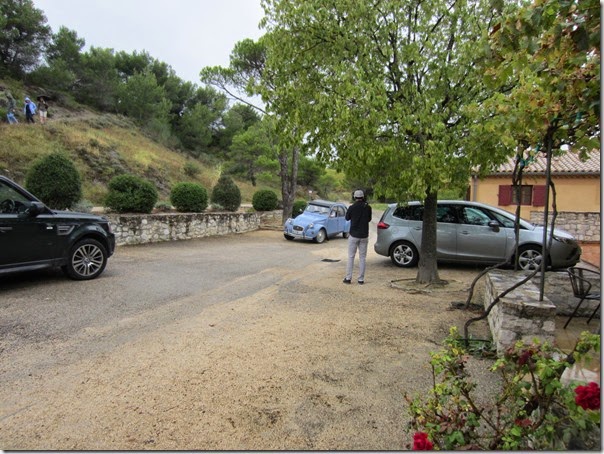 Just like the postman, a little rain didn’t stop us from our appointed rounds. That being, going high up into the hills to a small winery for what else, to taste their wines. When we arrived two things were going on, they were just about to start a tour of the winery and a TV crew was filming scenes for an episode for an up coming Travel Channel series. John said it best, “It’s Sara N. Dippity.” 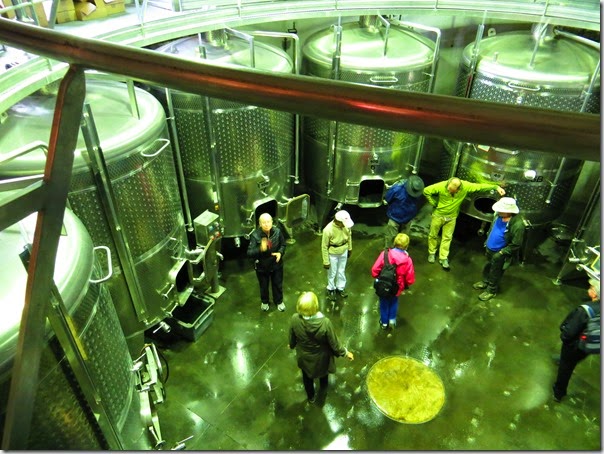 What the wine gods see when they look down on a winery tour. 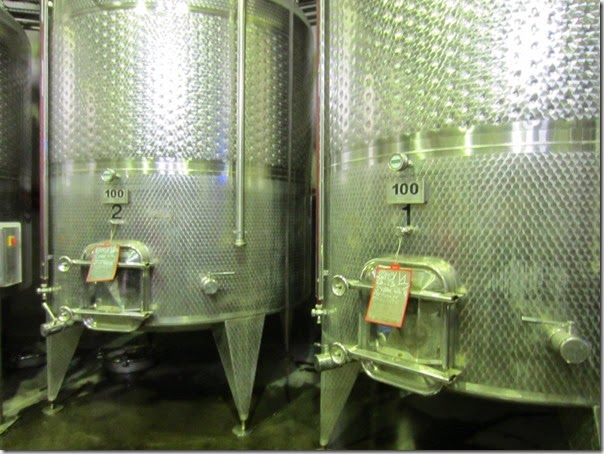 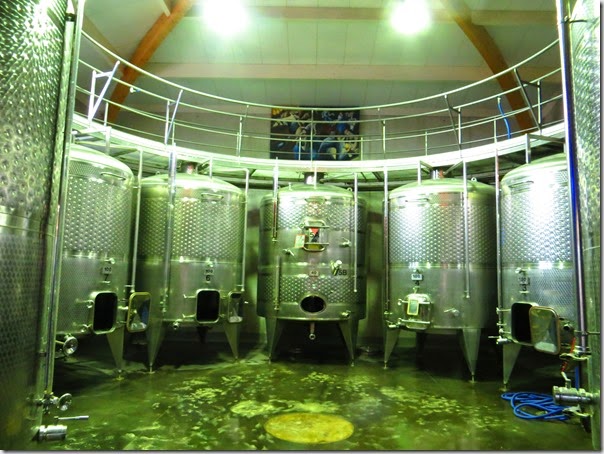 Lots of stainless steel tanks, tanks like you would find in US wineries. 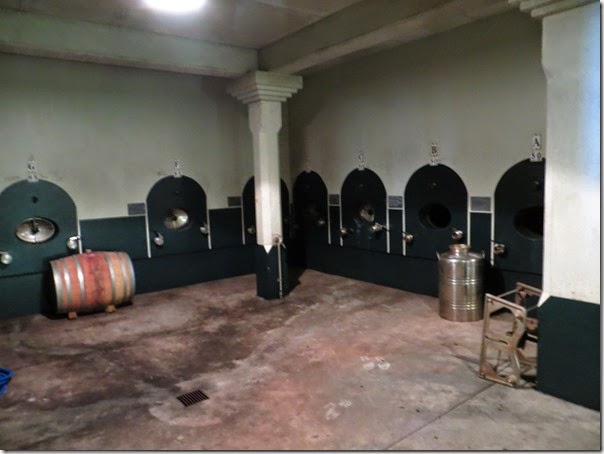 Concrete tanks. Tanks like you won’t find in US wineries but can be found in wineries in France. Could you imagine the horror of a US producer using concrete tanks. Goodness sakes, they might even be ridiculed. In France their business is producing the best wine they can. In the US it is more about image. 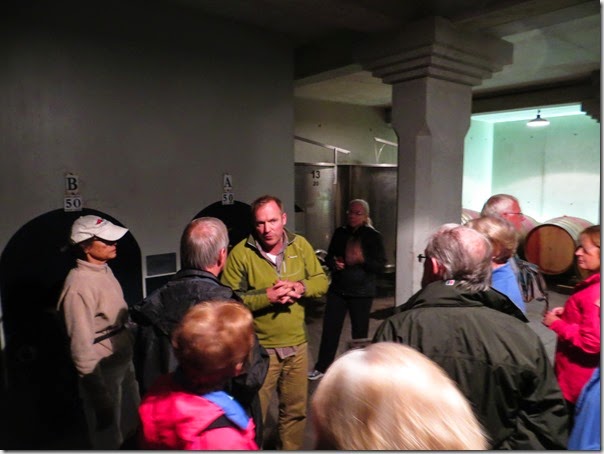 It was a great wine tour, packed with information as to why and how they make their wines the way they do. The best part was that it was all in English, and perfectly understandable English, though with an Australian accent. Note the woman in black in the background intently listening to this explanation of why they use concrete tanks and furiously taking notes. Could it be that there will soon be a budding wine industry blossoming in the Rio Grande Valley? Of course it would be white wines only, but stranger things have happened. 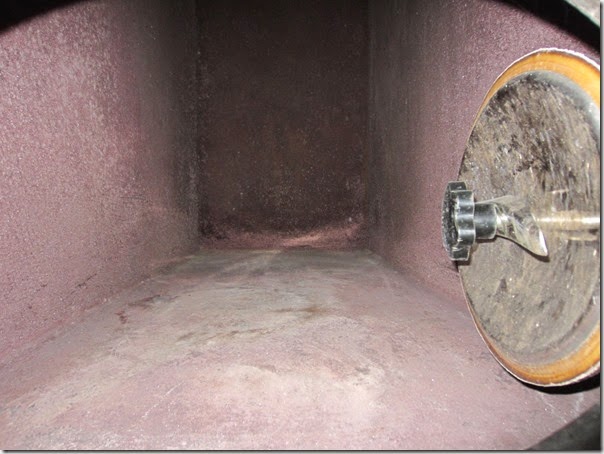 Linda even stuck her head into one of the concrete tanks and took a picture. My guess is she will have to look long and hard to find the same red tinted concrete they have in this tank. Maybe she could use it to produce her rose, or maybe I should just quit writing while am ahead. Or have a head for that matter. 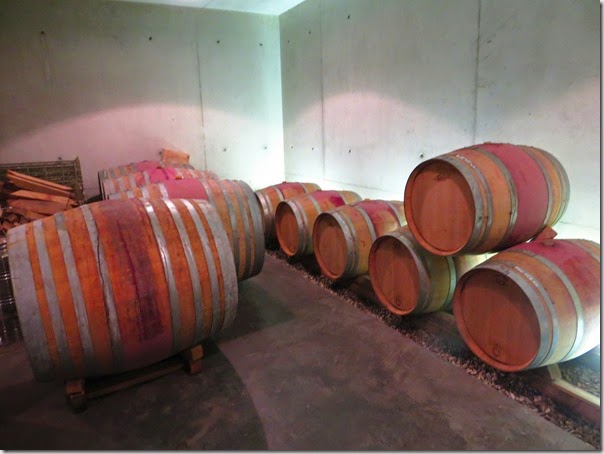 As we heard the winemaker explaining how they select the grain of the oak in the barrels, either open grain or tight grain, depending on how the grapes taste that they are using to make the wine, I was having troubling trouble visualizing Linda doing anything with the barrel staves other than using one on my head if I keep up this line of writing. That’s not quitting while I am ahead, it’s quitting while I still have a head. 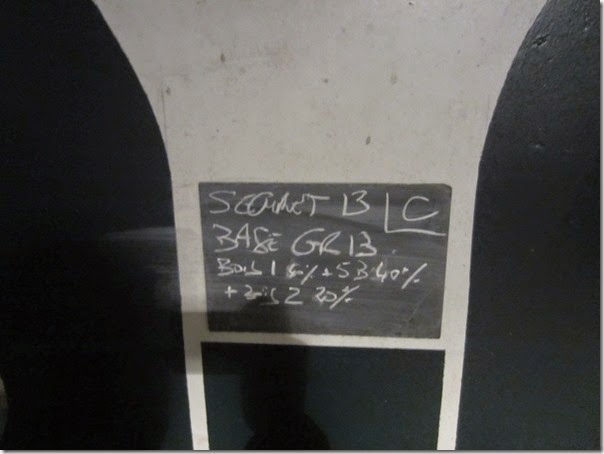 Winemaker secret code in front of one of the tanks. The shadow in this photo looks suspiciously like someone I know, but I’ll not divulge who. It was interesting that as we left the winery Linda said something about all she wanted for christmas was a secret writing winemaker decoder device. 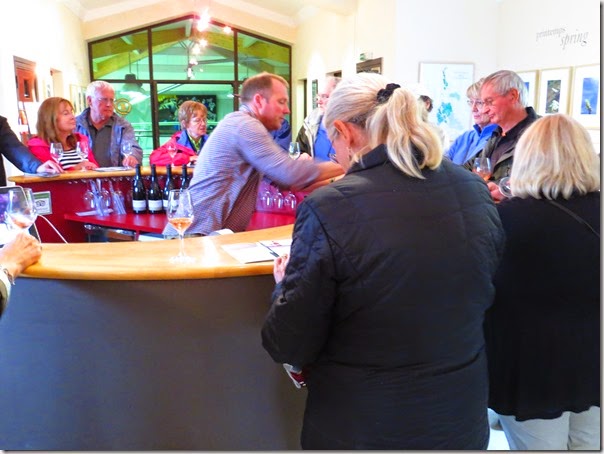 Linda taking copious notes during the wine tasting. The winemaker must have known he had a wannabe winemakerette in his prescience since he started with the one wine she liked. Of course it was white, but who bothers with those little details. We’re talking a major challenge to the Gallo empire here by Linda’s Luscious Lovely Floating Clouds White Wine empire. Dreamer Bob? 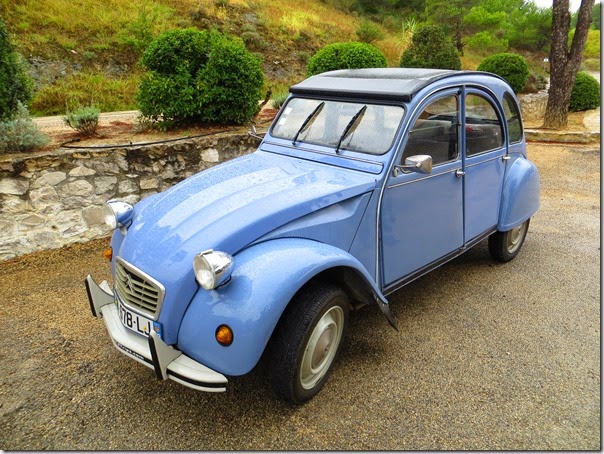 This car was used in filming the TV episode. We thought it looked cute. A member of the film crew said it leaked like a sieve in the rain. We were both right. 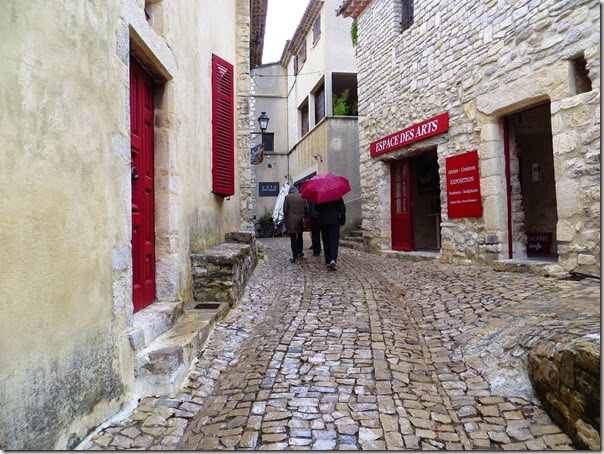 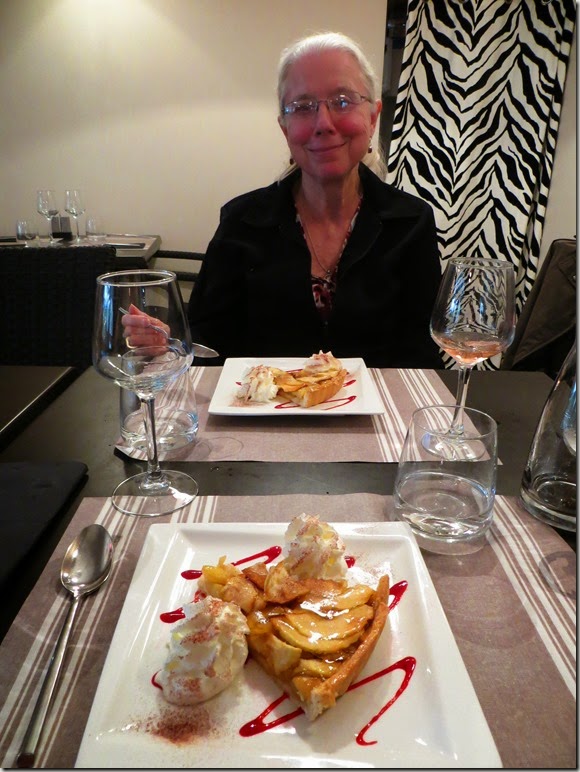 Skipping all the preliminaries, we had a totally awesome meal, everyone ordering something different and everyone raving about how good their food tasted.  Dessert was a different story. 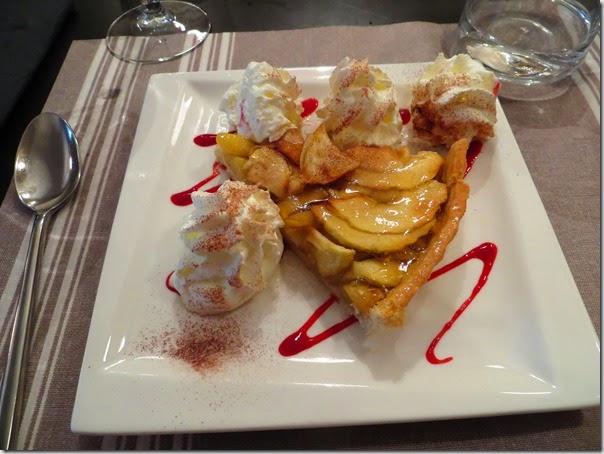 Notice a difference in this photo of my dessert from the one above? Four piles of whipped cream here. Linda has some crazy idea that eating whipped cream causes her to have what is best described as unpleasantness. I am glad to help her out so she is more pleasant by being whipped Bob. 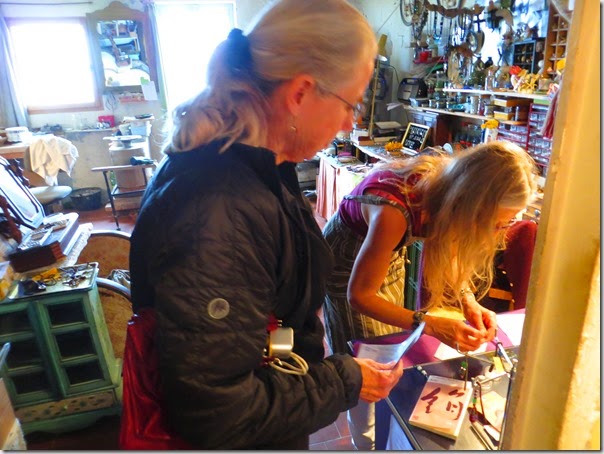 I need to be careful what I divulge about this photo, but in a tiny room in what was likely a 16th century building, we stumbled upon an artesian from whom Linda made a number of purchases for an event later this year. Sure beats giving a Walmart gift card. 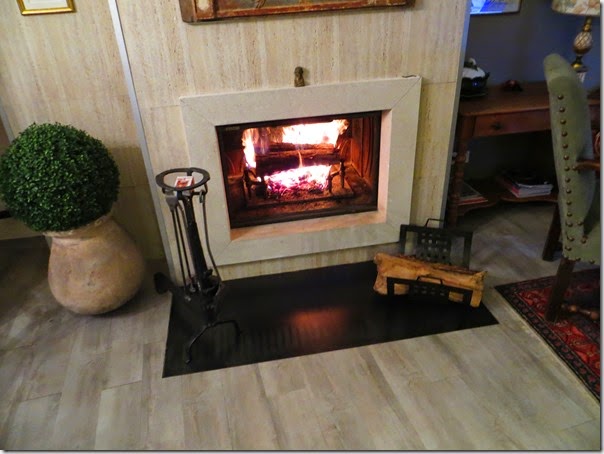 The perfect way to warm up on a cold, rainy evening. Not shown was the new cheese for the night, Banon cheese. It was a goat milk cheese that comes wrapped in chestnut leaves. Linda has been blown away by how good the goat cheeses taste in France. On the other hand she nearly gags when she gets near the case with the goat cheese in the US. I guess the goat cheese in the States in made for American tastes. Crappy cheese for crappy tastes.

Tomorrow we leave southeastern France for northeastern France and our two week stay in Brittany. We couldn’t have asked for a better day to end our time here as not even the rainy weather could dampen what turned out be a totally awesome day. We travel and know, You travel and know. Those who don’t travel will never know.