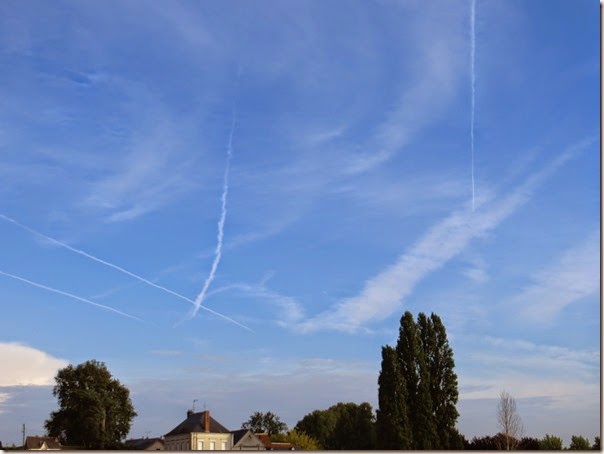 Yesterday morning it was double rainbows, this morning it was multiple contrails. I wonder how many people live with their heads down and never look up to see the beauty above. 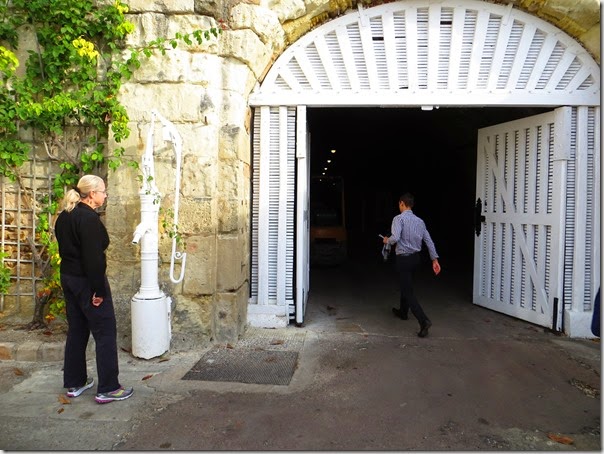 A wine tour this morning took us back into a Loire Valley hillside cave. As you can see, Linda wasn’t dragging her feet to get going on the tour. 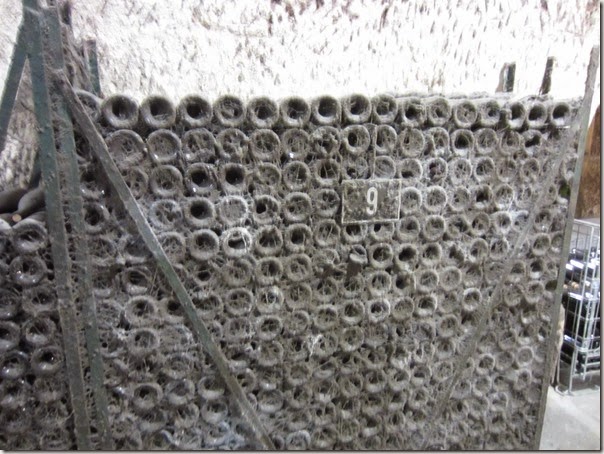 Just one of the nineteen photos Linda took of wine bottles covered with spider webs and cave dust. 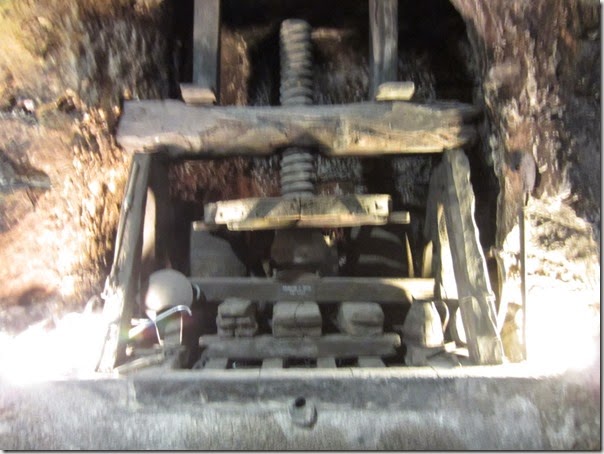 In a side niche of the cave was this 16th century wine press. 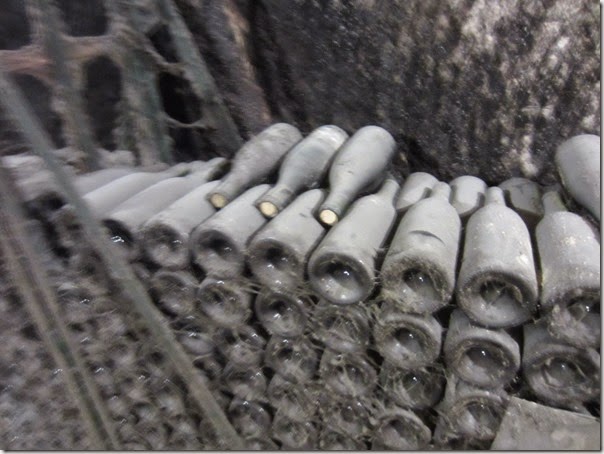 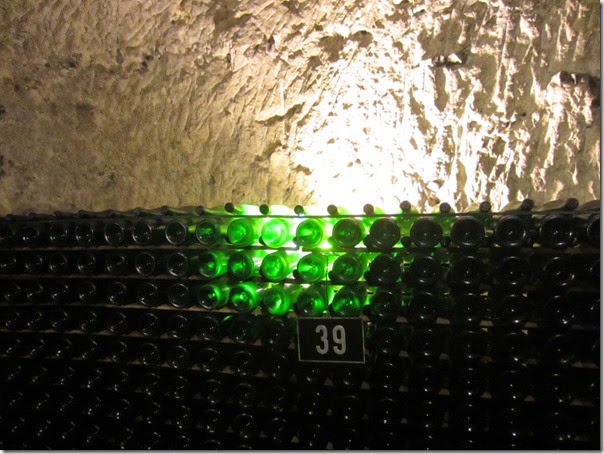 Something tells me it was the light shining through the bottles that caught her eye here. 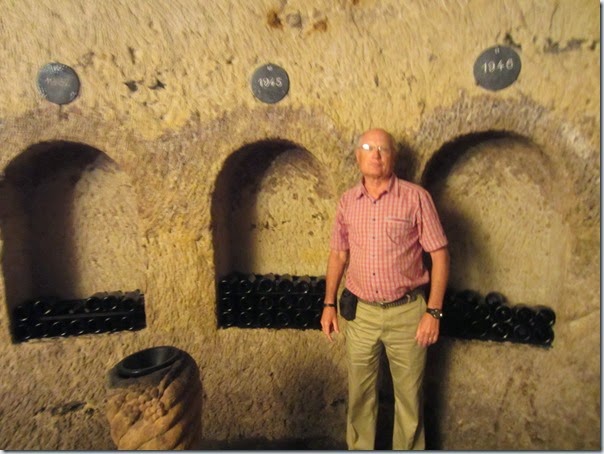 This one didn’t count in the nineteen photo total because I was sure she took it to show this handsome, smiling, good looking young fellow and not those old wine bottles. Dreaming Bob. 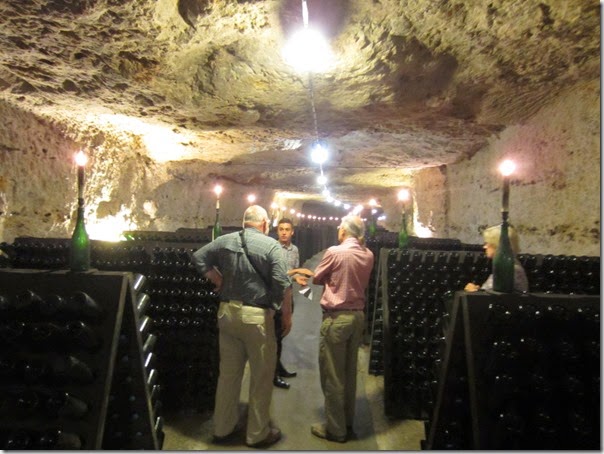 Racks and racks of sparking wine, all of which are hand turned. There are roughly half a million bottles of sparking wine in the cave at any one time and the person who is their bottle turner can turn 10,000 bottles an hour! 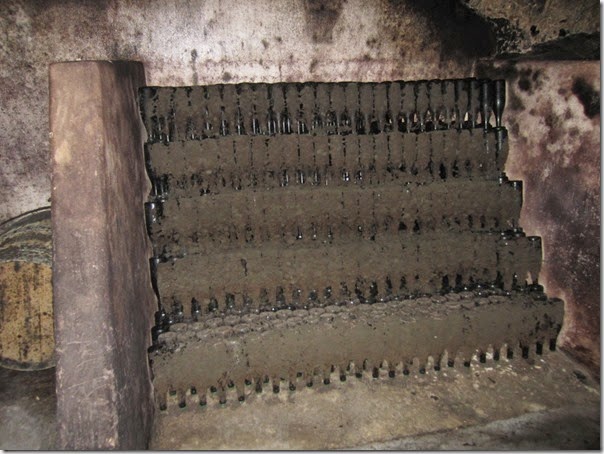 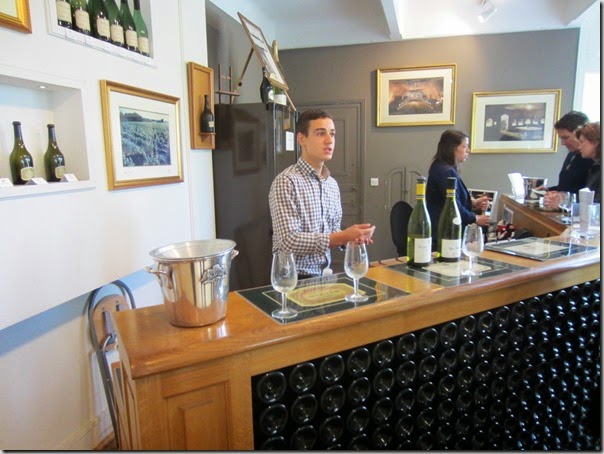 After the cave tour we enjoyed tasting their wines, though neither of us enjoyed the taste of their wines. It would seem that our palates and Loire Valley wines are just not compatible and that extends to the wines we have had in the restaurants in the area. But in another week we will be back up on the north coast of France so there is hope in our future. Next it was off towards cheese country which because of less than precise maps, made for a rather interesting adventure. We finally did find the tourist office in the town we were looking for, but just as we pulled up they closed for the lunch hour, that hour being an hour and a half. After a frustrating attempt at a cheese farm, the farmer speaking only French and our only French speaker understanding only a few of the words he said, we ended up back in town at the local market only to find that all the stalls were closing. Can you say, it just wasn’t our day. But at least we weren’t driving and neither of us speaks any French. 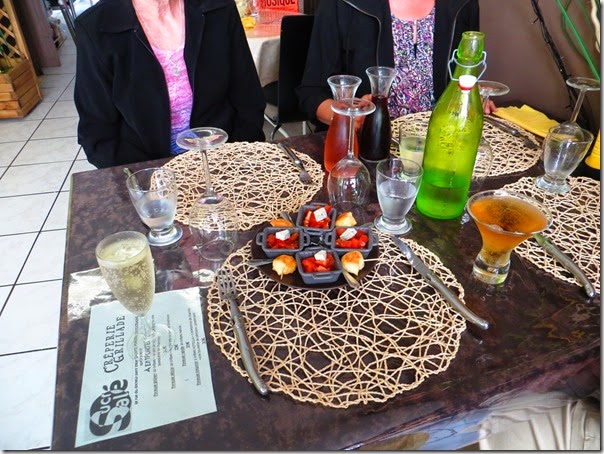 Lunch however turned out to be awesome as I found a little creperie on a side street away from the town square. 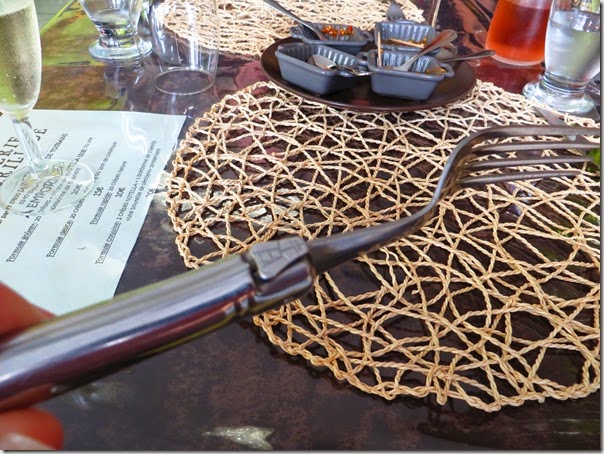 Note the flattened area on the side of the fork. It is where your thumb goes if you hold the fork in your left hand as the Europeans do. And as I now do as I have learned it is actually easier to eat that way. Euro Bob. 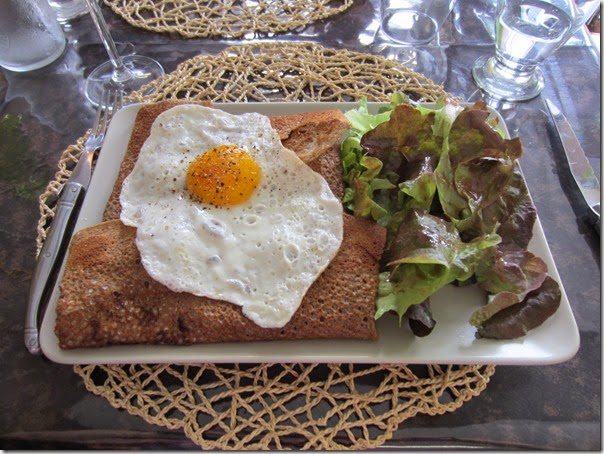 Linda’s galette with egg upside down. You see, she wanted the egg yolk to be down to eat it, however when she flipped it over the yolk ended up on her salad. Looking at it I inquired if she was going to eat her salad. Her answer was to take a big bite of it. Yuk!! 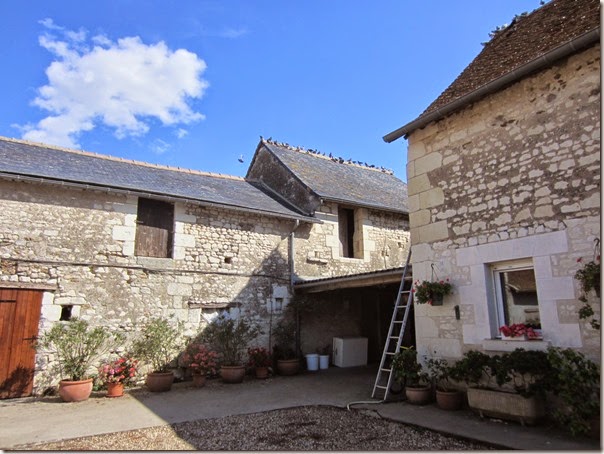 A visit to a real French cheese farm. A cheese farm that smelled of goats. A cheese farm where they not only raise the goats and milk them but make the milk into cheese. A cheese farm, just like the others we stopped at, where no English was spoken. I know they were talking but I don’t have a clue what they were saying. 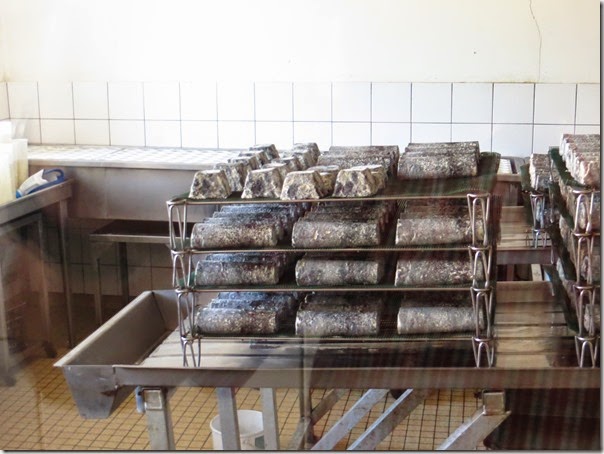 While it looked like they specialized in the Saint Maure(?) cheese, there was also a few pieces of several other types. I had thought we were going to these places to taste cheese, but that wasn’t the case. Don’t ask me why, as all the talking was in French. In hindsight, doing these things would be a lot more fun if one understands some French. 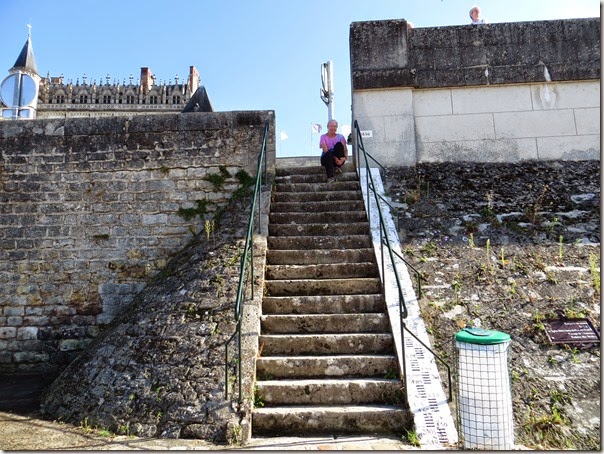 River towns in Europe like to mark the high water level that occurs in the years of big floods. The white sign next to Linda’s shoulder marks the highest level we found in Amboise. Contrast that to the marks near second story windows in some of the towns in Germany, towns that have levees as high as this one. 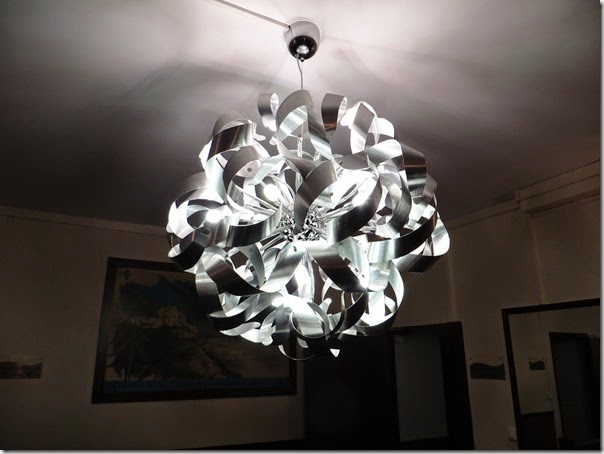 I like lights. I’ve always liked lights. This polished aluminum and LED light creation hangs at the top of the stairs to our floor in the hotel where we are staying. I really like it. Illuminating Bob. 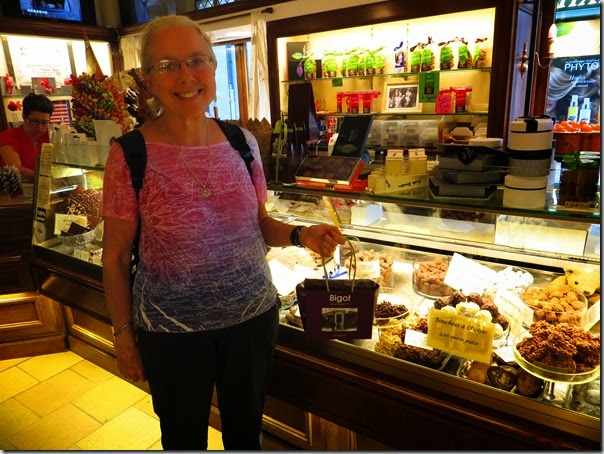 We were walking around town trying to decide where to eat dinner, when the beautiful brainy babe I am married to said, “If we can’t decide, we could eat dessert first.” That is how we ended up at the Bigot chocolate and pastry shop getting a take away chocolate meal. Sometimes you just have to do what you have to do. And we never did eat anything else. 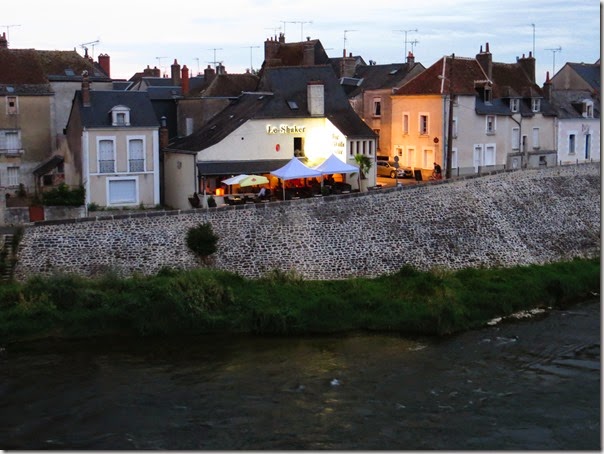 As dusk descended we walked across the bridge to the island in the middle of the Loire River, our destination, a famous bar at the edge of the river bank. 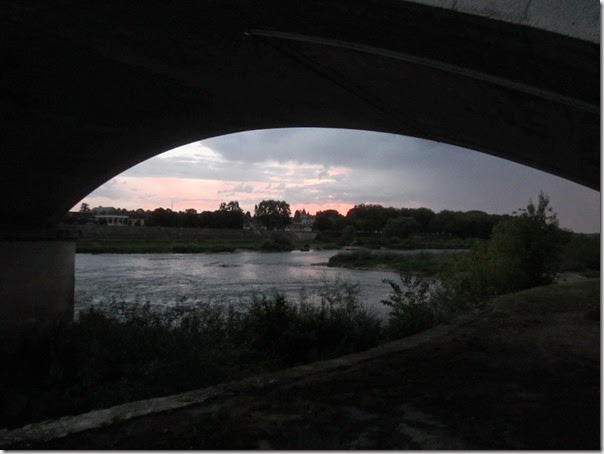 One of those interesting photos that show up on Linda’s camera. She took this one when we were down under the bridge. 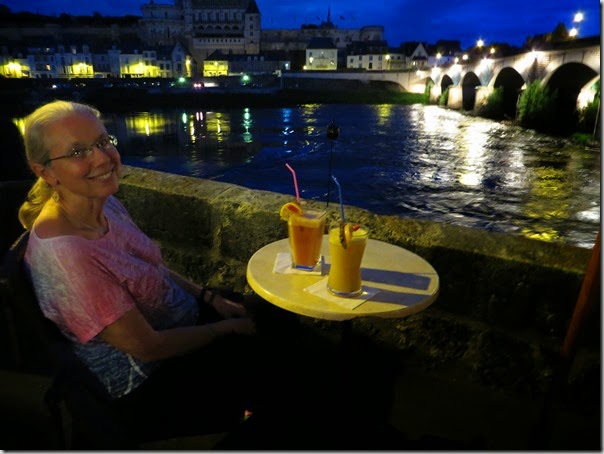 The absolute perfect end to the day. It just doesn’t get any better than this, and we spent a hour and a half enjoying the view, the sound of the river and each other.

And so we end this post with our motto: Don’t be afraid to love, laugh and retire early.