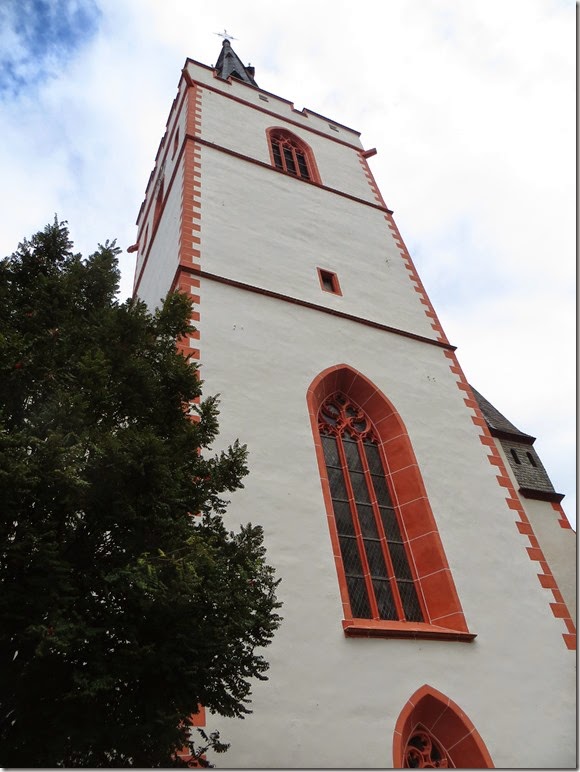 Since it was Sunday morning I thought it would be fitting to begin this post with a photo of the church that is very near our hotel. The same church whose bells started peeling at an early hour and seemed to have their stop key broken. It’s why we always talked through the organ prelude at the church I grew up attending, as it seemed to go on and on forever. I am sure the current organist at that church has her own way of making everyone sit quietly while she plays the prelude. 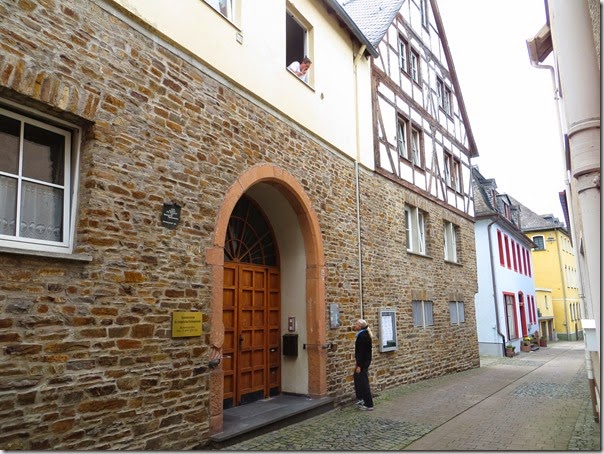 The sign the beautiful young woman in the photo is reading said this was the oldest building in St. Goar, the stone part having been built in 1137. And in the US we think buildings dating from the early 1900’s are old. I seems the motto in the US is build it cheap, build it quick, and let the next owner keep it from falling down. We may be the throw away society in more ways than one. 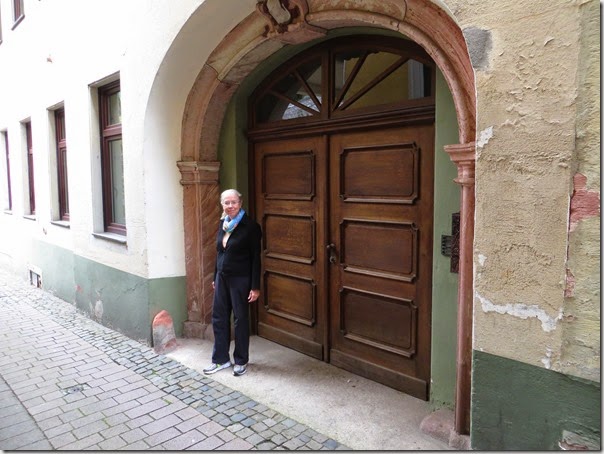 What can I say, when I find a gorgeous looking model who can make any old thing look good in comparison, I use her in my photos. Take the stone carriage wheel bumper in this photo for example. Most people would pass it by without a glance, but place a beautiful young woman nearby and the eye is naturally drawn to it. 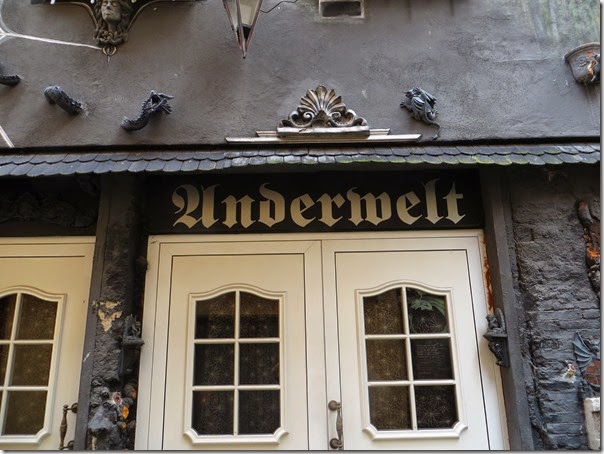 The sign above the door of this building says Unterwelt, i.e., underworld. Meaning the place of the dead where torture and torment are the order of the day. Below without comment are some photos of various areas outside the building. 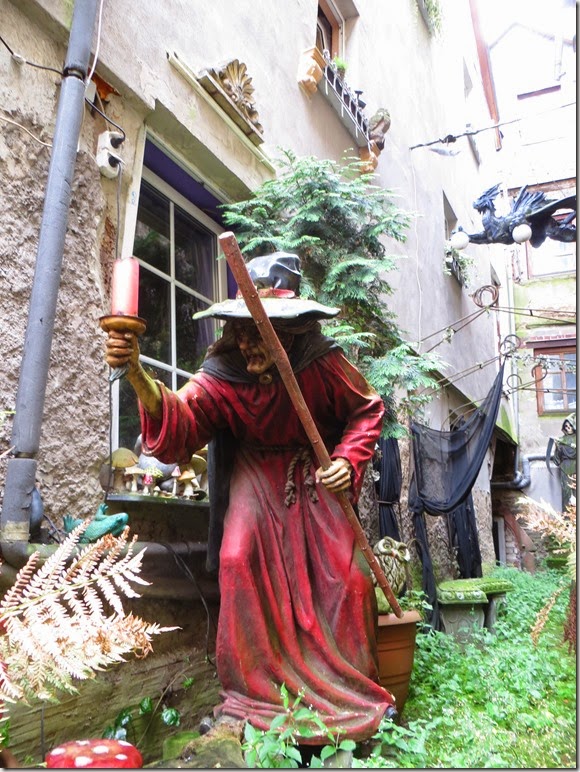 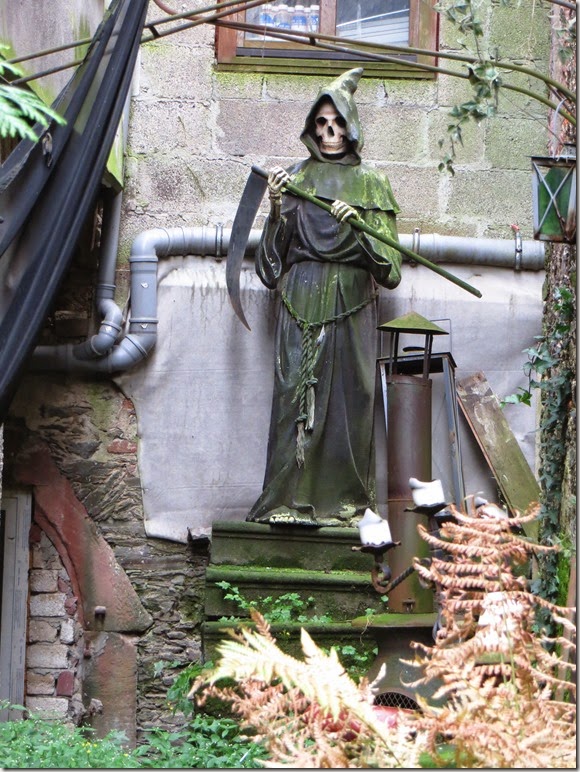 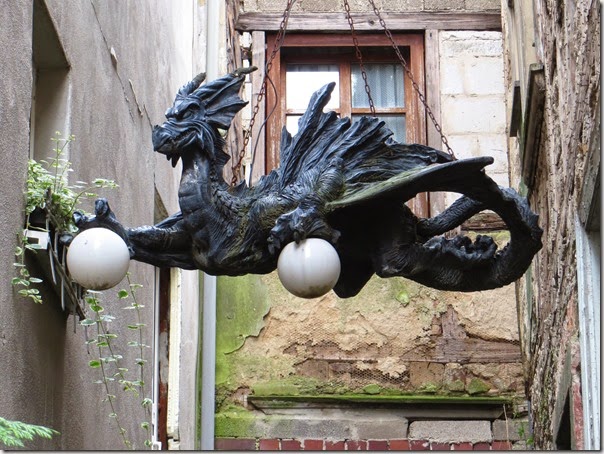 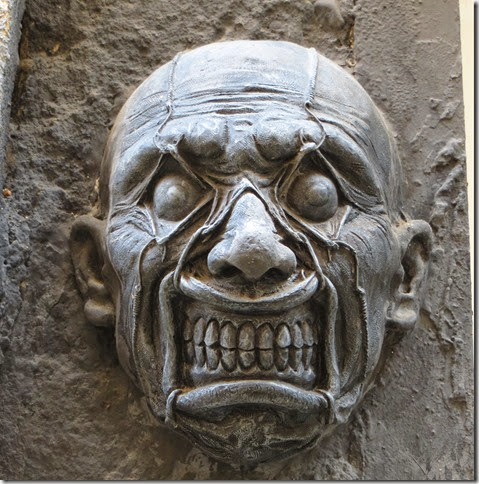 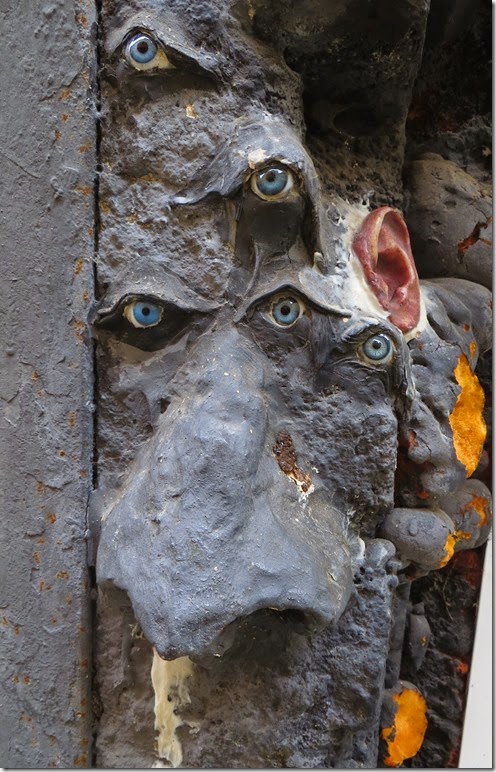 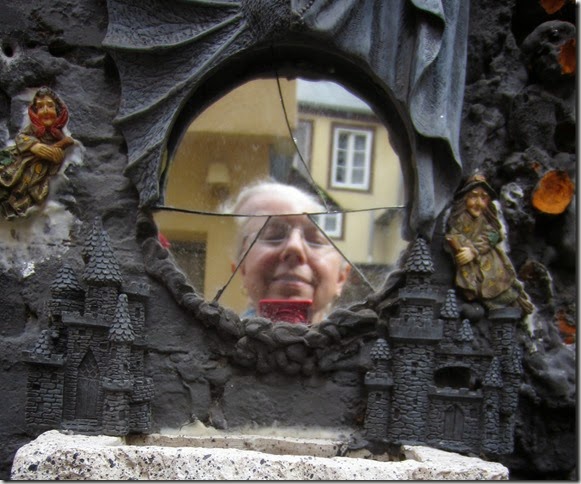 I don’t know about you, but I found this last one to be the scariest of all. It is known as the closed eyed, offset head Appalachian Hill Monster, aka, vicious lindus. 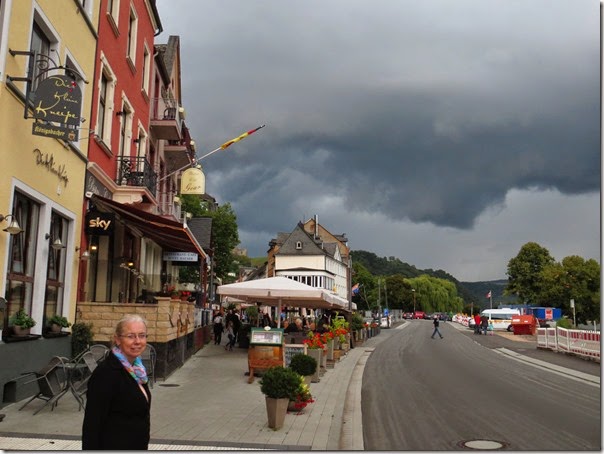 We had a major thunderstorm come through town this afternoon which had all the shopkeepers madly rushing to get everything inside before it hit. 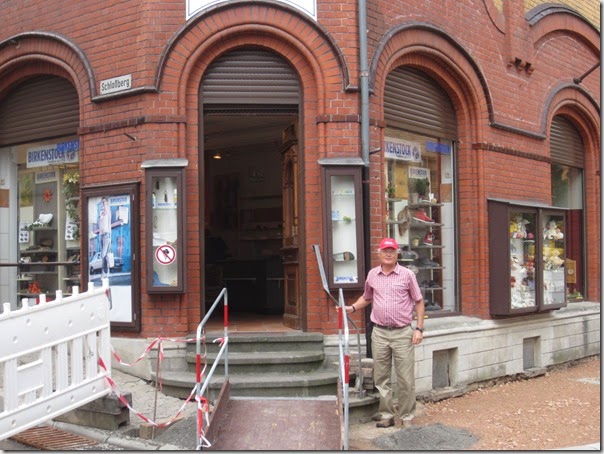 But it really wasn’t much of a storm at all. 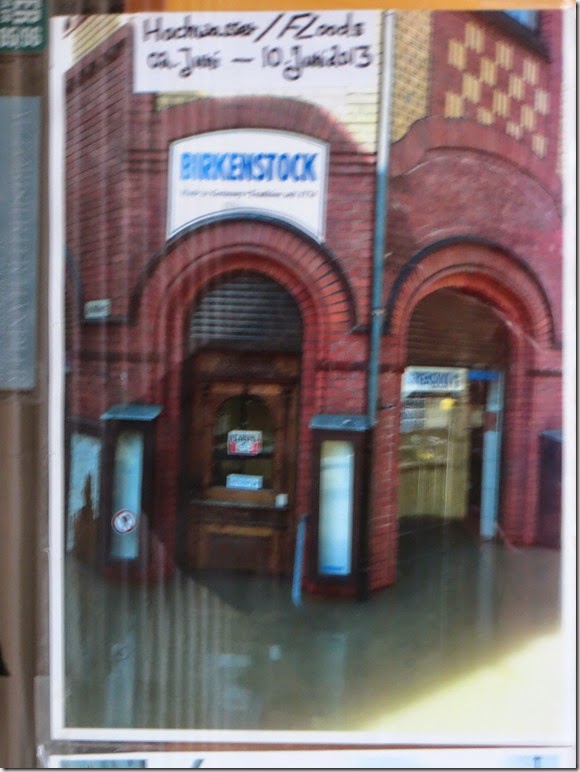 The same spot last July from a photo on a nearby building. The water would have been chest high. 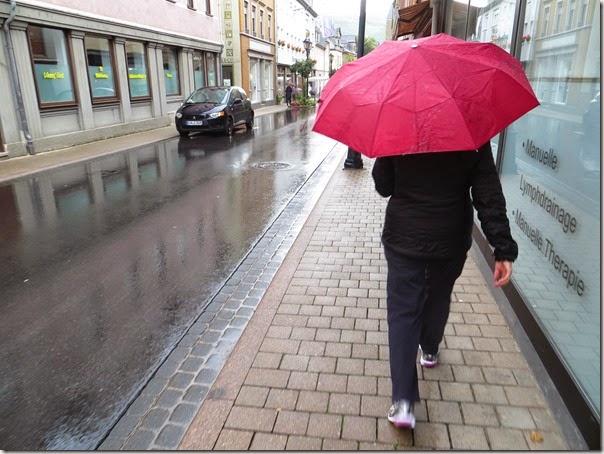 We didn’t let a little rain deter us from taking the train down to Oberwesel in search of a place to eat dinner. An explanation of this photo is necessary though. As we walked along beside each other in the rain Linda became more and more visibly upset. Finally she stopped, turned to me and said, “You keep bumping my umbrella, walk in the gutter where you belong.” Bob, who now knows where he belongs.

But then there was the other side of Linda, because as we were sitting on the bank of the Rhine earlier in the day she turned to me and said, “The next time we are here we could rent an apartment for a month.”  And that was coming from a woman who after our first time in Germany a number of years ago said she would never come back to Germany. This country is like that, the more times you are here the more you fall in love with it. 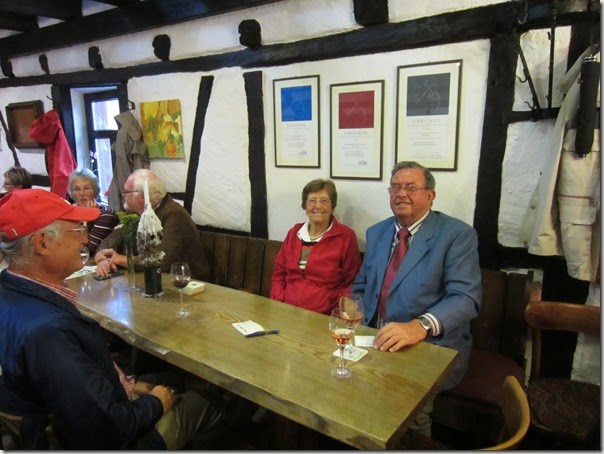 Sunday night in a small weinestube, and I mean a very small weinstube in Altstadt Oberwesel where there is far more to the story than the photo relates. They spoke absolutely no English, I speak a little German, but even so we had a fabulous time together, learning that her father fought in the German Army for four years on the Russian front in WWII. That her husband was born in Belgium and she in France. (Don’t ask, I didn’t understand that part) That he was 80 and she 79 and he has fond memories of the US soldiers giving him and the other kids chocolate bars at the end of the the second world war. That this was what they did on Sunday evening. And I should say not only them, but also many of their friends from town as a good time was had by all including Linda and I. 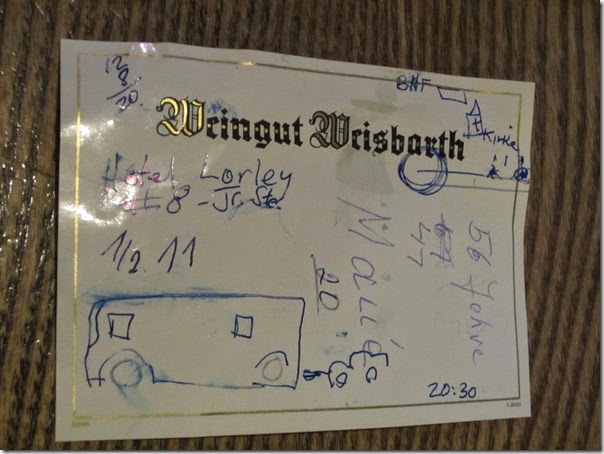 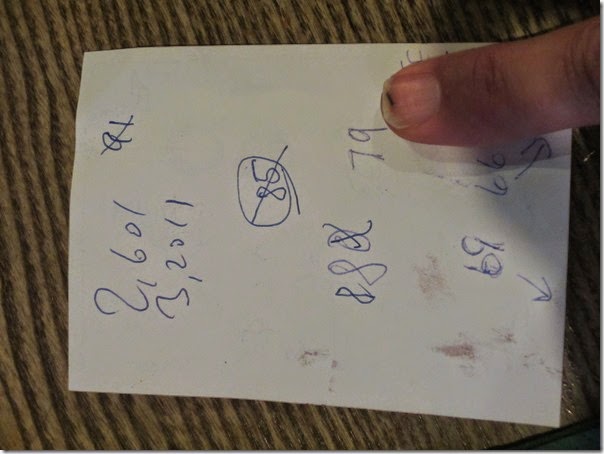 This my friends is why we travel, because we never know what Sara N. Dippity has planned for us, but we love going around the next bend in the road of life to discover what it is.