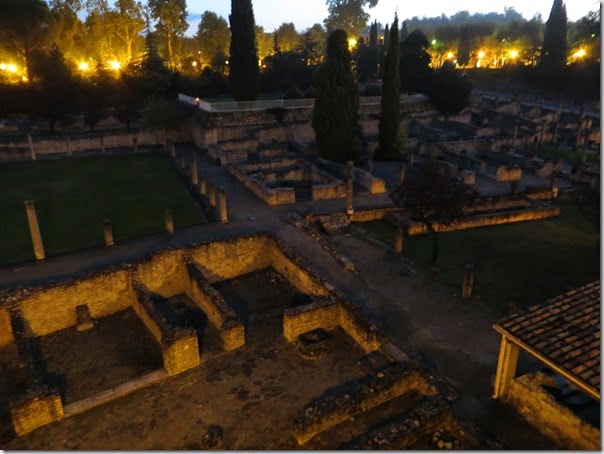 One last early morning look at the Roman ruins from our bedroom window. The highlight of our time in this area of France was spending a day getting up close and personal with the Roman history of the town. The area may be famous for it wines but neither of us found them to be to our taste with only one or two minor exceptions. 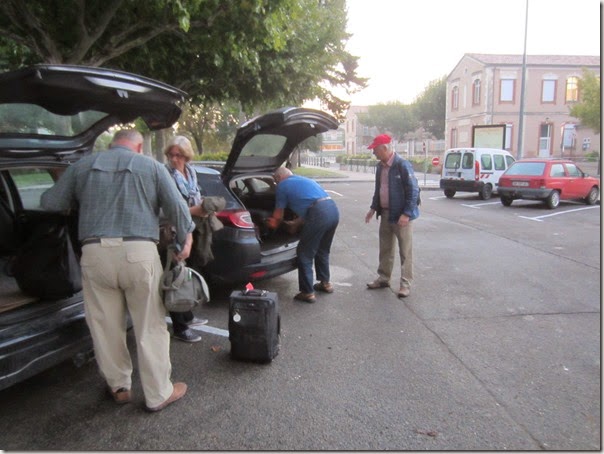 Off to the TVG station in Avignon where John and Judy will head off to Paris for another week in a big city while Linda and I head up Brittany for two weeks of Life in small towns, the country and the sea coast. 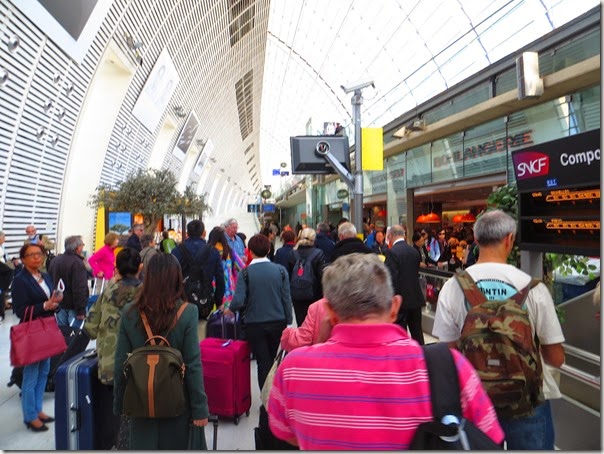 No it’s not O’Hare airport, it’s the TVG station in Avignon on a Thursday morning. You can see Linda near the middle of the photo moving through the mass of people. She may have been raised in the country, but she sure knows how to force her way through a crowd. Luckily for them she didn’t whip out her Viking battle axe and hack her way through them. Her motto: Use your elbows, they’ll get out of your way. 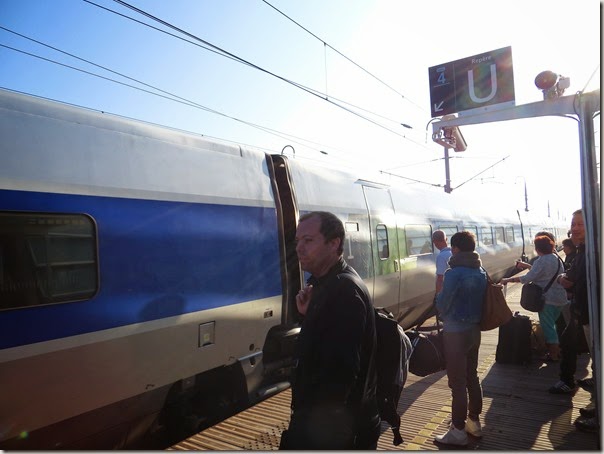 Our train pulling into the station. It was 8 minutes late. It is France. That is all that needs be said. 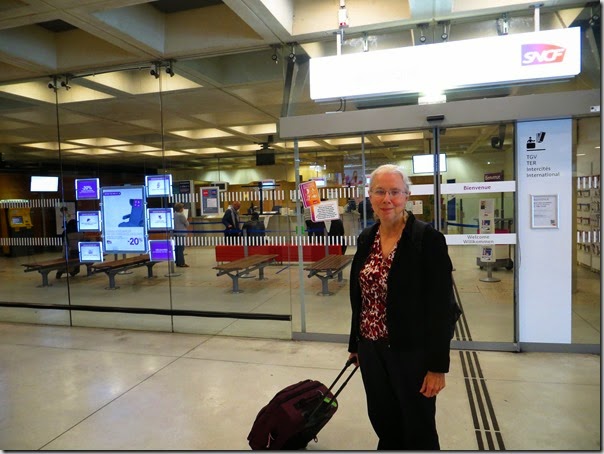 So why is there a photo of Linda in front of the SNCF ticket office in the Marne La Vallee station. The French railway system, being true to form, of course. By the time our train arrived here the train we were on was 20 minutes late. Unfortunately this was where we had 15 minutes to connect to a train heading to Brittany. As you can guess the train to Brittany left on time, i.e., before our train arrived. 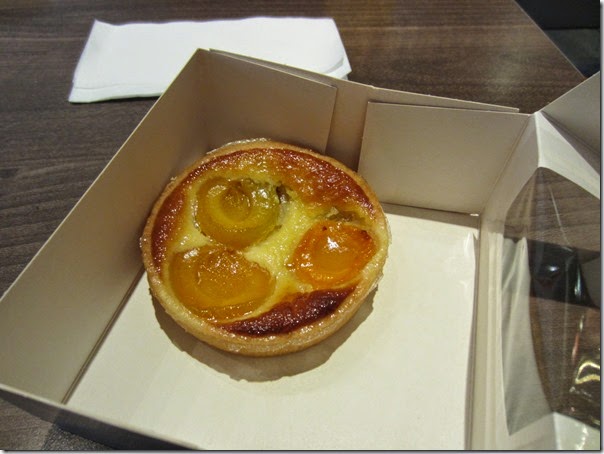 Linda, with a miniscule amount of French, you know, the kind that when you speak in the US you preface it with pardon my French, accompanied by a posture that bespoke - do something or your dead meat - managed to get the poor young girl at the counter to issue us free tickets on the next train after she had originally said we would have to buy new tickets. Sweet Linda.

Oh, I almost forgot. The apricot tart pictured above. Because the next train was in two hours it gave us time to get something to eat. I had chosen a chocolate tart for my dessert while Linda got the last apricot tart. As she was eating it there appeared a huge smile on her face. She looked up at me and said. “This is an awesome tart. I was afraid you were going to ask for it and it was the last one. You know, if you had, you were going to be in big trouble.” Lucky Bob. 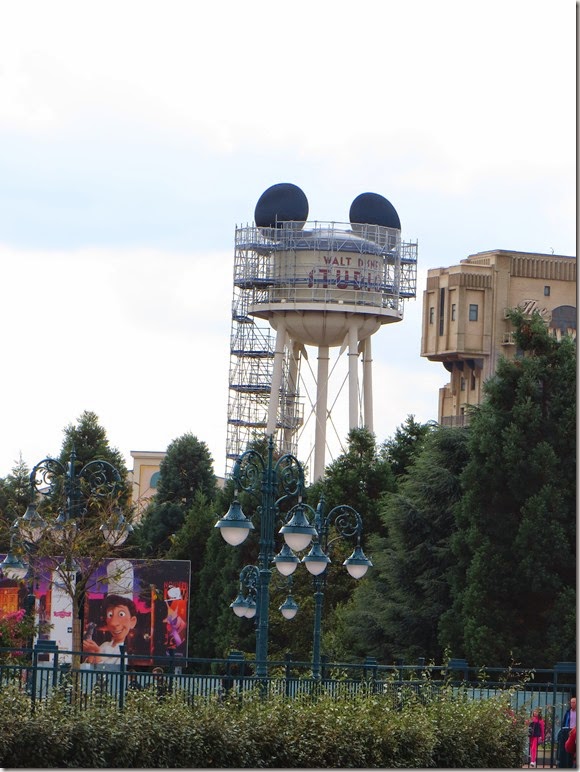 Mouse ears on the water tower near the station, and yes, it is the Paris Disneyland station. Guess we can now claim to have been to Paris Disneyland, and this is as close as either of us would ever care be. Theme parks do not float our boat. 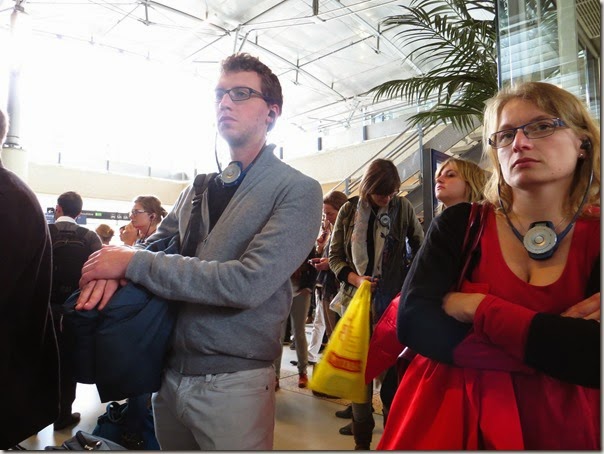 It was like one of those movies where the people move around like robots. We were sitting, waiting for the train, when this large mass of what might be called robo-humans, all with some type of tethering device around their neck, silently moved in around us. Expressionless faces, they stood silently staring off into the distance. At least I had an interesting view. 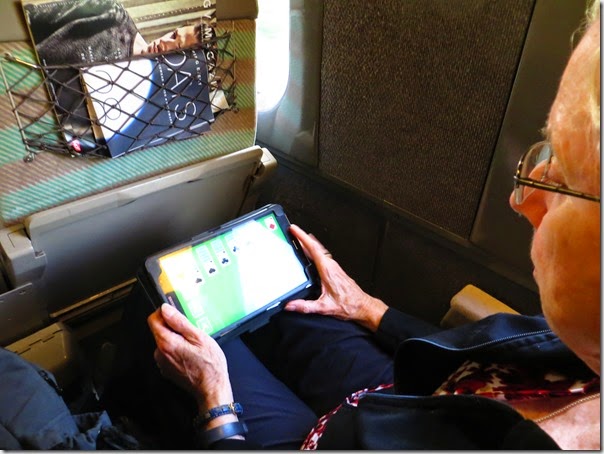 Apparently the French like to start later in the day as the train pulled into the station exactly on time. Comfortable seats, solitaire to play, Linda was definitely a happy girl. 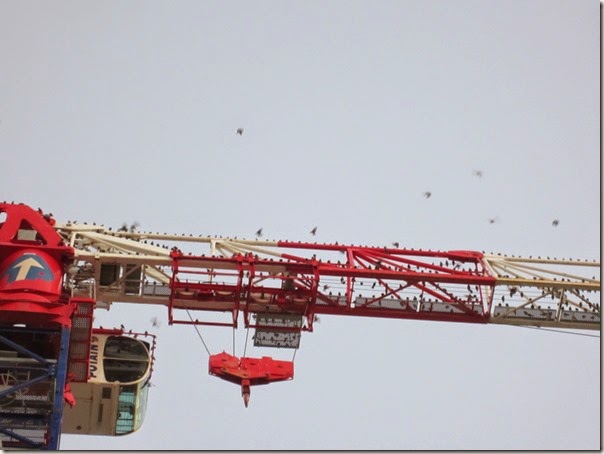 It was like a scene from the movie The Birds. Hundreds and hundreds of birds perched on this overhead crane. And, no, we did not walk under it to look up and get a better view. Being plopped on once in my younger years has stuck with me ever since. 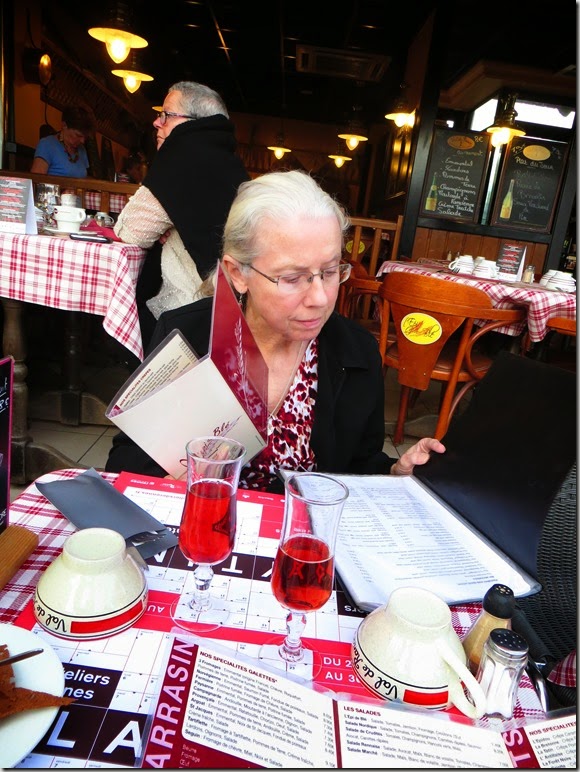 Being in Brittany means great galettes and crepes. Being in France means the menus are in French. Lucky Linda is looking at the English menu our server provided. Bob, Bob don’t need no  French menu when he is galette country. Note the kir Breton and kir Normand in front of myself and Linda respectfully. Nothing like a great aperitif to whet our appetites for the galettes to come. 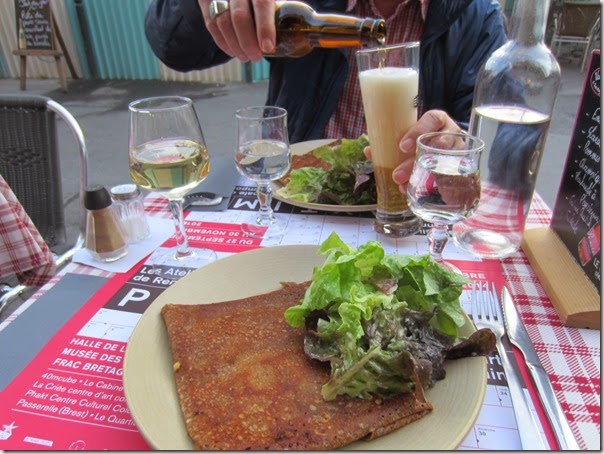 Awesome galettes. We wandered some looking for a good place to eat, discovered a side street that was blocked to traffic because of construction and in the middle of it found this great little creperie. By the time we left every table was occupied while other places nearby only had a few customers which said we weren’t the only ones who really liked it, or the peace and quiet of no traffic. Plus, no one outside was smoking!! 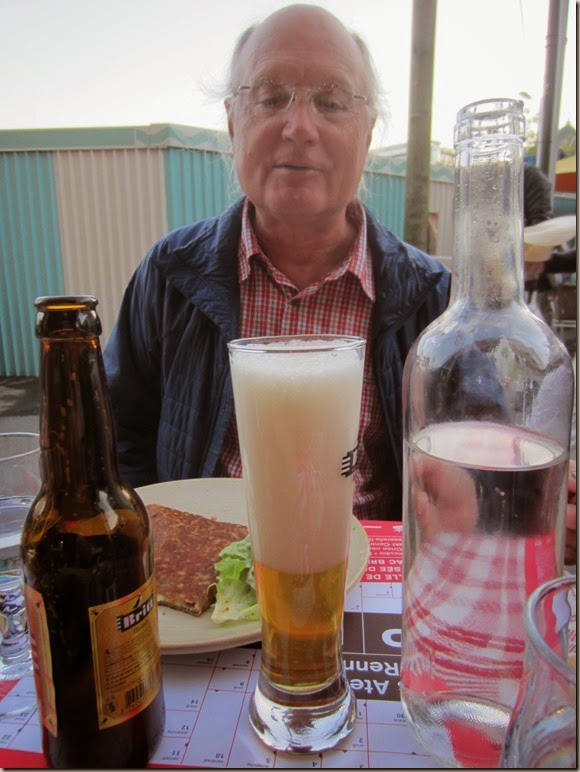 Linda laughed when I poured my beer from this region. Linda took my picture. I wasn’t laughing. Next time I will order cidre and get the last laugh. 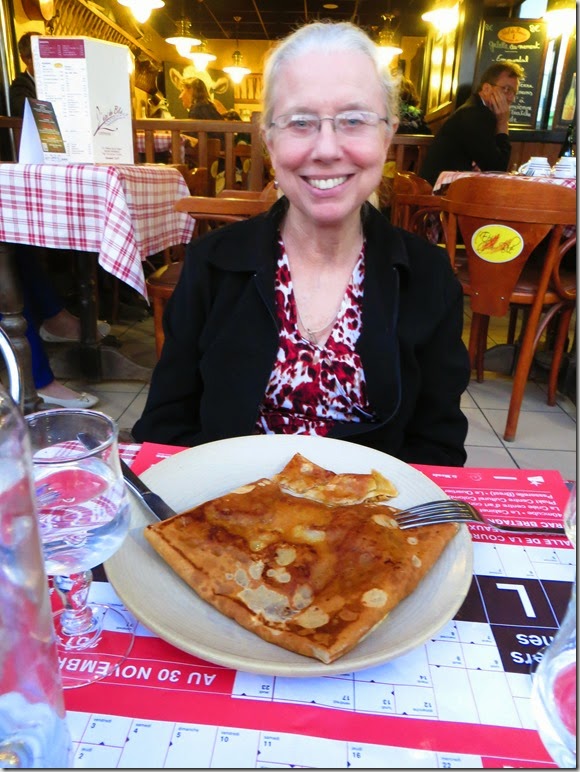