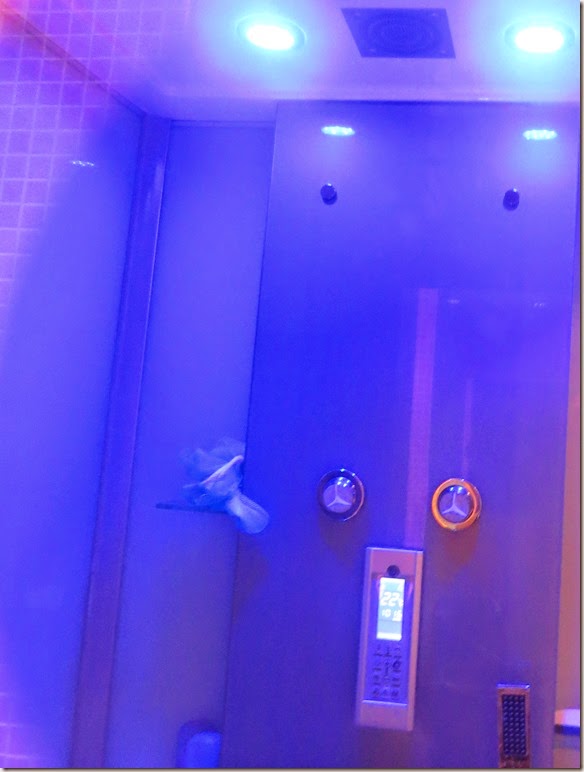 A hazy photo of our psychedelic shower. Nothing like getting up in the morning and having French pop music, ever-changing colored lights, with water raining down from above one minute and then blasting from the side the next to wake us up but good.

A certain person was taking their shower when I decided to take this photo, wanting to capture the fog effect of the water in the air, and being a good spouse, I waited until said person was bent over shaving their legs before taking the picture. Putting it delicately, I seemed to have aimed the camera a little lower than intended, which necessitated the deletion of the first photo and the taking of a second one. 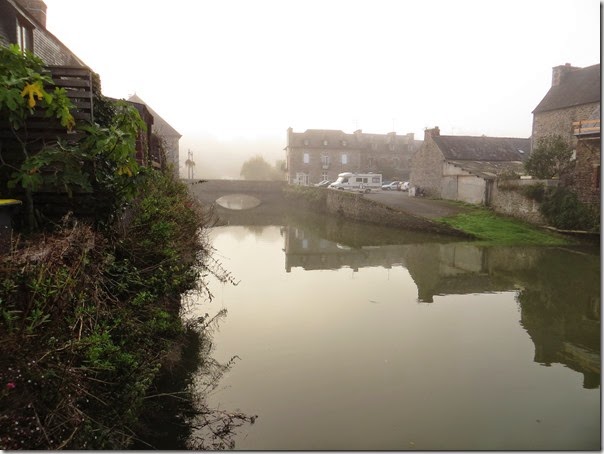 The tide was in this morning, the still water reflecting the scene on the opposite bank and the fog giving it all a soothing softness. What an awesome place to enjoy the morning’s first cup of coffee. In the words of that now famous advertisement: Priceless. 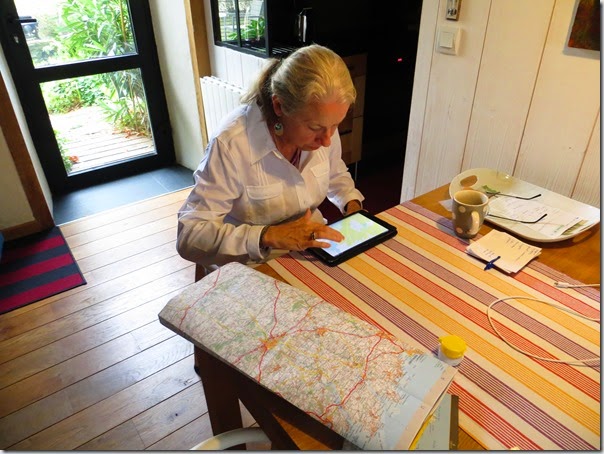 Our plans for the day called for looking for rocks. Not just any rocks, rather the huge menhir that were placed by the prehistoric peoples living in this area some 7000 years ago. Linda was a happy camper, using our paper map, websites and previously taken notes to plot the area where they should be. We selected three sites around a town some distance south of here for our first foray into menhir hunting. 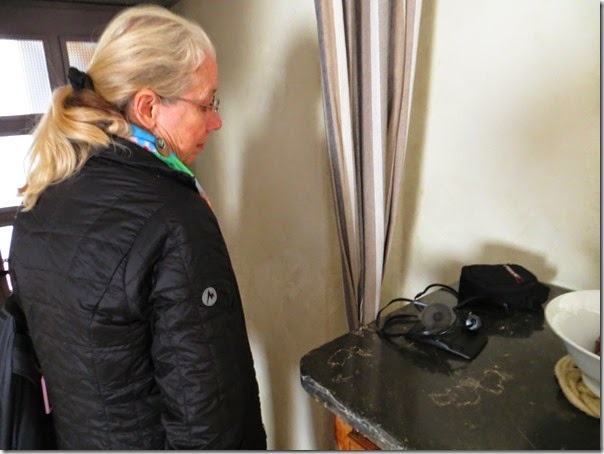 Terrible Tommy was made to stand in a corner today. He threw a temper tantrum yesterday, trying to have us turn onto roads that didn’t exist, so this was his punishment. Hopefully he will use the time to reform his bad habits. The more we learn about Never Navigated the more we like her, especially since she seems to be a very adept pupil as well as teacher. Yes, we had a lot to learn about using her, but the more we learn the more we like her. Depending on how she does today we may have to rename her Novice Navigator. 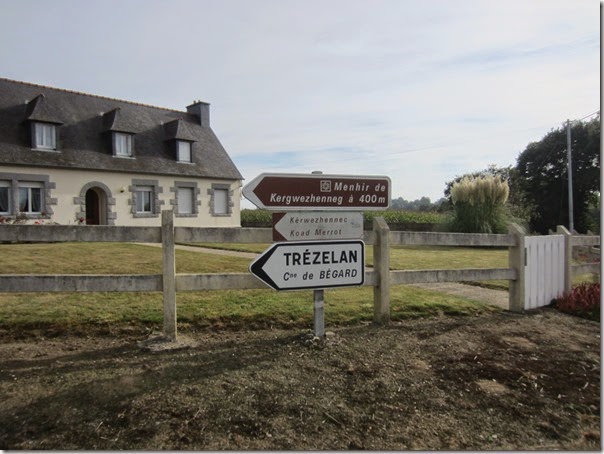 It took a while. It took some wrong turns. It took getting slightly lost. But in the end we were rewarded with the sign we were looking for. 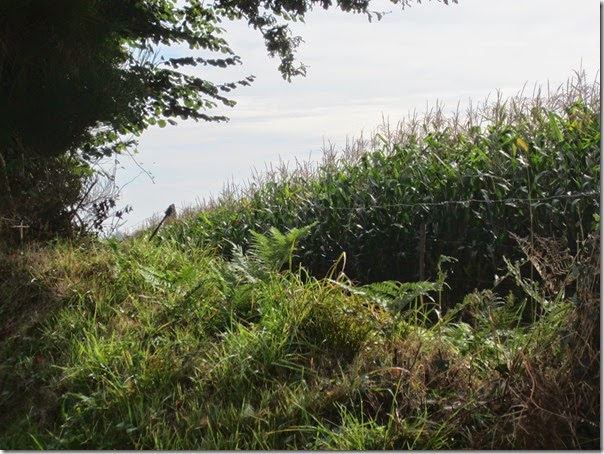 Of course finding the sign is one thing, actually finding the menhir is another thing altogether. At last we did find it, it’s top barely sticking out of this cornfield. 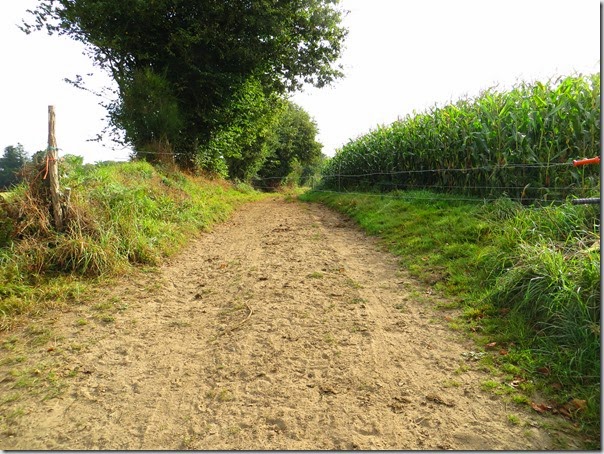 It’s down there somewhere. The first obstacle was scrambling under the electric fence across the lane. Linda learned she was far more flexible than she ever thought. I was afraid for while she was going to ask me to lift it up so she could squeeze under it, but being a woman on a menhir mission, she turned into an olympic gymnast and was under it jiffy quick. 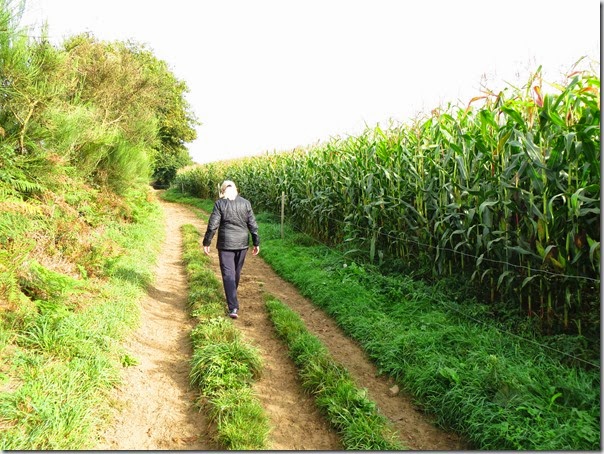 Woman in black on a menhir mission. To enter the cornfield she had to climb through a second electric fence. 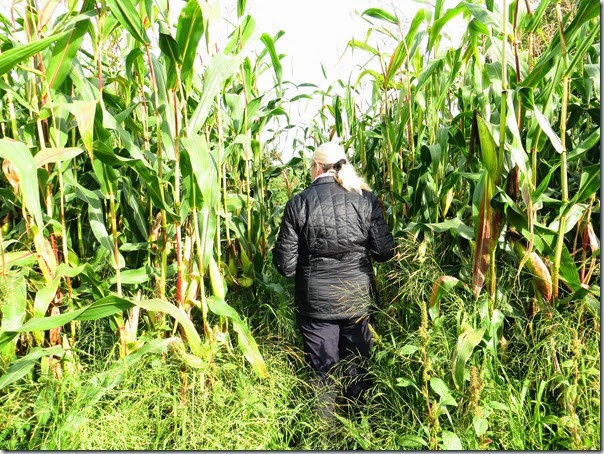 There’s a menhir in there somewhere and this woman is going to find it. 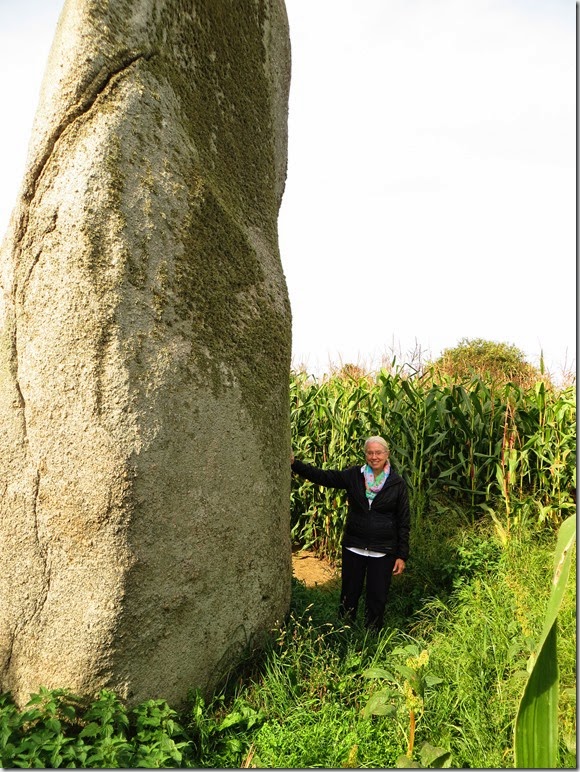 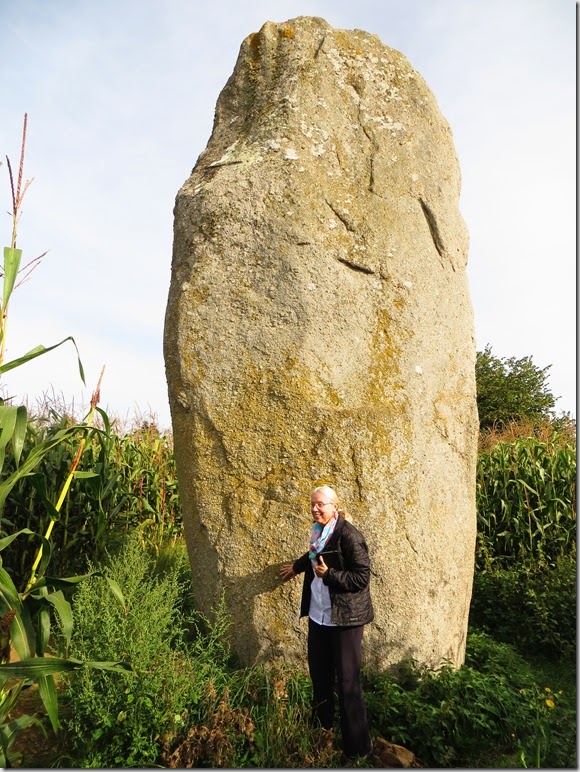 It’s hard to imagine the amount of effort involved in dragging this rock here from many miles away some 7000 years ago. 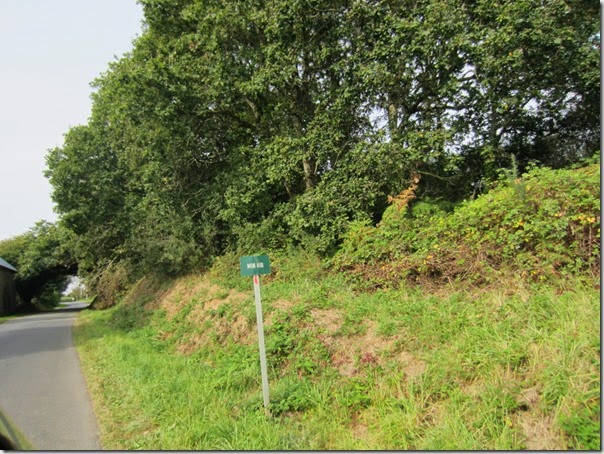 Maybe we were lucky with that first find as our second attempt was a bust. We did find this small sign alongside the road, but only after really wandering around the countryside as we weren’t even sure which road it was on. However with the high bank along the road lined with a dense mass of blackberry brambles, there was no way we were about to challenge them. But since there are several thousand menhir in Brittany, it was off to find the third one she had picked out. 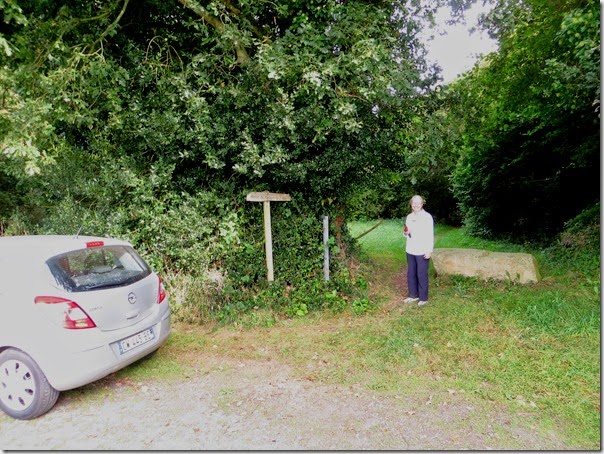 The third time is a charm. It had a sign and a little pull-off, unfortunately traveling in the direction we were going we were past it before we realized what it was. Think very narrow, curvy road with very high earthen sides, so no place to turn around for some distance. But eventually we were parked and ready to hike back to it. 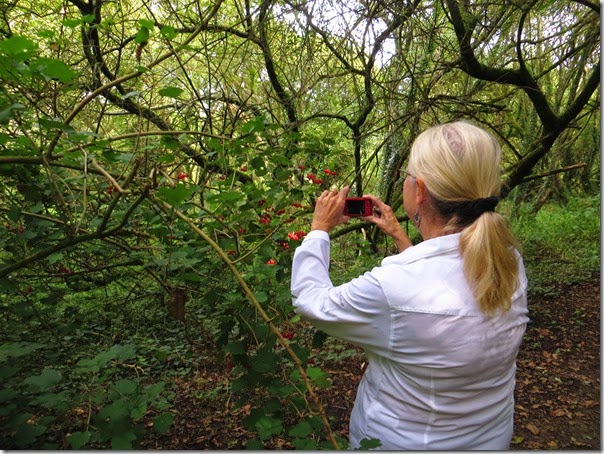 It wasn’t far before Miss Nature Photographer was doing her thing. 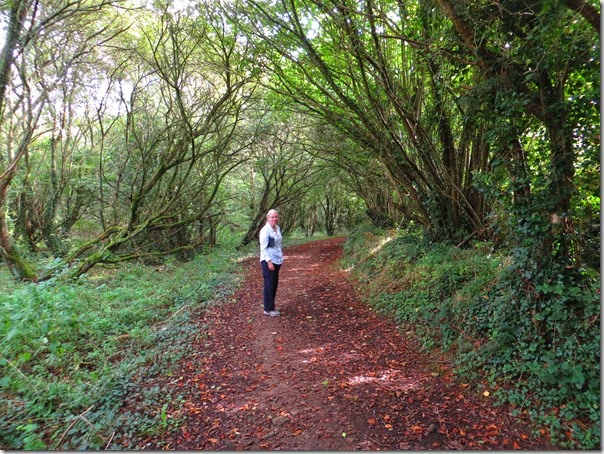 Museums are nice and we enjoy visiting them, and we also like to explore the side streets and non-tourist areas of towns, but what we love most all are adventures like today. Talk about a beautiful trail, this was it. And a beautiful woman too. A walk in the woods isn’t just a walk, it is much more. 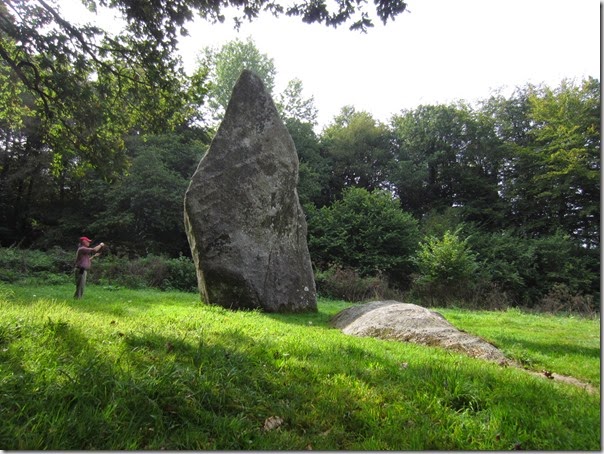 Then in the middle of the woods there was a clearing and in the clearing stood this huge menhir. At 7.6 meters it is one of the tallest standing stones in Europe. Being here sure made Linda’s day even better than it had been. And we didn’t even have to climb through any electric fences to see it. 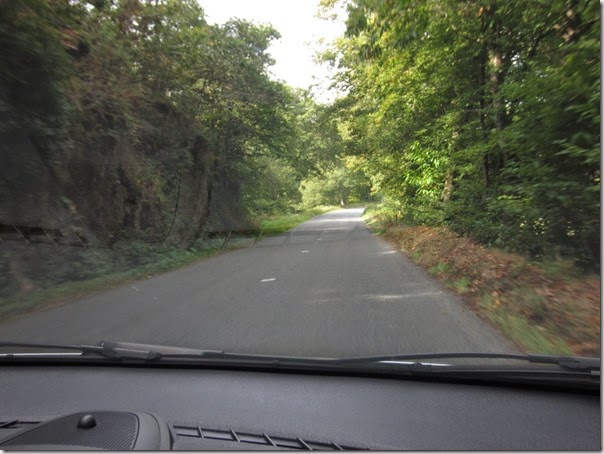 We had now visited the three menhir we had mapped out so what to do next?Looking at the map we spied a small crook of land sticking out from the coast about 40 kilometers away. There was a road going out to the tip, so that was where we decided to go. Why you ask? Just because we can. To get there we stuck exclusively to the back roads, after all, we are here to enjoy Brittany, not to rush from place to place. 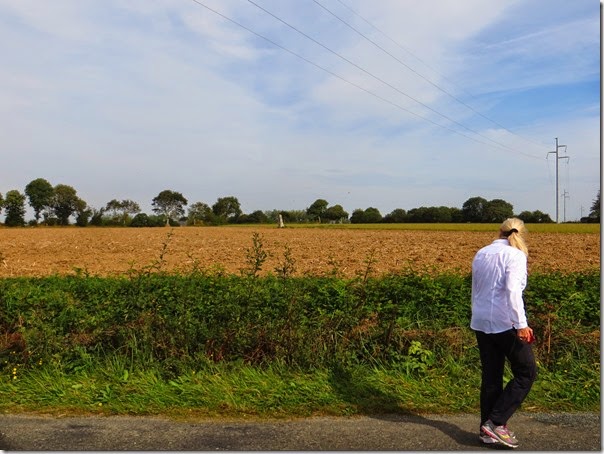 So what’s wrong here, did the car break down or something? No, but as we were driving along Linda spied a menhir back in this field. Once we found a place to pull into a nearby farm field it was off to see it. 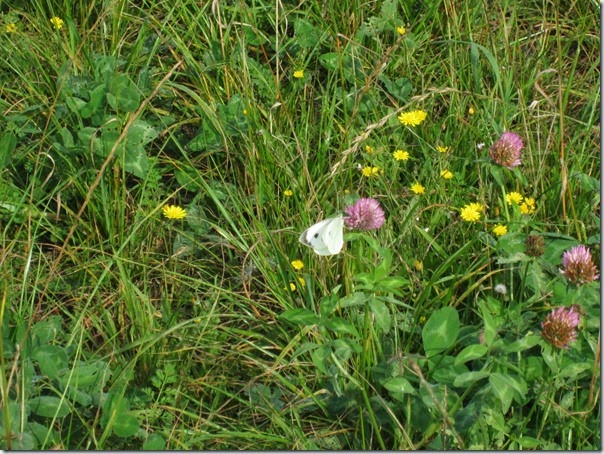 Sometimes butterflies perched on flowers can interrupt even the most ardent menhir hunter’s search. 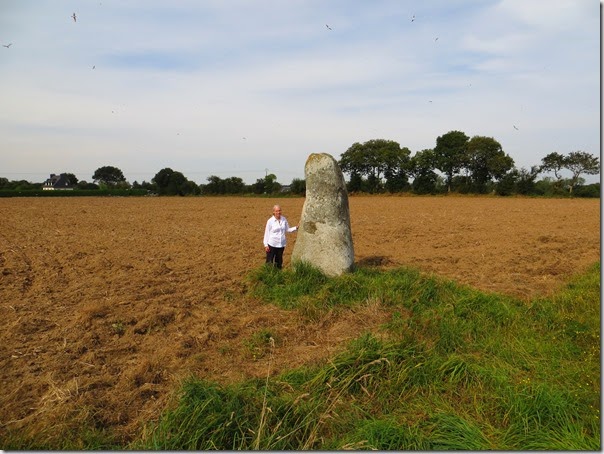 The “touch’ is extremely important. There is no better way to connect to the distant past. And who knows, Linda may very well carry some of the DNA of the people who erected these stones. 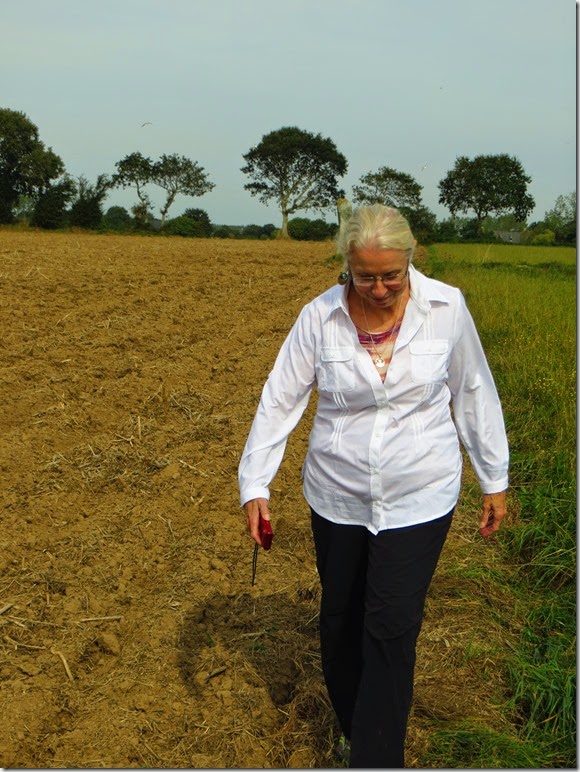 Pictures taken, stone touched, mission accomplished. And she walked out of that plowed field like a true farm girl. a little rusty perhaps, but a farm girl nonetheless. 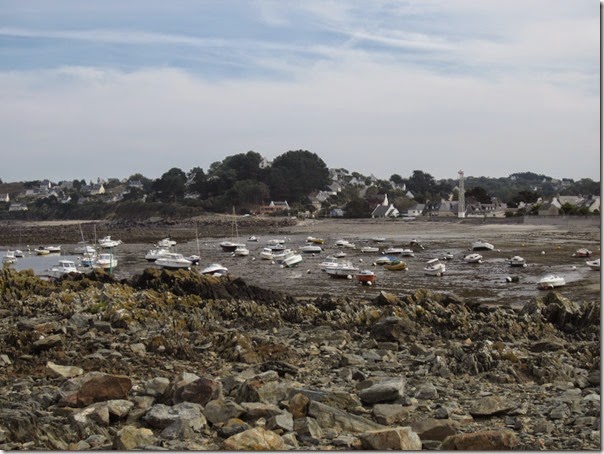 Bob and Linda, the seashore and low tide seem to be running in the same circles. 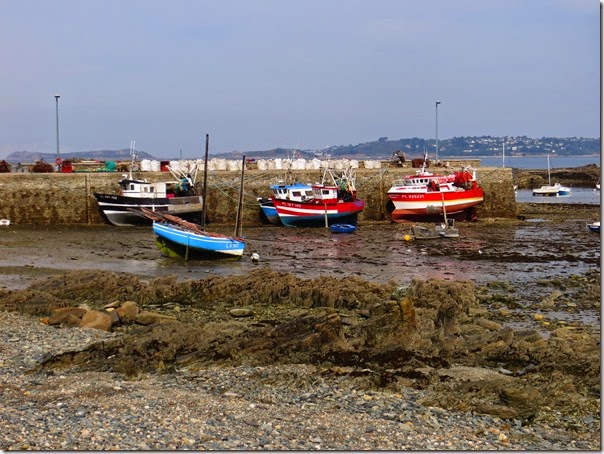 Once again we had a great time exploring the seabed, the rocks and the boats, and it wasn’t until after 2 o’clock that we felt the urge to once again find that perfect little restaurant. 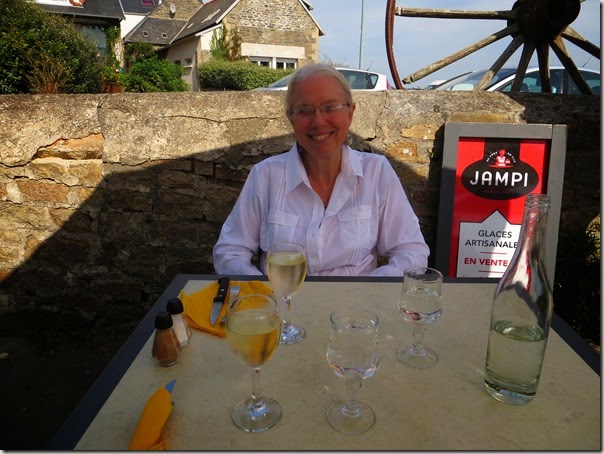 How do we get so lucky? Only one café and it was great, plus we got a terrace seat close to the water’s edge even if there wasn’t any water. Once again, no English spoken and no English menus, but the wine was just as we like it, and how can you go wrong ordering galettes. 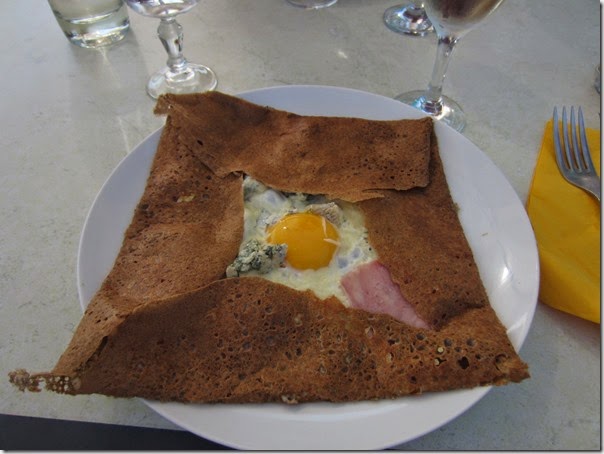 I am quite opened minded about food, but one thing I can barely stand to look at is an egg yolk due to an unfortunate incident in my youth. This is obviously Linda’s galette, but she pronounced the ham, bleu cheese and egg as good as it gets, which I will leave 100% to her judgment. 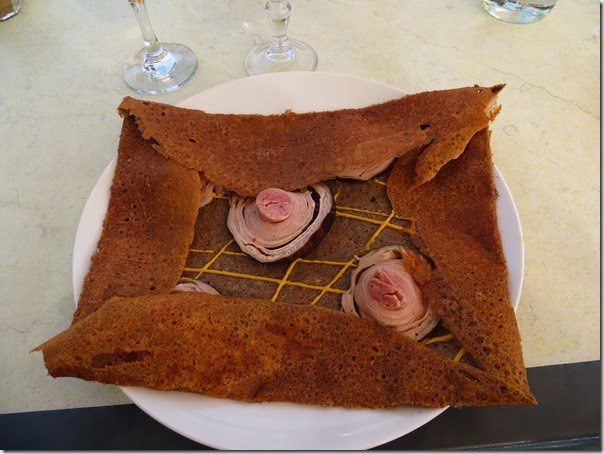 It wasn’t intentional, but she looked at my choice of an animal innards galette the same way I looked at her egg yolk. By not looking at it. I didn’t think there was enough mustard on my galette until I took the first bite of it. Talk about powerful mustard, this was that and more. Not exactly sure what animal innards this was and I don’t really want to guess though I have my suspicions, however it actually tasted very good. The opinion of which Linda left solely to me. 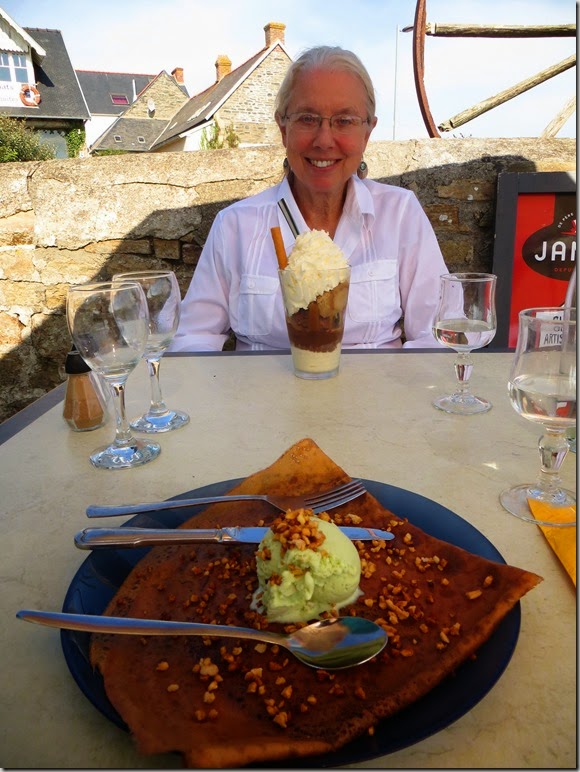 Great galettes deserve to be followed by great desserts and we were up to the task. 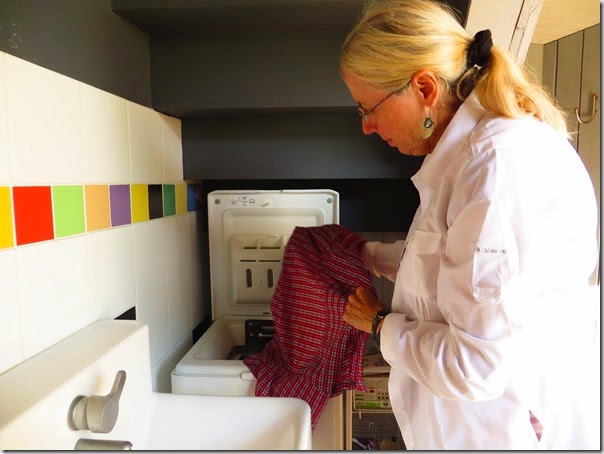 Early evening back at the gite and Linda decided to do a load of laundry. The washing went well, but unfortunately neither of us could figure out how to open the washer after it completed its cycle. Linda finally said maybe it is like the one in the coach and just needs to be left alone for a couple of minutes, then it will open.

I tried to read the manual but it was all French to me. Linda finally started turning knobs and low and behold, it wasn’t long before the lid popped open. Isn’t a woman’s touch an amazing thing? 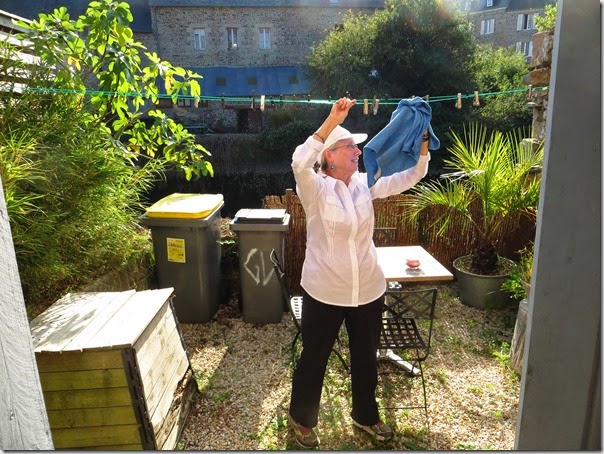 Life isn’t a dress rehearsal. Every day you waste is a day you will never get back.