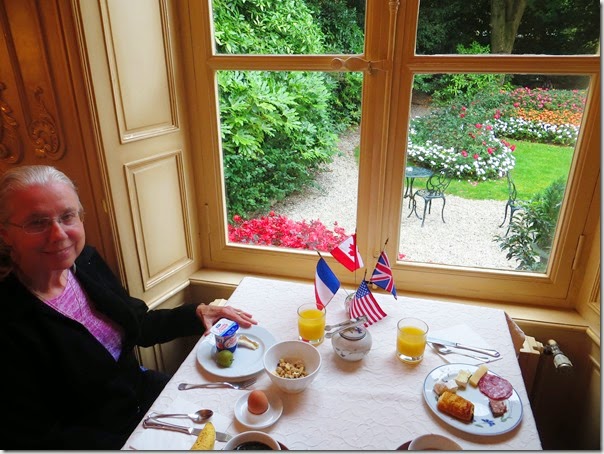 Arromanches is where the famous floating harbor was constructed during the battle of Normandy. There are remnants still visible though only at low tide. My wife stopped mid chew and said, “Low tide is in a few minutes. If we leave soon we will have plenty of time to see what’s there because it’ll be six hours until high tide.” 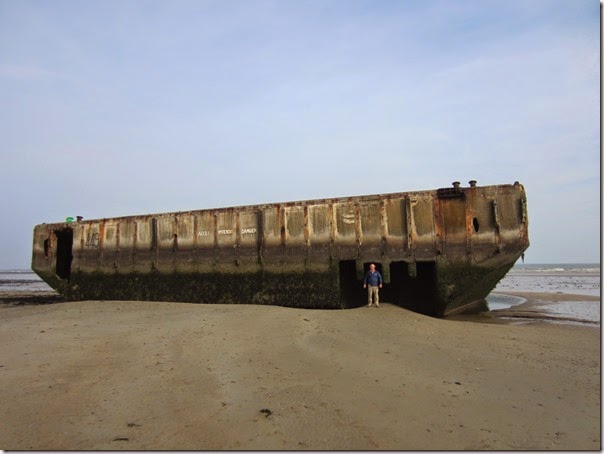 Sure enough, at low tide you could find a few remains. 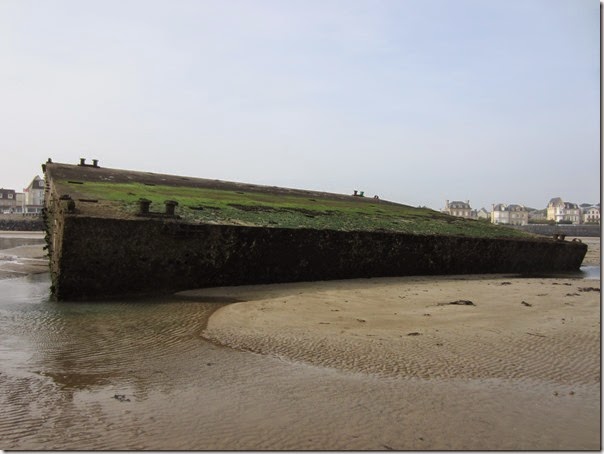 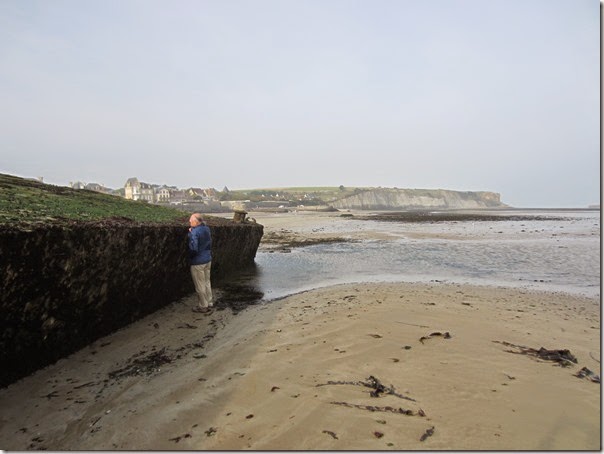 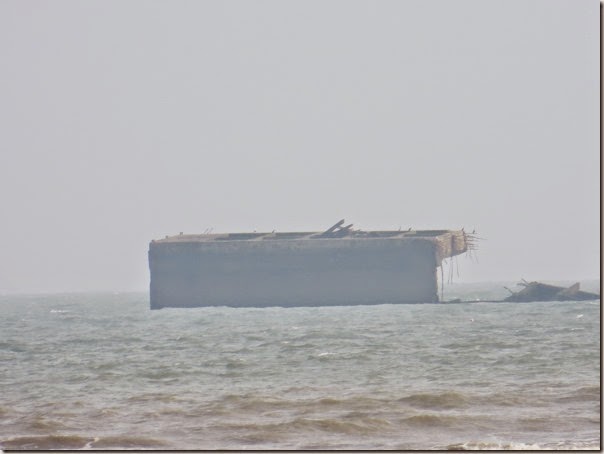 Out in the water there are several dozen of the original 115 giant concrete structures  still in place. Shortly after D-day they were towed across the 90 miles of English Channel and sunk in an arc to form the breakwater for a temporary harbor. 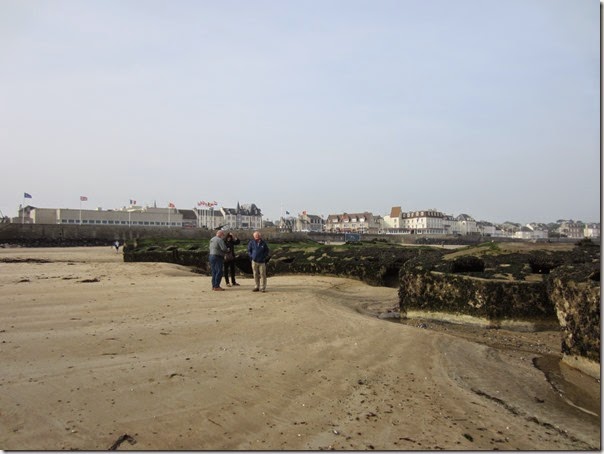 Smaller floating concrete structures served as pontoons to hold the steel sections which formed the roads leading to the beach. The pontoons may have been made of concrete, but they floated because they were hollow inside. and no that wasn’t an obtuse reference to the head sticking out through the opening. 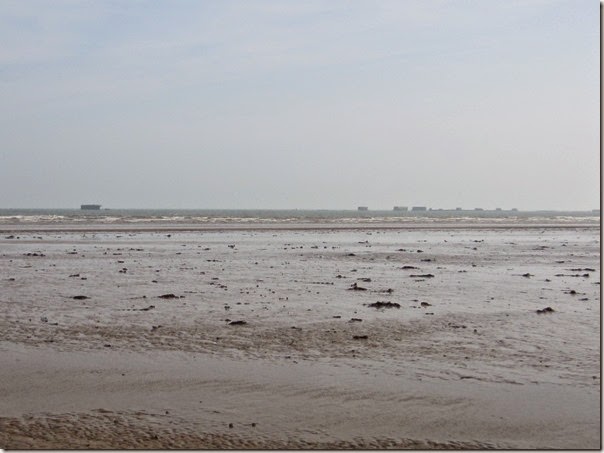 Today there is a broken line of concrete sentinels on the horizon. 70 years ago the view would have been filled with ships, piers, floating roadways and the constant movement of trucks, tanks and men coming ashore with the ambulances traveling in the opposite direction carried the wounded out to the ships to be evacuated to medical facilities in England. 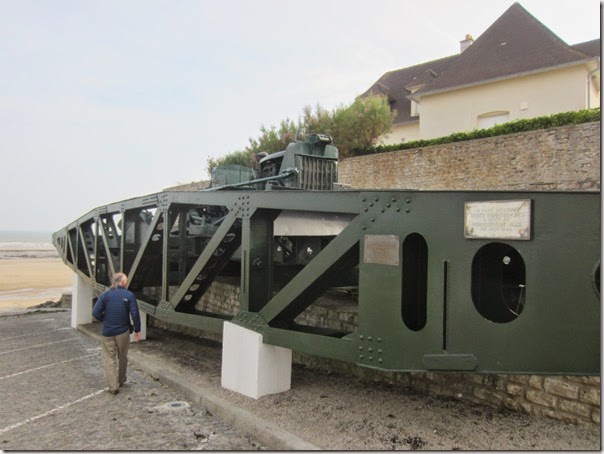 One of the steel sections that made up the roadway. 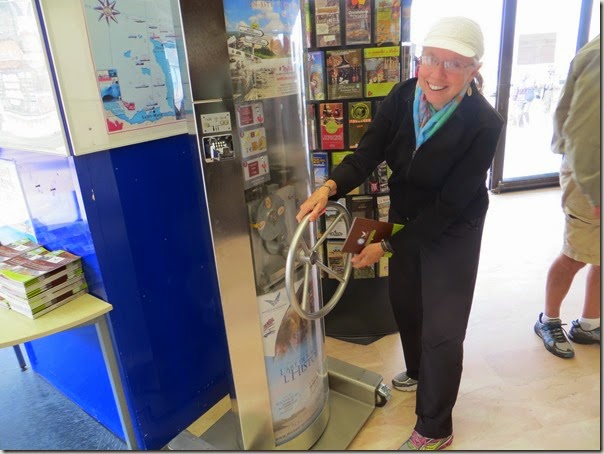 Somebody is going to get another smashed penny. 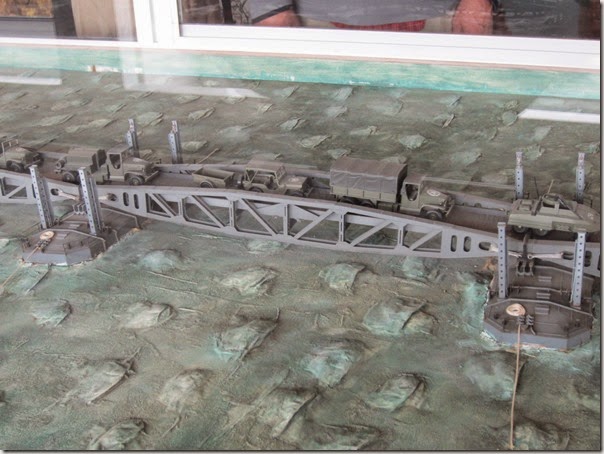 We also visited the nearby museum which had models of different sections of harbor. This is a section of the roadway with piers that were designed to be placed in rocky sections of the beach. The amount of engineering that went into designing something that had never been attempted before was awesome. it was also never tested before it was actually deployed in Normandy, and all this was done in total secrecy to keep the Germans from learning anything about the Allies invasion plans. 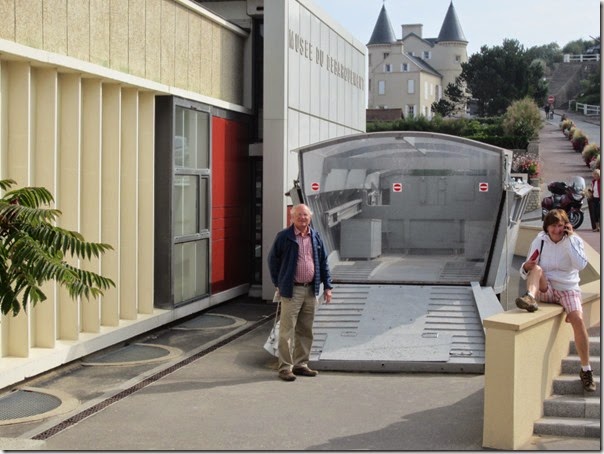 Walk around the beaches of Normandy and you never know what you see. Here is the gapping opening of a Higgins boat. 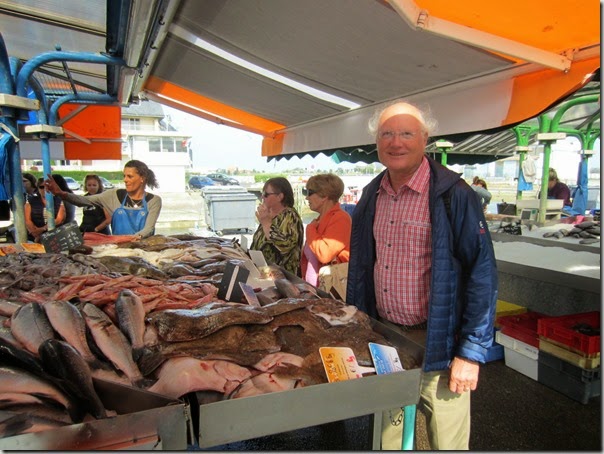 At the fish market. I know people in my life have on occasion referred to me as a angel, the person taking this photo excepted, but it wasn’t until I saw this photo that I realized how correct they were. Really, it’s as if you can see the halo around my head. And aren’t those angel wings fluttering above my ears? Angelic Bob. 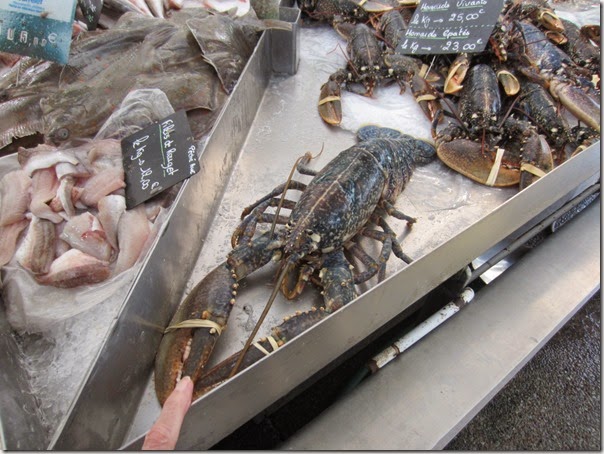 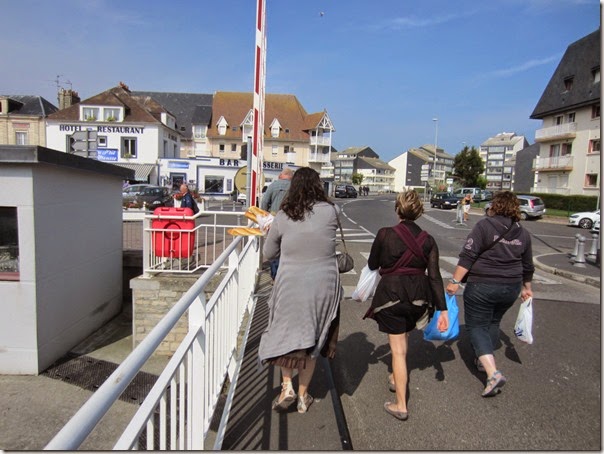 Another of those, your guess is as good as mine, Linda photos. It would probably take a big imagination to come up with what it was. 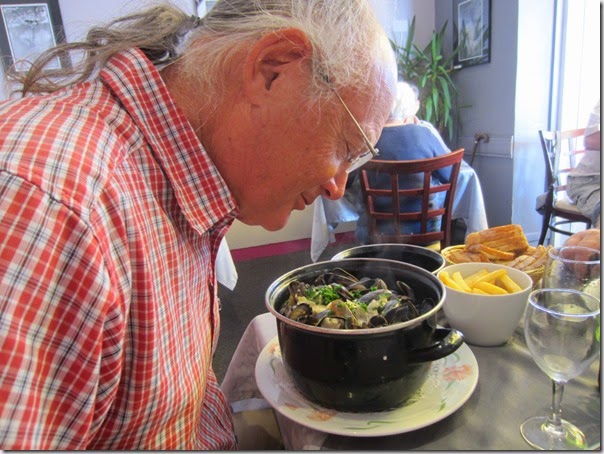 Did the moules I had for lunch ever smell good.

In my infinite wisdom I decided to use the half moule shell method of eating my steaming pot of moules in cream broth. In Linda’s mind it was a thing worth recording for posterity. Just call me Bob the Moule Fool. (moule rhymes with fool) 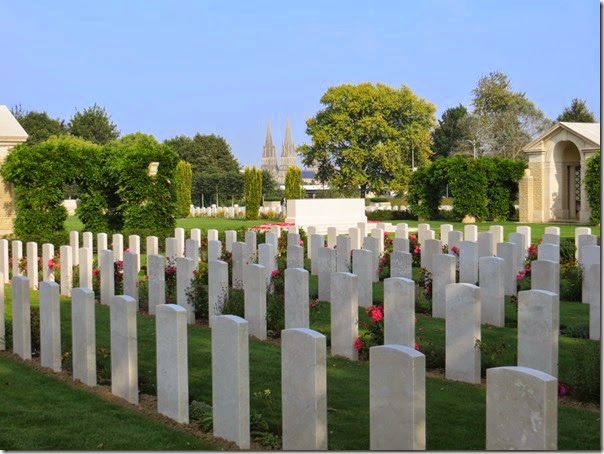 We had not visited a British War Cemetery in France, so in the late afternoon we walked over to the one located in Bayeux. While it was different from the American War cemeteries we have visited, it was no less poignant. 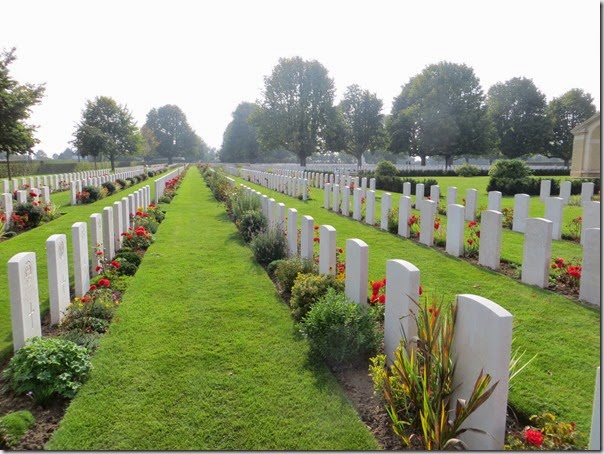 The rows of rectangular markers are bordered with flowers. The graves are often grouped together with soldiers of the same unit who died on the same day buried alongside each other in the row. At the bottom of the marker there are words from the family of the soldier, a few simply “In Remembrance”, some have no words, but most are heart wrenching. 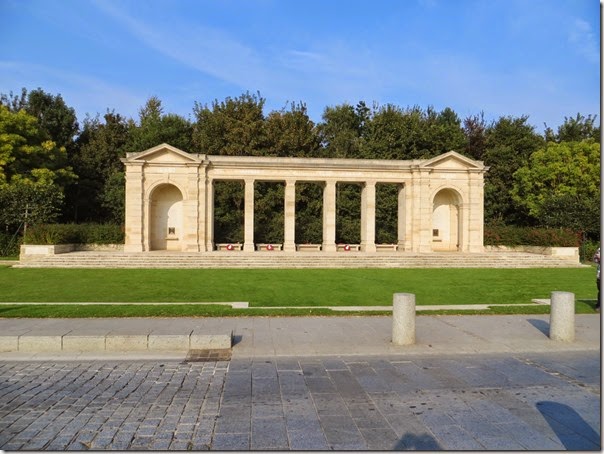 Opposite the front of the cemetery is this memorial that lists the names of the more than 1,000 British soldiers and sailors whose bodies were never recovered. Across the top of the memorial is a Latin inscription that can be translated: “We, once conquered by William, have now set free the Conqueror’s native land.” a reference to the fact the French Norman King, William the Conqueror,  crossed the channel and defeated the English King, Harold, at the Battle of Hastings in 1066. 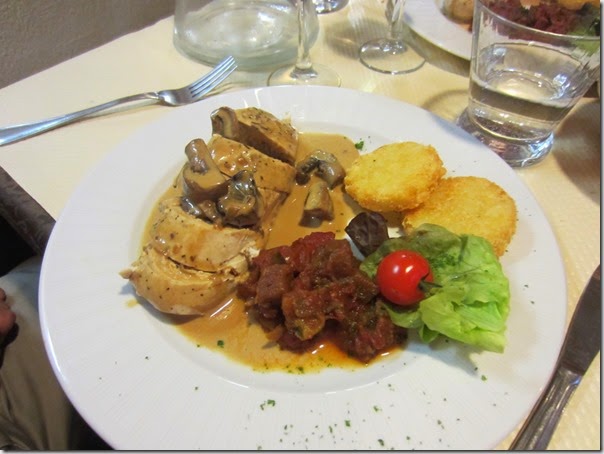 I just can’t say enough about how much we enjoy the cooking of this region of France. Tomorrow we will head out, but the food of the region will remain with us till we return again, which we will most certainly do.