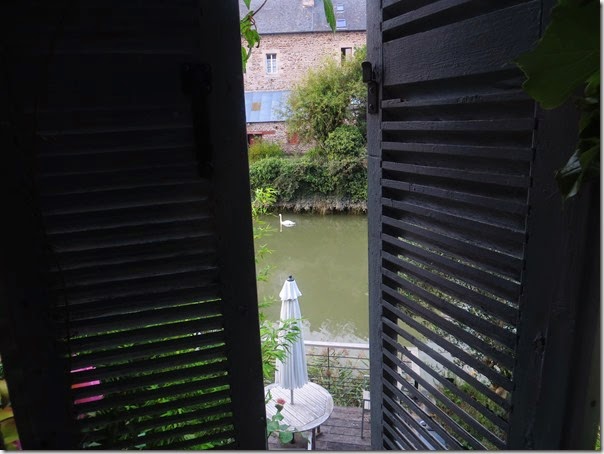 The tide was in this morning when we looked out the window of our bedroom. And yes, that is a swan in the water. Talk about pinch me places, this is definitely one of them. How do we get so lucky? 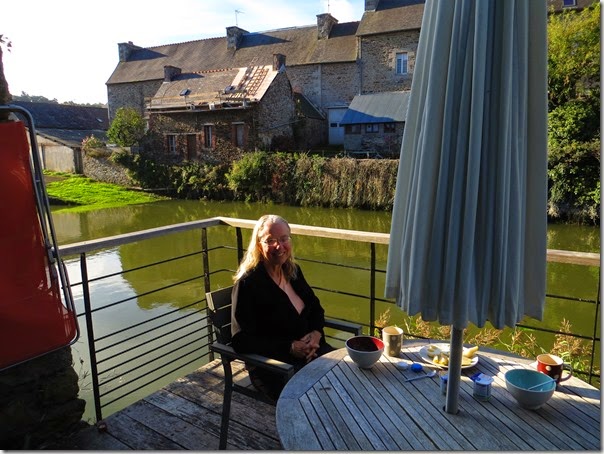 It’s a tough Life but somebody has to live it and it looks like Linda is up to it. 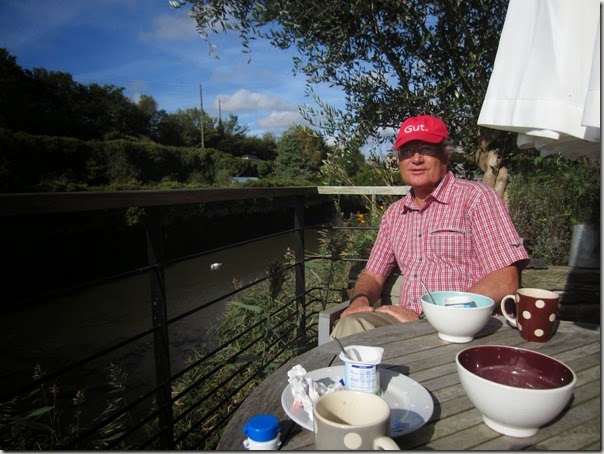 I was also able to put up with the sunshine, river, peace and quiet, good food, and great coffee along with the wonderful woman who is my wife. Lucky Bob. 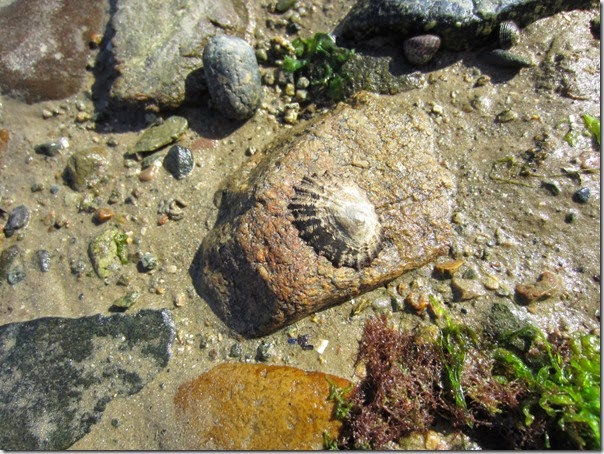 Brittany has almost 1800 miles of shoreline. So what did we do today? We headed towards the shoreline. The area we decided to explore today was a rocky section northwest of where we are staying. As luck would have it we arrived during low tide and it wasn’t before we were out exploring. Linda’s favorite quickly became these mollusks that were found attached to many of the exposed rocks. 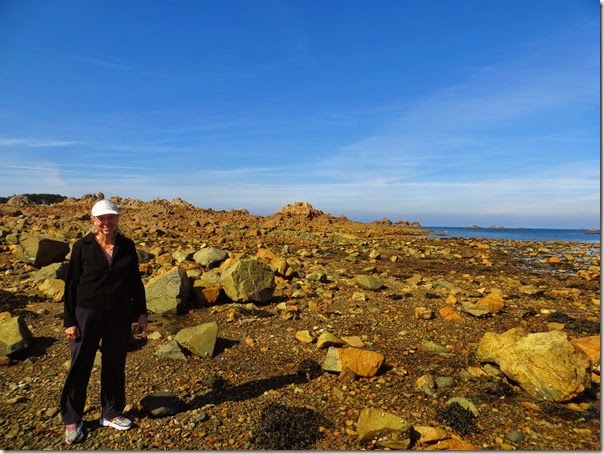 Rocks? Did I say rocks? There were rocks everywhere, and in all sizes, shapes and colors. 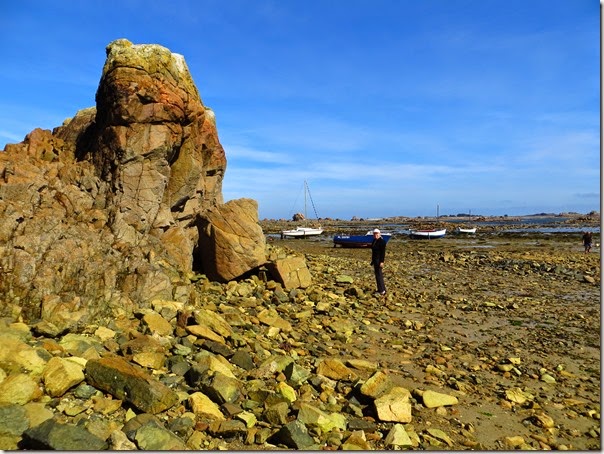 Linda had more fun than a kid should be allowed to have, climbing over, around and among the rocks. 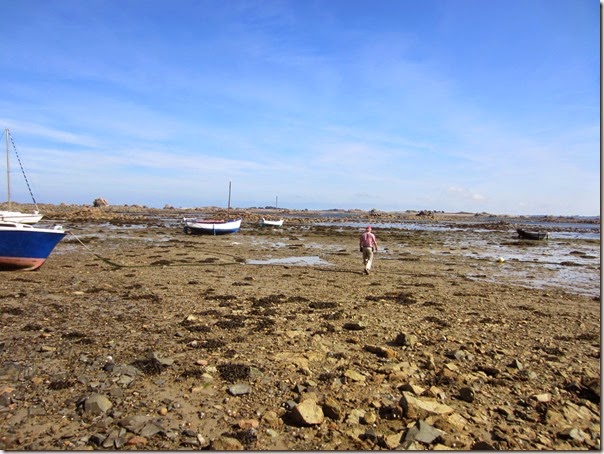 Meanwhile I was headed in the opposite direction following the siren call of the sea. 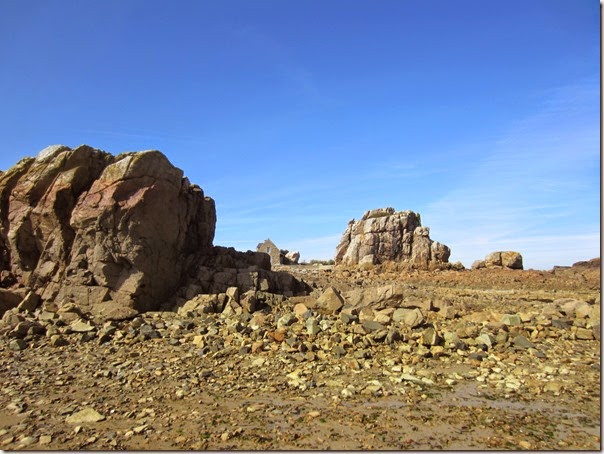 Linda is back there somewhere. 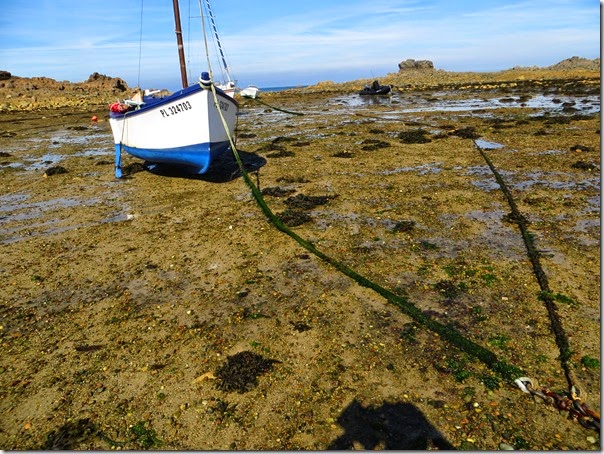 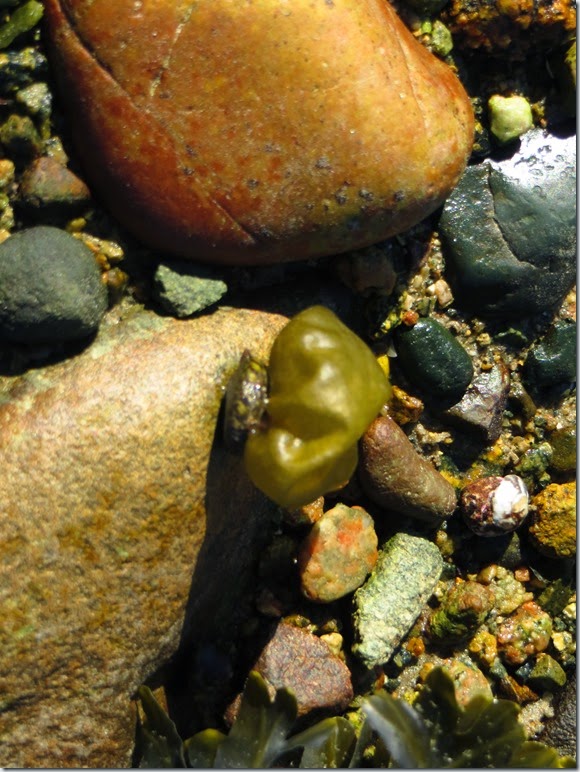 We don’t know what it is but it moved like a snail and had this little bag that inflated and deflated. The seashore was so fascinating and we wished we had beach shoes so we could have better explored the tidal pools. That just gives us another reason to return to Brittany on our next trip to Europe. 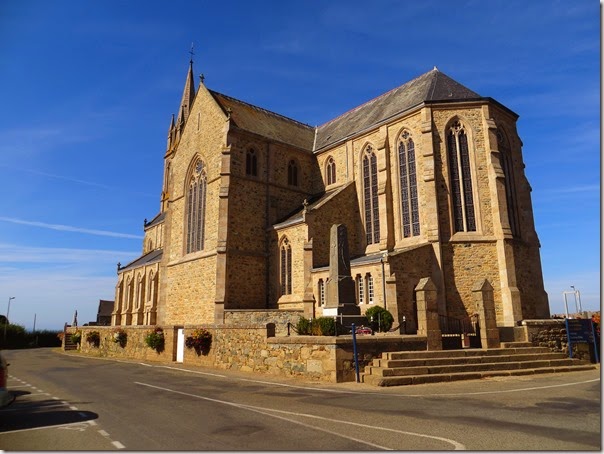 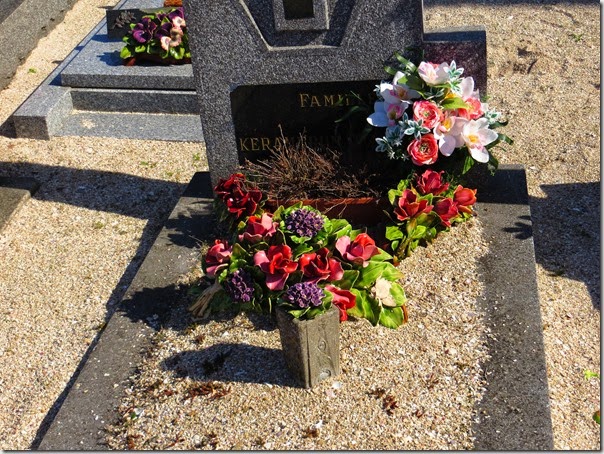 In the cemetery beside the church Linda couldn’t get over how pretty the ceramic flowers were that adorned many of the graves. 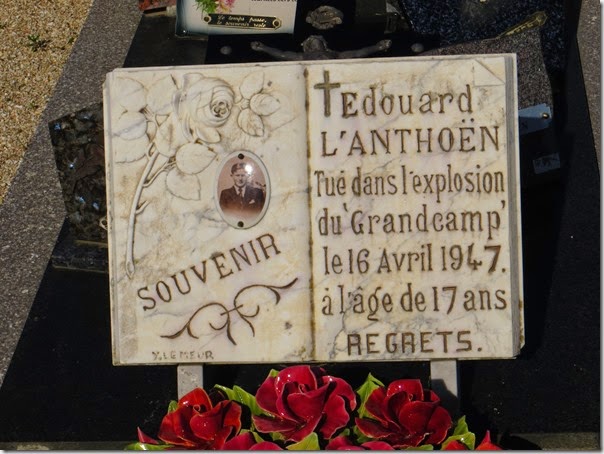 Marker on one of the family graves. This young man was a crewmember on the French ship “Grandcamp”. It was the ship carrying ammonium nitrate fertilizer that caught fire in Texas City, Texas in 1947 and blew up destroying itself and much of the town while killing over 500 people. The explosion was so horrific the ship’s anchor, which weighed 1.5 tons, was hurled over a mile and half away landing on the other side of the town. 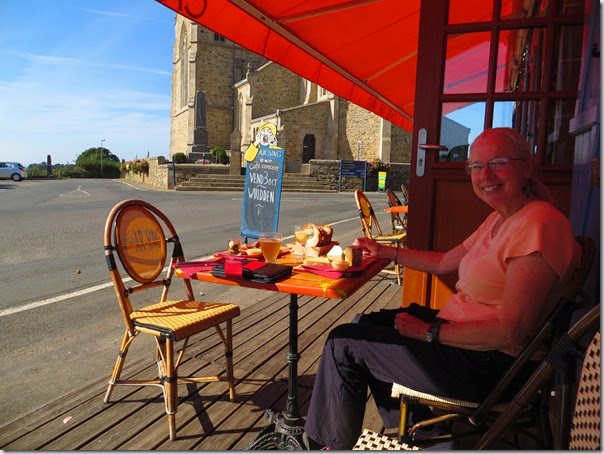 There wasn’t any place to eat along the section of coast we were at. Heck, there weren’t even any towns either. But a short distance inland at the “Y” intersection where the church stood was this little café. 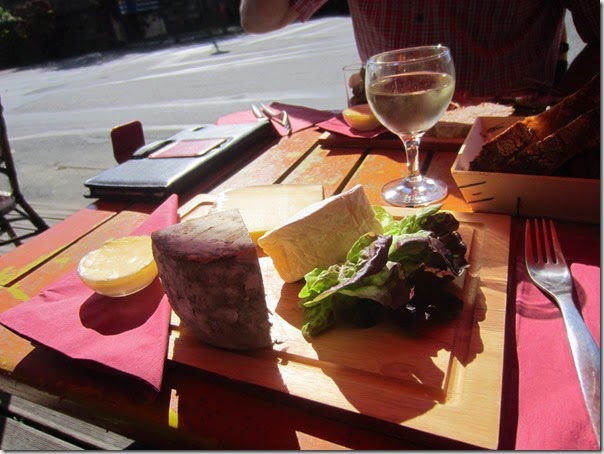 Linda had a cheese plate while I had a meat plate. Or maybe I should say cheese and meat boards as both were served on cutting boards. Linda had a glass of the house white wine which was absolutely wonderful with a crisp refreshing taste. For a region that doesn’t produce wine they sure do serve wonderful wine in the various eating establishments. I opted for the local sour cidre, which once you get past the shock of the first sip is really quite good, though not quite good enough for me order again. 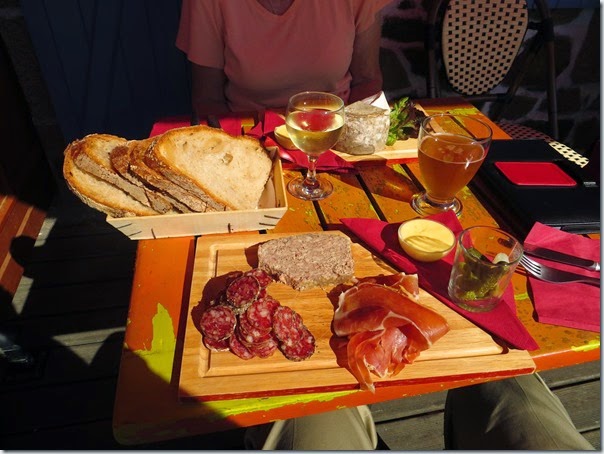 By the time we left, wine, cidre, bread, butter, pickles, cheese and meat, all gone. When we ordered we had no idea it would prove to be as great tasting as it was. Oh, and once again, they didn’t speak a word of English but since Linda had her trusty menu decoder book it didn’t matter because we recognized the names of several of the cheeses, comte and reblochon. When she asked about my meats I just chuckled and said, “Let’s just say there are likely some outards, innards and inbetweenards there.” Picky eaters we are not. I wonder why a person would even bother to come to Europe if they didn’t want to eat the foods of the country they were in. 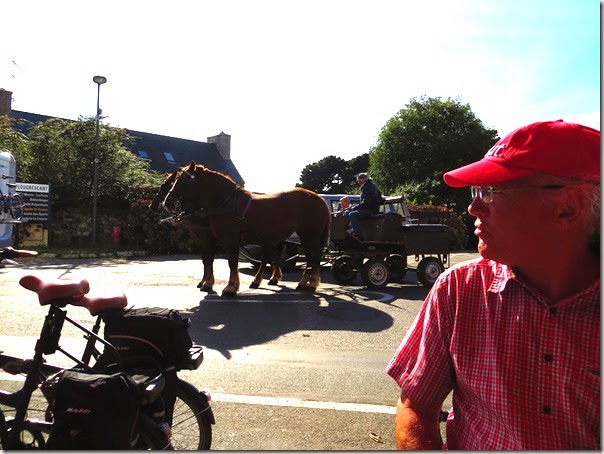 I did mention we were eating out in the country didn’t I? People arriving on bicycles and by horse and wagon. Yes indeed, we were definitely out in the country. No city cars roaring by with their exhaust fumes here, and looked at the right way, the fragrance of horse apples did add to the rural ambience. 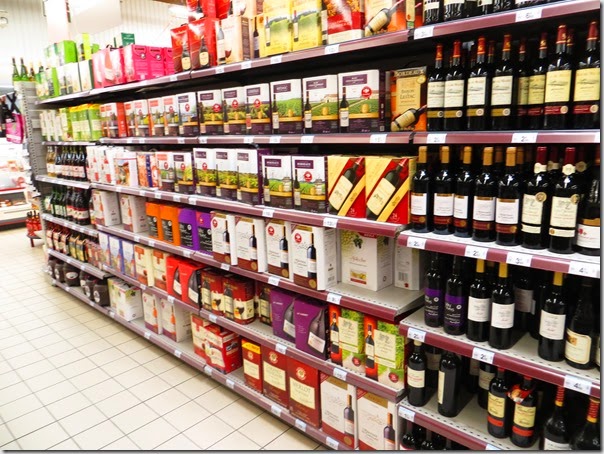 No, we didn’t buy any box wine. This is just to show that box wine can also be found on the shelves of stores in France though something tells me the quality of the wines in boxes over here greatly exceeds the box wine quality in the US. Bob and Linda, having more fun in Life than should be allowed.