Much More Than Just A Gite!!

Sorry, got a little behind in my posting. We are having way beyond far too much fun. 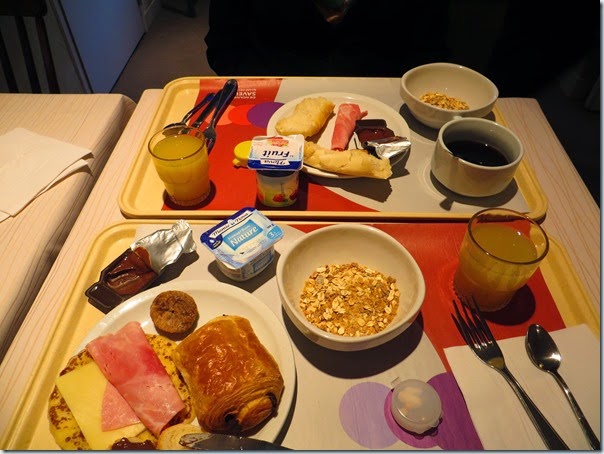 You could have fooled us. The hotel we were staying at in Rennes for the night turned out to have a very good breakfast this morning. We didn’t know it at the time but it served as an omen for the day. 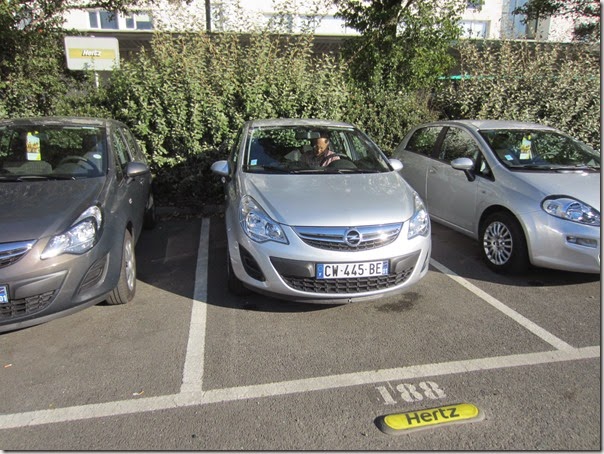 The first time we have ever rented a car in Europe. The rental process was easy but once we got to the car we ran into problems. However, it wasn’t driving it, it was getting out of the rental car lot. We couldn’t!! It turned out we needed a ticket to open the exit gate to the parking area and we had left it on the counter in the rental car office. Once we had it, it was smooth sailing out of the lot. 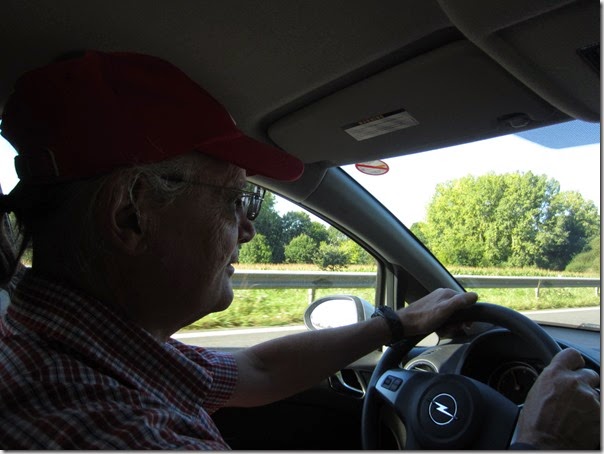 No sooner had I turned onto the street than Linda said, “The GPS has stopped working,” followed by ”and so has the Tab navigation program.” No place to pull over, cars behind me, it was simply drive on. About a minute later Linda says, “I’ve got the GPS working, it says turn left at the intersection.” That was a good idea except for the fact there was a big sign indicating no left turn at the intersection.

Linda really, really didn’t like it when I turned right instead of left. I heard, “Why didn’t you turn left like I said.” “Because there was a sign saying no left turn” “Well, if you aren’t going to turn like I say then I’ll just stop telling you where to turn.”

Despite that rather inauspicious start we did get out of town and on the road towards the coast without any further major problems. We named the Tom Tom GPS, Terrible Tommy  and the Tab navigator program, Never Navigated. Never Navigated is a rather brash British girl when she talks, but it appears she wasn’t the sharpest tack in the Tab app box. We can’t figure out exactly who Terrible Tommy is from his voice, and given how “intelligent” he is, he probably doesn’t know that himself.

Now when we travel the question is, do we trust one, or the other, neither or both? Maybe that is why we bought a paper map of the area. 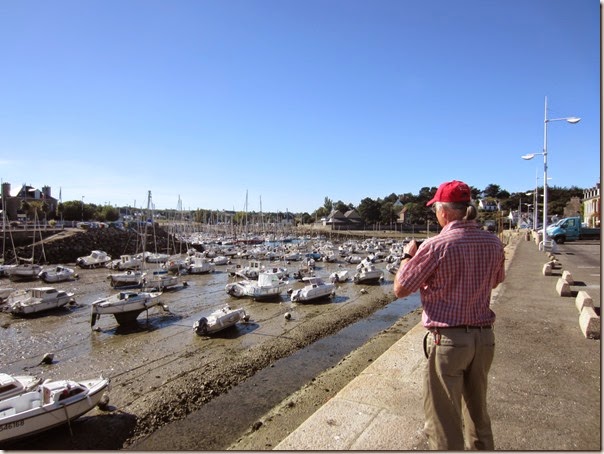 We were heading up the coast to find one of those special little towns to eat lunch, one with a marina and a restaurant overlooking it. We drove through several towns and looked at a number of restaurants, none of which might our criteria. Then we found it, a little town with a great little restaurant and a marina across the street. Just one problem though, someone had pulled the plug and drained all the water out of the marina. 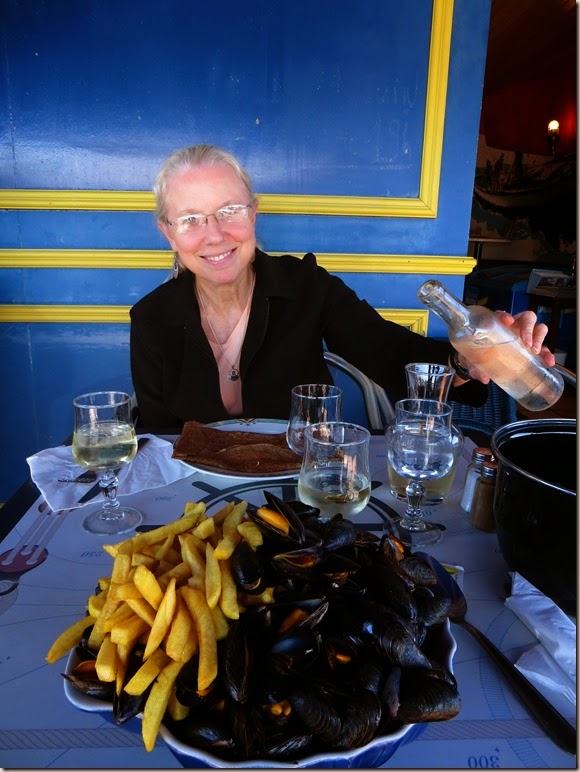 A galette for Linda and the biggest bowl of moules and frites I have ever had for me. We had ordered based on our trusty, look around and see what others are having method, and it didn’t let us down. 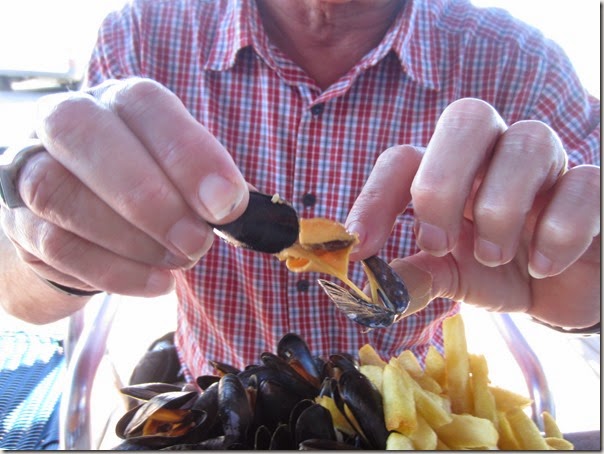 My technique for eating moules has greatly improved, I now just use an empty shell, squeezing it together to pick the meat out of a moule and pop it into my mouth. Still a little fumble fingered at times, but practice makes perfect. The amazing thing was that the amount of moules was so great I wasn’t sure I could eat them all, but in the end I was up to the task. Meanwhile over on Linda’s side of the table the best I could make out was an occasional, “This cream sauce is so good.” Less than 24 hours in Brittany and she is already madly in love with the region’s food. And to think, we have the next two weeks to enjoy it. 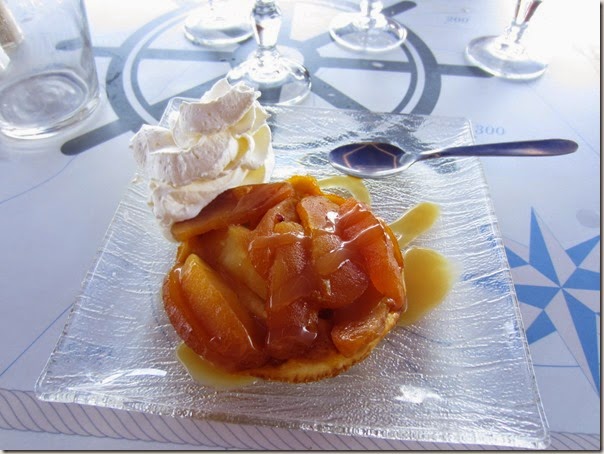 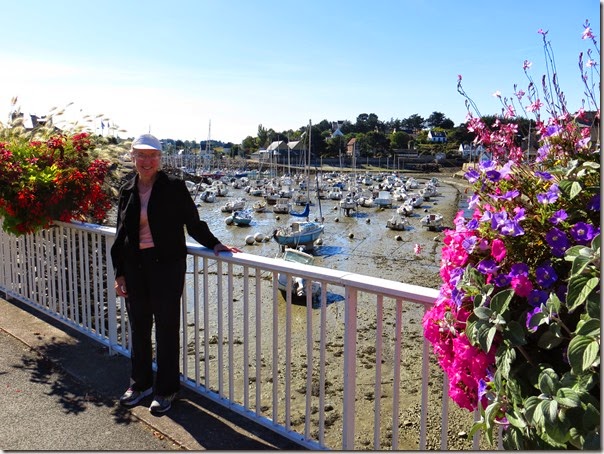 The little village was beautiful in more ways than one. 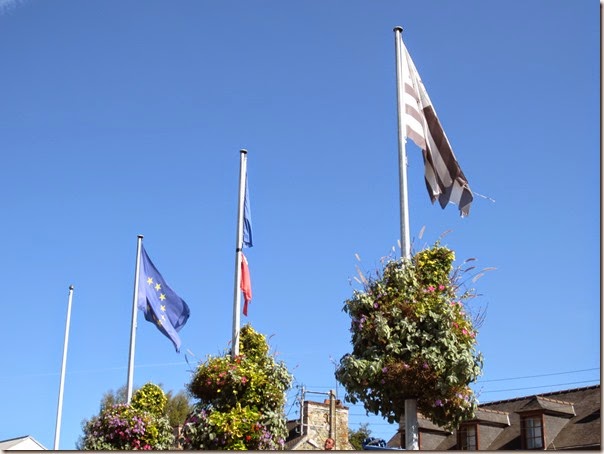 French flag with black band around the center of it to honor the French citizen recently beheaded in Algeria. We actually saw them wrapping the flag to the flagpole, but didn’t realize at the time what was happening. 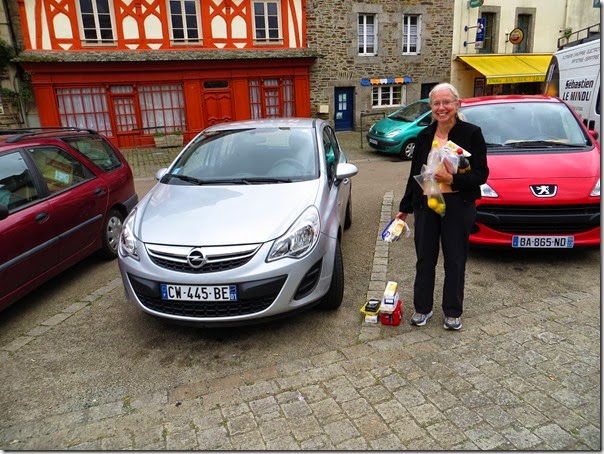 After arriving at our gite, we headed into town town check it out. The center of town turned out to be just a short distance away, but in the end we were very glad we drove. There is something missing in this photo and it’s not a food item. We were so excited after seeing the gite we went off shopping without our shopping bags. We know better than that, but we were so enthralled over how awesome our gite turned out to be that our minds weren’t fully functioning. At least we had enough hands and arms to carry it all back to the car. Maybe someday the US will catch up to the rest of the world when it comes to things like this. Until then we Americans will just have to learn how the more advanced countries of the world do things to preserve the planet when we travel in those countries. 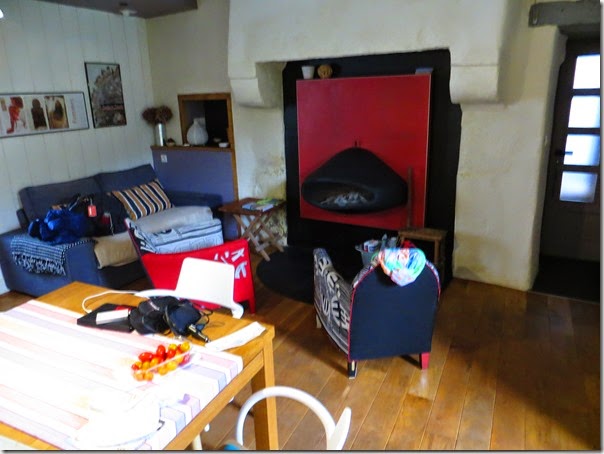 Living room of our gite. 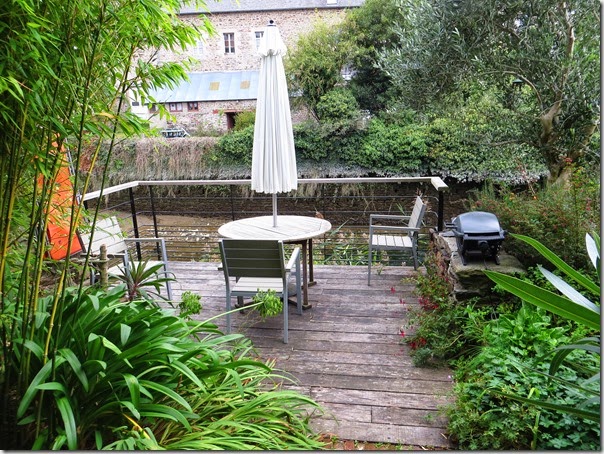 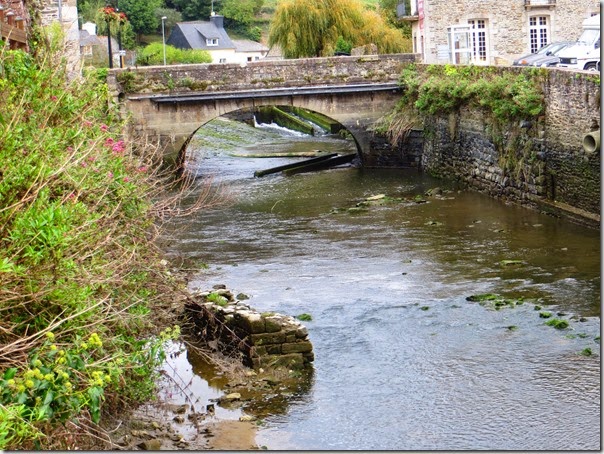 Looking upstream. It is a tidal river and at high tide the water reaches the top of the dark area on the stone wall. We estimated the distance between low and high tide to be 8 to 10 feet. 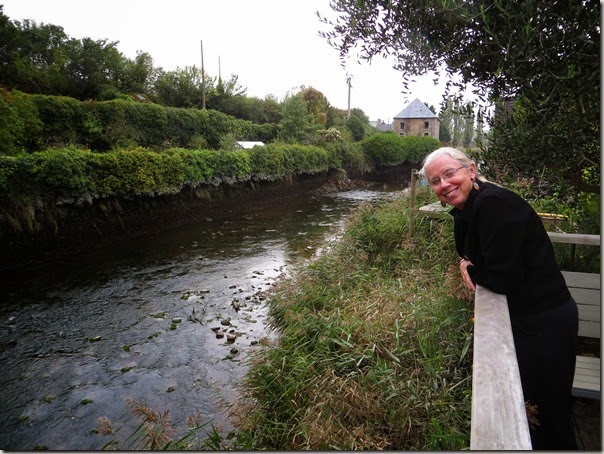 The smile says it all. This gite is way beyond our expectations. 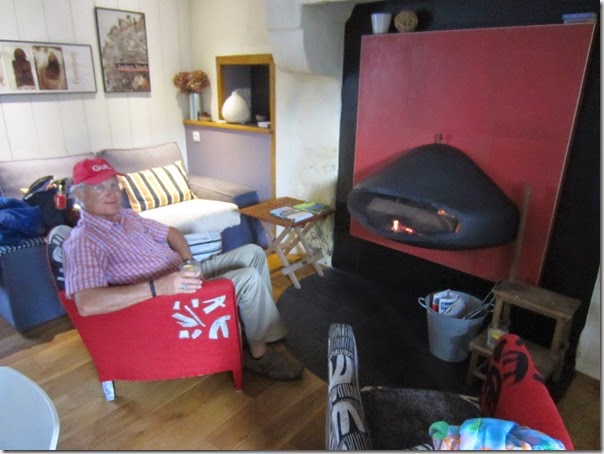 Relaxing in front of a fire in the fireplace. Linda said it best, “We spent hours and hours over a month’s time looking before we found this place, but in the end every hour was worth it.”

I don’t have a photo, since for some reason I couldn’t talk Linda into demonstrating how it works, but the shower is one of those electronic ones where the water temperature is instantaneously and automatically controlled. It has a rain nozzle in the ceiling, plus multicolored lights and music. That was a real surprise as we didn’t know it when we rented it. And the cost? 50 euros a night, that’s less than $70. And the parking is right at the front door on a little used side street, a short walk to the center of town. Add in the fact that Brittany is totally awesome and It just doesn’t get any better than this. What a way to begin wrapping up our three months in Europe.