A Day Seeking Dolmen Near the Coast 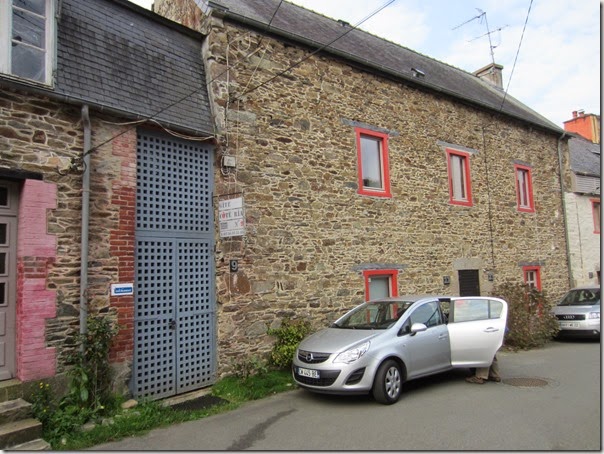 Getting ready to go off on another day of exploring. Our gite may not look like much from this side but once through that gray lattice door there is nothing but one WOW! after another. 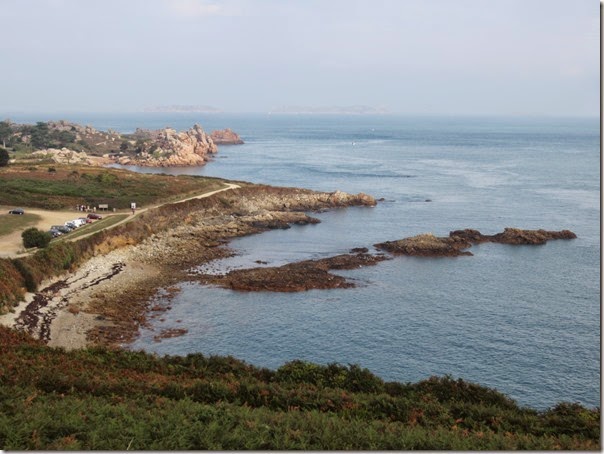 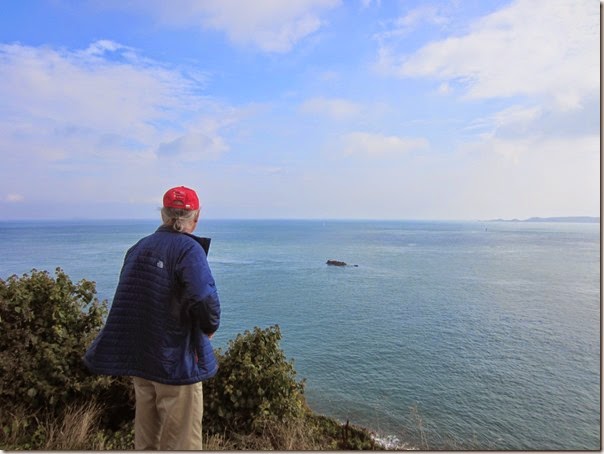 We could see a small island in the distance. Sharp eyed Linda said she could see something on it, but exactly what we couldn’t tell. 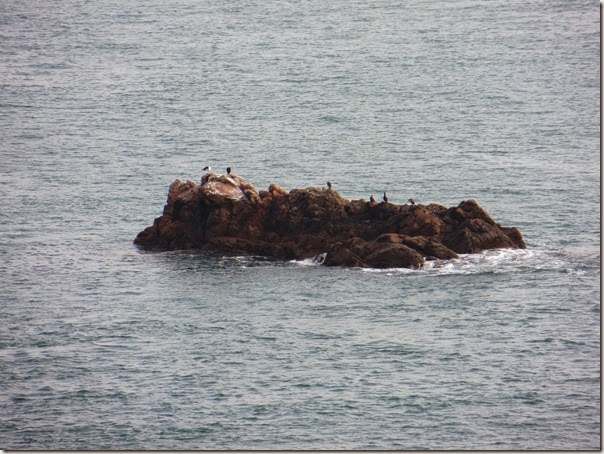 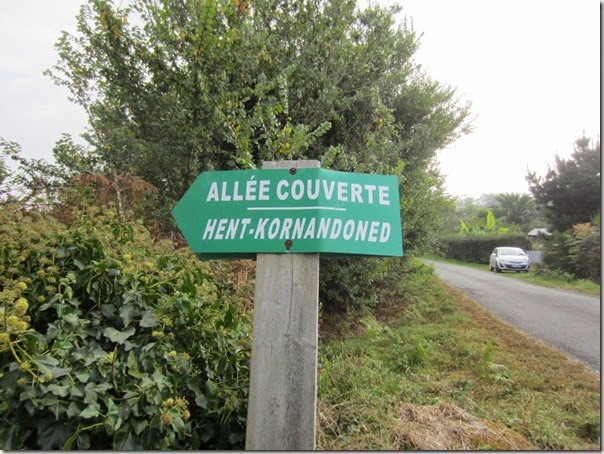 Not much of a sign and not so easy to find a place to park, but it didn’t matter, we were off to see our first dolmen. 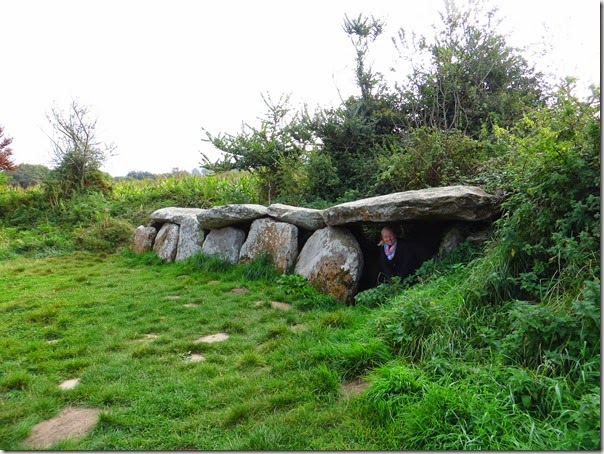 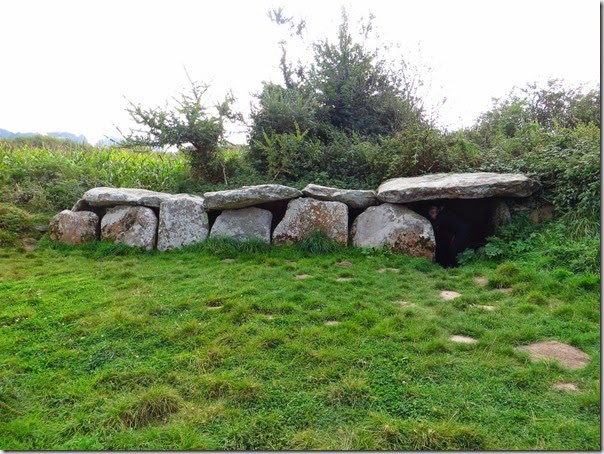 So, exactly what is a dolmen? It is a prehistoric burial chamber. 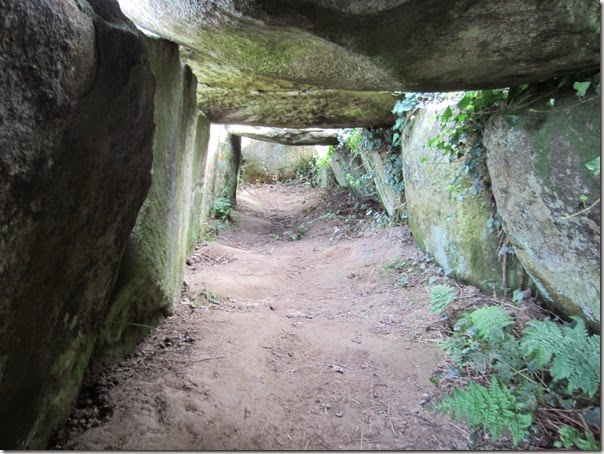 Large upturned flat stones form the sides, and even larger flat stones placed atop them form the roof. The size is such that by bending down, we could easily walk through them. I like to think of it as Linda being in “dead guy” heaven. As long as we were near one a huge smile never left her face, something about menhir being awesome but dolmen being beyond awesome. 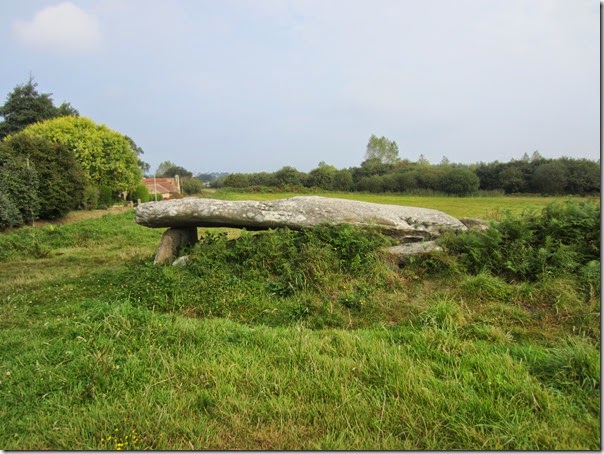 Across the field we could see what looked like a large rock, and as we neared it Linda, the family archeologist, paleontologist, and finder of “dead guys’, pointed out it was another dolmen. 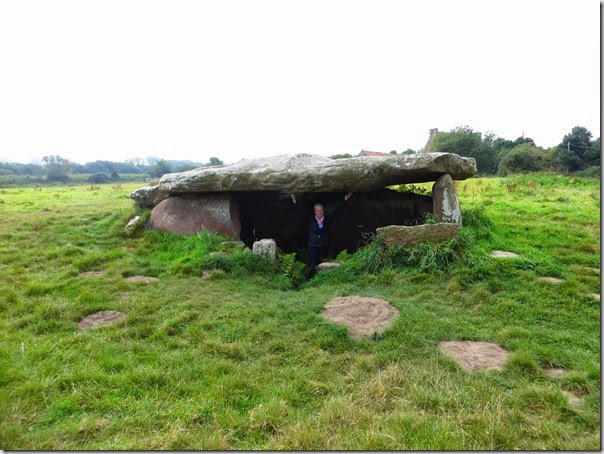 This one had actually served more than one purpose. 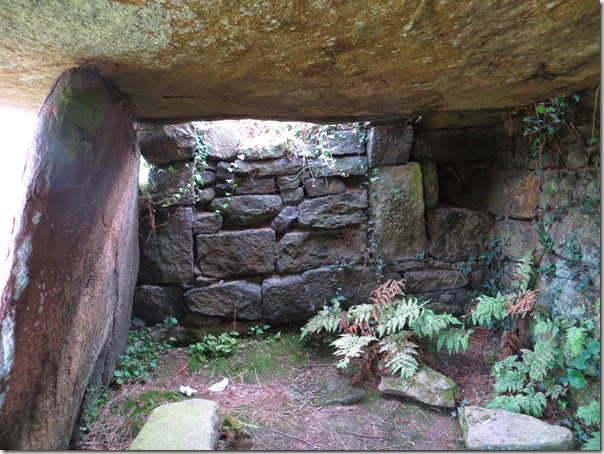 At some point in time it had been modified, becoming the house someone had lived in. Now I have to wonder if Linda will be searching for a dolmen gite to rent the next time we are in Brittany, and you can be most assured that we will be back again. One only has to be here a short time to fall in love with the area. 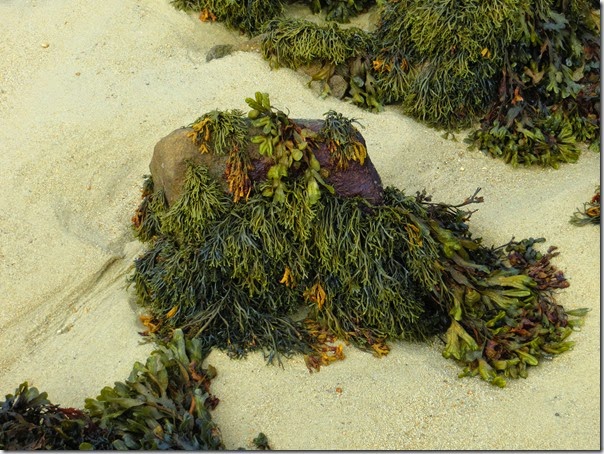 Then it was back to the shore, which actually isn’t hard since it seems to be a short distance away from wherever one is. 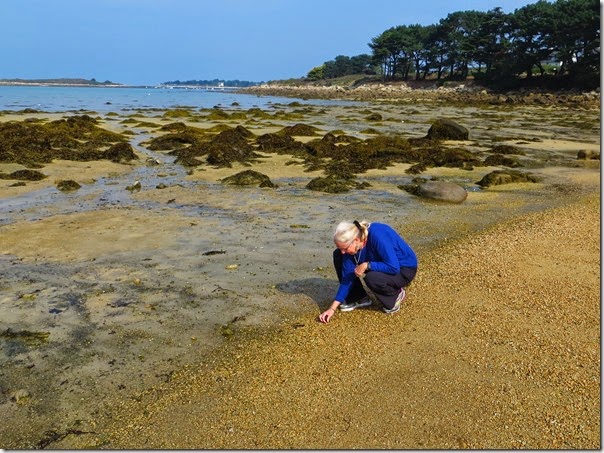 While I was busy taking photos of the interesting plants clinging to the rocks Linda was busy trying to remove all the shells that littered the beach. 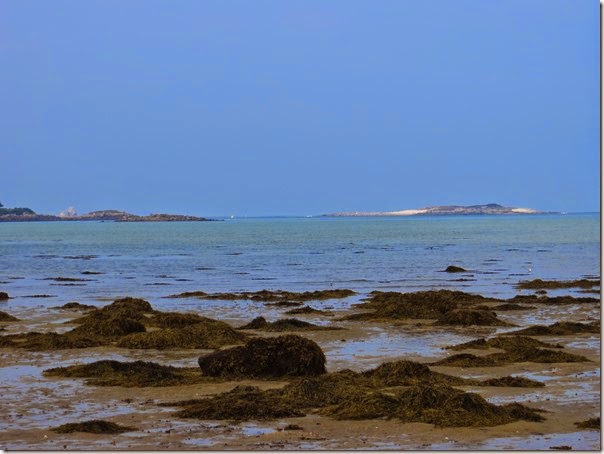 As I was to quickly learn, Linda had standards when it came to which shells she wanted and I just wasn’t capable of identifying them. Okay I thought, I’ll show her, if she didn’t want any help I wouldn’t give any help. Later she came up me and thanked me for leaving her alone. So much for me showing her. Rejected Bob. 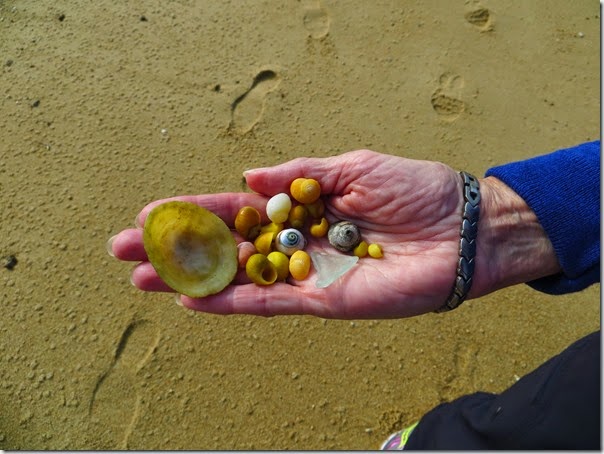 Looking at this photo I still have no clue as to what her beachcombing standards are. Maybe it’s A LOT, ALOT? (A Little Of This, A Little Of That) Baffled Bob. 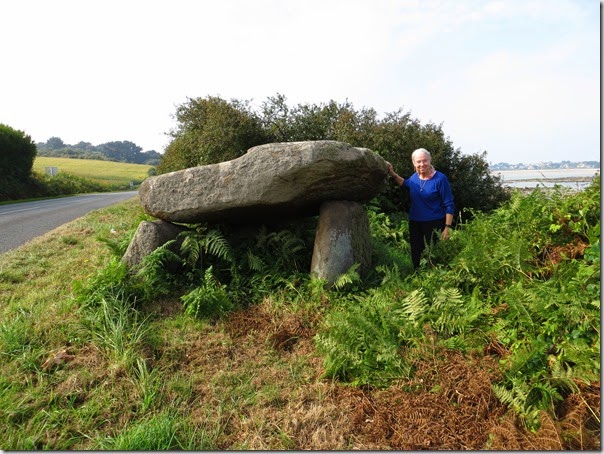 No sooner had we pulled out on the road from the beach parking lot than I had to pull off the road so she could look at another dolmen. This one was in bad shape as the area behind it had been partially eroded by the waves in the distant past so the back half had collapsed and was covered by vegetation. 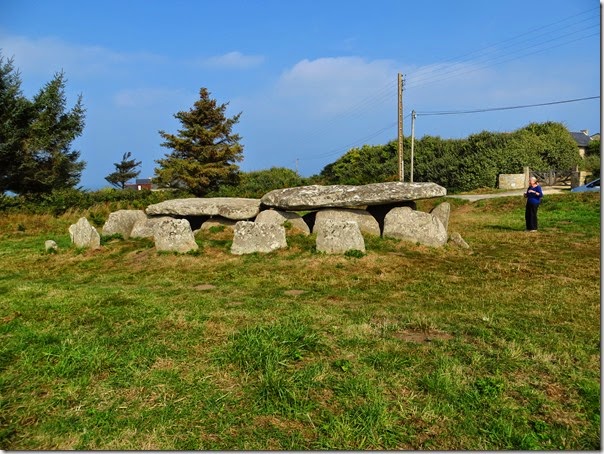 You thought that would be the end of the dolmen photos? You don’t know Linda. The key is in what makes this one different. Look at the size of the two stones forming the roof of this one. To some people a dolmen is just some stones. To Linda a dolmen is…., well I don’t know what it is to her exactly, but I do know excitement when I see it and does she ever get excited when she sees a dolmen. Think of it this way, I do the dolmen driving, she does the dolmen drooling. 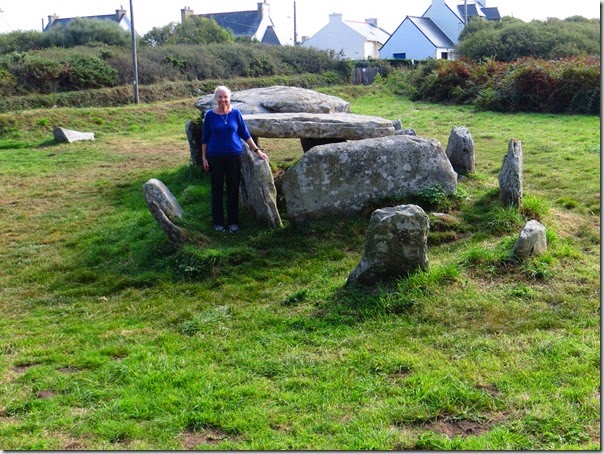 The small upright stones surrounding this dolmen were intriguing. we had to wonder what their purpose was. Could this have been a very important person? As Linda would say, what tales could this “dead guy” tell if he could tell tales. 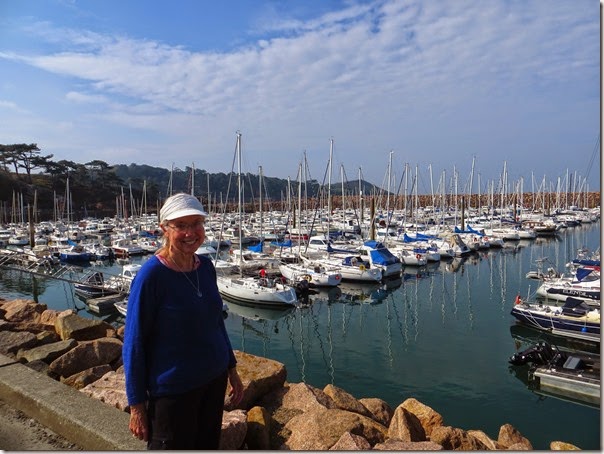 Another day, another harbor. This constant eating at the waterfront is getting almost boring. Almost, but not quite. The area we are in is simply awesome, no other way to describe it. 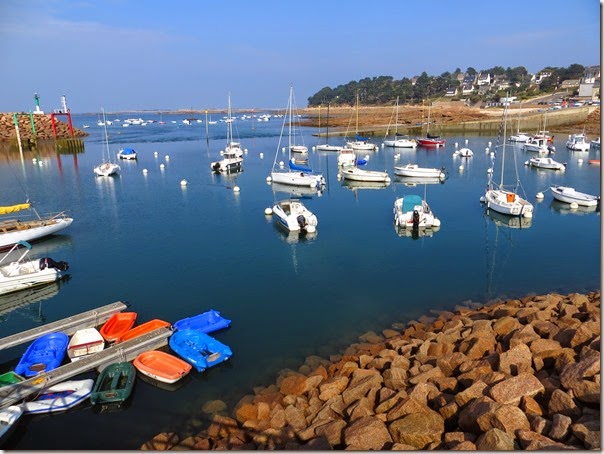 At least they found the plug for this harbor so the water hasn’t drained out. Actually we were a little earlier eating today and low tide is a little later with each passing day. Out of the photo to the right some of the boats were already resting on the bottom. 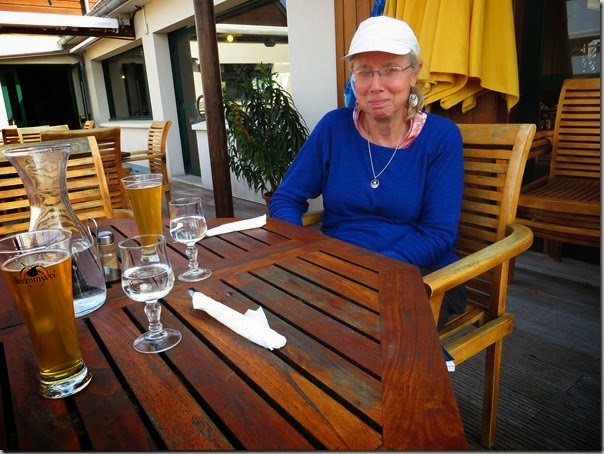 Linda letting me know what she thought of my ability to read French. I had pointed out what I thought was rose wine, which we ordered. Unfortunately it turned out to actually be the local beer. This was the before she tasted it photo. After the first teensy weensy sip, she took a larger one, then smiled and said, not bad at all. I had to agree. Sometimes we just luck out and this was one of those times. Relieved Bob. 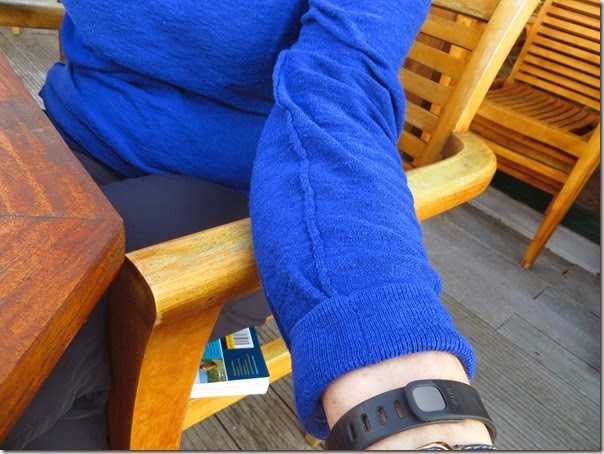 Recall the incident of the, would not open, washer lid? Well once it was open and she was removing our clean clothes, out came a blue sweater. A nice blue sweater that was just her size. The only thing she could think of was that the previous renters had inadvertently left it in the washer. Linda, being a person not to look a gift horse in the mouth, dutifully hung it up to dry, then decided to try it on. Fast forward and she wore it today. As we were waiting on our food she happened to notice a problem with it. She had put it on inside out. 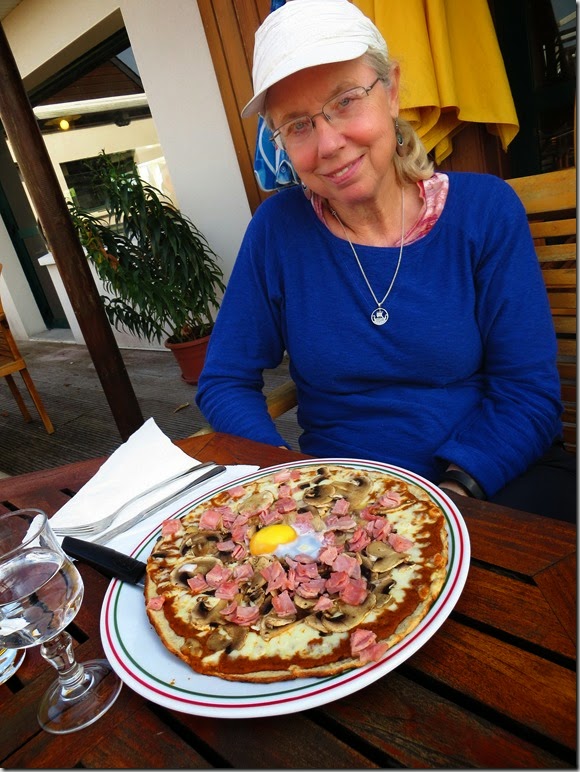 How she got back at me for ordering beer instead of wine. Egg yolk, I hate looking at egg yolks. As far as the pizzas we both had were concerned, they were perfect with a hard crust just the way we like them. Nothing like looking at what other people are eating before you order to help select the right dish. French, we don’t need to speak French, we’ve got Bob, which is why Linda has learned to always bring along her menu decoder. Bob, a great German guide, a complete idiot in France. 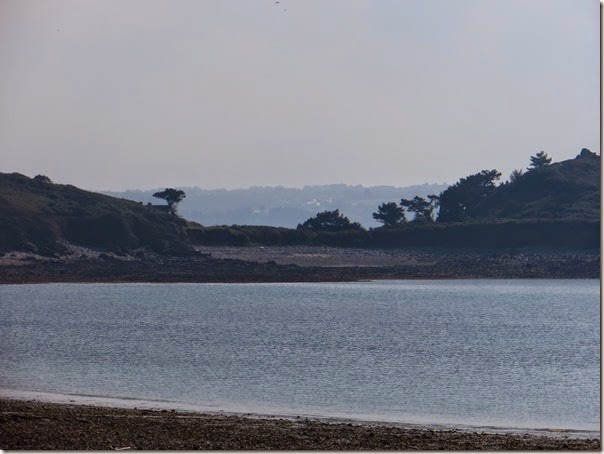 This area reminds us so much of Monterey. 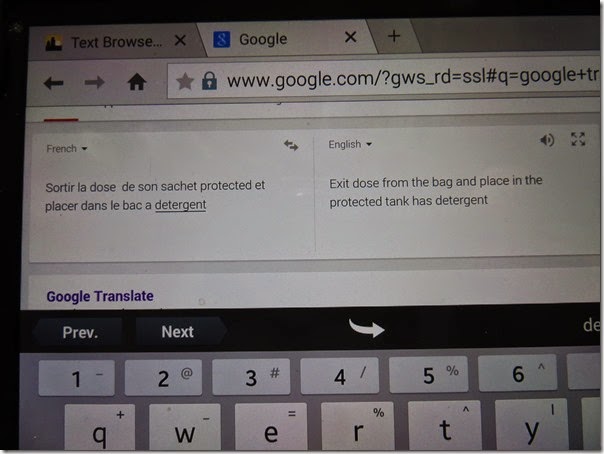 I’ve already written far too much today and have skipped so many dolmen we saw, but I can’t leave without this. Linda has been dutifully washing our dishes in the dishwasher exactly as the lady, who spoke very little English, told us to. She was very explicit that we were not to remove the wrapper from the cube of dishwasher detergent, and both Linda and I agreed that was what she said.

Everything on the box was in French, but Google Translate is our friend. Translating the translation, we learned we needed to remove the cube from its wrapper before placing it in the dishwasher. The joys of traveling in countries other than our own are never ending. Bob and Linda, having more fun with each passing day. Life is indeed awesome!!!