What day is it? 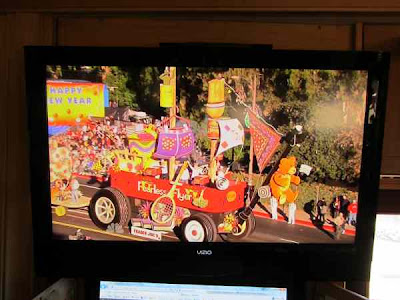 A little while later, "It says it's on today."
"Are you sure?"
"What's this?" she she says as I look up to a float on the screen. Obviously neither one of us was ready for 2012. 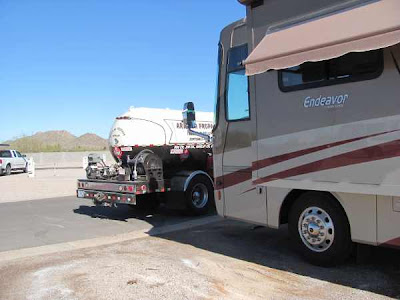 One thing about the driver of this truck, he'll never forget his encounter with Linda. The plan had been to fill the propane tank at the Pit Stop when we arrived in Quartzsite, and fill up with good filtered water at the same time. Then when Linda saw the propane truck driving through the park, she flagged it down. It only took 5.5 gallons to top the tank, less than the driver said they stop for. That was after he had "filled" the tank, but before he was to discover that Linda is not a grizzly to be triffled with. I wasn't present for the, he said, she said, but I have to believe what happened was as Linda told me. That once "she" got through with her last she said, he never said another thing, most likely from the shock of what she said, what ever it was that she said. 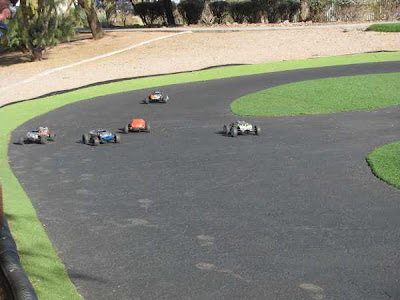 In the afternoon I walked up to the RC track by swimming pool where they race radio controlled electric powered cars everyday day at 2 o'clock. They race Traxxas Rustlers, 1/10 scale models which are 18 inches long, 12 inches wide and can reach speeds of 70 mph. 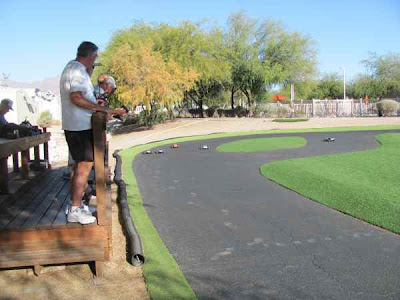 Here's the best part, the drivers are all old guys who are 12 years old. The cars are tough, and there were crashes galore as well as some really exciting multi-lap racing with even some side by side action. There were six races, but given the need to repair or replace, I don't think there was a single race when all six raced. I watched the action for almost an hour before I headed back to the coach where I needed to do some more waxing of the Explorer. 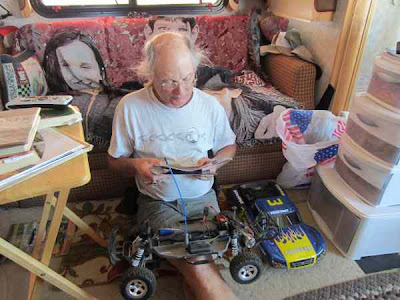 So much for waxing the Explorer, it was time to spend some time with my Traxxas Slash. The Slash is the slow big brother to those racers, some two feet long, one foot wide, and with my stock motor, getting up to 30 mph with a strong tailwind. That's the difference between the Rustler built for paved track racing, and the Slash which is built for serious off road racing. It really doesn't matter how fast it is, it's all about how much fun you have with it. That's one thing that getting old will do to you. Then again, if Life isn't fun you aren't really living.