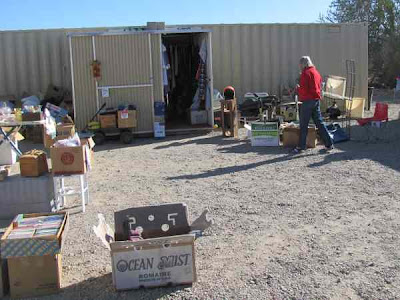 Another of the our Quartzsite traditions was on today's schedule, our donation drop at the Salvation Army Thrift Store. We did have a bit of a problem finding the store, as they had to move after losing their lease. The new building is nearly ready, but for the time being they are operating out of storage containers and outside displays, with a trailer also in the mix. I guess the good news was that they were excited about how nice the items we dropped off were, and I was thankful that because of their sparse inventory, Linda was unable to find anything to buy, meaning that for once we donated more than we bought. 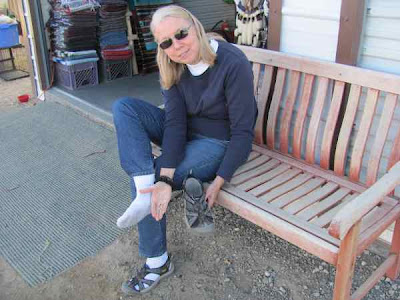 Next we drove up to the Main Event, where Linda did an excellent job of picking up numerous stray boulders from the gravel and depositing them in her sandals. I know that the term boulder can mean different things to different people, but Linda assured me that the degree of pain inflicted by the object in her hand means that was most definitely a boulder. Bob just smiled and took the photo. Good Bob. 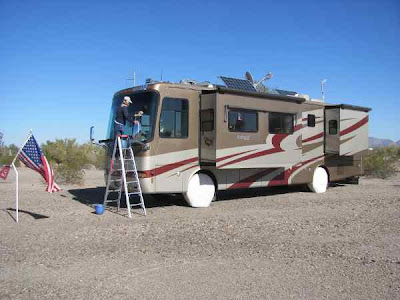 Back at the coach Linda claimed to be tired of doing nothing and set about washing the coach windows. This engendered some head scratching on my part as I recalled all the driving around I had done this morning looking for the Salvation Army store that had moved. Then there was the couple of hours shopping in the Main Event area. I was also puzzled as to why I had to get out the ladder and set it up, as well do do a couple of other things if she was one who was tired of doing nothing. Especially since I was tired from all the doing somethings that we had been doing up to this time today. At least I was smart enough not to make comments on the quality of washing the washer woman was doing. And that was very good, Good Bob. 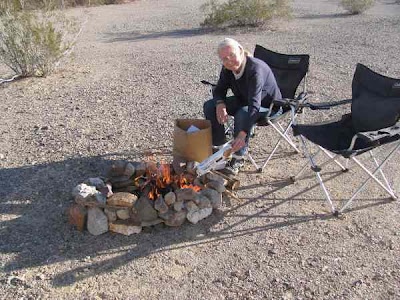 As you can tell, someone was not very happy about having their photo taken. There was something about flames, heat and smoke, the exact quotes not being suitable for publication in a journal of this nature. The reason for the fire was it was looking very much like we would be moving to La Posa South tonight, where the Monaco group of the IRV2 forum was gathering. What you say does that have to do with this fire? Well after building that fire ring then moving it the first day in Quartzsite, we had never built a fire in it. So before we moved, it was going to get used. Pyro-mom had a great time burning all the paper she had collected during the past week, though you'd never know it from the look she was giving me.

In the end we did move just before it got dark, meeting everyone, then getting set up. It is always interesting when you meet people you only know from their forum names, and I had fun proving that there was really a reason for my BaldOldBob screen name. Later back in the coach Linda remarked several times what a great group this was and it looked like we were going to have a really neat time. We had been looking forward to this and having a great time, and that was exactly what was happening. Funny about that isn't? Expect something nice and that is almost always what happens. Expect something bad and that is almost always what happens. Life spelled life, or Life, it's up to us.

Email ThisBlogThis!Share to TwitterShare to FacebookShare to Pinterest
Labels: Quartzsite