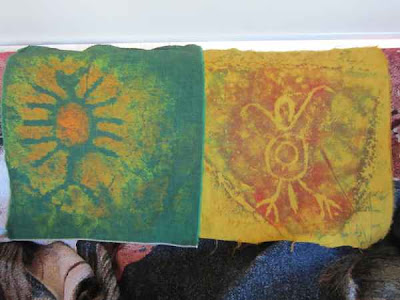 I was remiss in not posting a photo of the petroglyph painting rubbings we bought yesterday, though the fact we didn't take any photos until this morning probably had a lot to do with it. We love the two images, but as to what they are, who knows for sure, but they should definitely be conversation pieces. They are from the Pacific Northwest and the actual petroglyphs are now covered by the waters backed up from a dam. 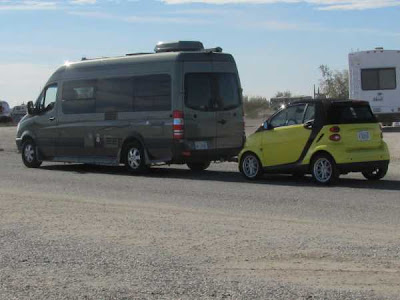 In Quartzsite RV's come in all shapes and sizes, as this setup shows. The plates on the Super B were "DA HIVE" and the plates on the Smart car were "A BZZY B". Who says RVers don't have a great sense of humor? Now if I can just get a photo of the huge tandem axle semi truck that pulls the tiny little 5th wheel, the picture will be complete. 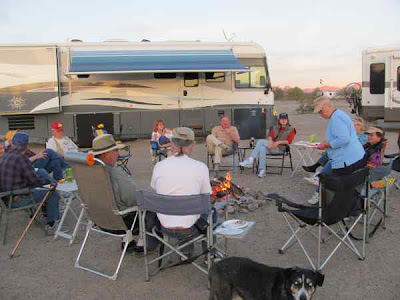 Most of our day was taken up with visiting. In the early afternoon we attended the Datastorm users get together, where 90% of what was said went over my head and I didn't hear the other 10%. Still we got to put some faces to names and also learned that our troubles with the equipment are actually minor in comparison to what many others experience.

Later we got to spend a few hours with old friends and new ones around the RV America campfire where we enjoyed the snacks and conversation as we caught up on each others travels over the past year. I also have to say that for just plan simple snacks, the variety of foods sure couldn't be beat. What is there about eating, talking and laughing around a campfire as the sun sets over the mountains in the desert west? I really can't explain it, but I can feel sorry for those who have never had the experience. They really don't know what they are missing.

Speaking of missing, our friends George and Kelli have already left Quartzsite, not because they wanted to, but because they had to. No, they didn't act like Real Texans and get kicked out of the Bluebird group gathering. When they went to turn on their generator the other morning, it made noises that even a mother couldn't love. It appears they have a bad bearing, or maybe a really, really bad bearing, though the end result was the same. Which was no generator, so no power, and that meant they were off to the Bullhead City area, first to rest a few days and then to tackle that little problem. Always keep in mind that the only RVers who never have a problem are the RVers who never use their RV. Which would you rather be?