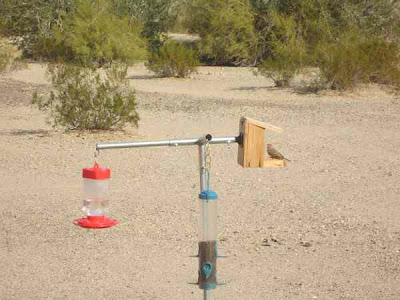 Slowly but surely the birds are finding the feeders. I can tell because usually I hear, "Bob, Bob, Look, there's a bird at the feeder." Now if I walk past the window, look out, see a bird, and say something to Linda about it, all I hear is "Yes, and there are a couple more in the bushes", or something like that. Interesting how quickly the unusual becomes the common place. 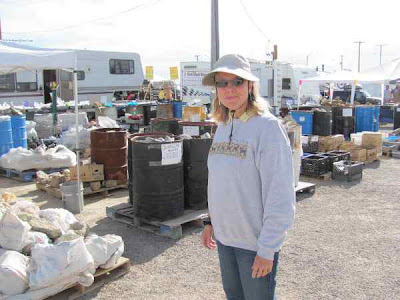 Today's outing was filled with rocks, but as you can tell from the look on Linda's face, she wasn't happy with not being able to make any significant purchases. Then in the middle of rock shopping our son called and during the conversation let slip that he really like Tiger Eye. I didn't recall seeing any Tiger Eye up to this time and neither did Linda, but as you might guess, from then on all we could see was Tiger Eye. What is in the mind the eye sees. No, that's not it, it's what the eye sees that the mind sometimes recognizes. 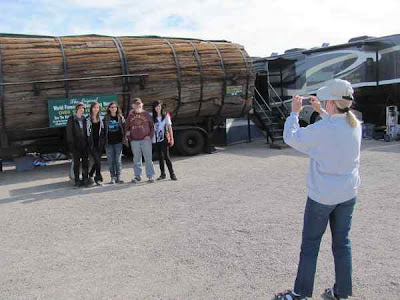 Linda doing her good deed. The young lady to the right was getting ready to take a photo of the other four people when Linda volunteered to take the picture. I couldn't pass up the opportunity to take a picture of Linda taking a picture. What makes it really special is that it shows that Linda just doesn't say she tries to do a special kindness for someone every day, she actually goes out and does it. Lucky Bob. 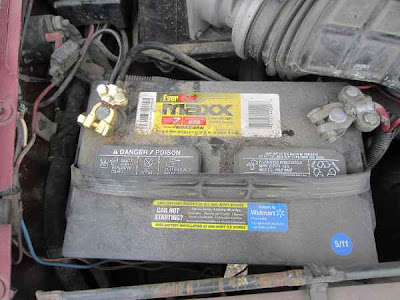 A small repair that hopefully will fix the occasional starting problem. It's the old, if you don't know what the problem is, just throw some parts at it and maybe it will be fixed. If nothing else, the new clamp sure does look pretty. Hint, if you don't like dust Quartzsite is definitely not the place for you. 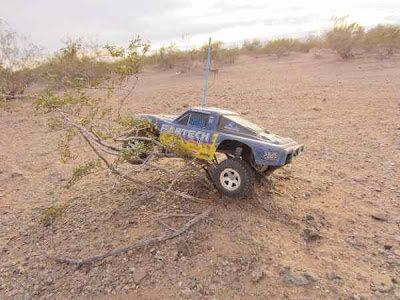 Linda just had to take this photo and then made me promise to post it, all the time laughing so hard I could barely understand what she was saying. It seems like her driving this afternoon consisted of careening from rock to shrub with the resulting being I had to walk out to the car a number of times and untangled it. This of course was accompanied by various comments about women drivers.

I should have guessed my time would come because eventually I found myself in the same situation after having turned a corner in what was really a straightaway. As I walked over to retrieve the car, I heard "Wait, wait." I guess she was just waiting for the right opportunity to get back at me, and it serves me right. Bad Bob. No more comments about Linda's RC car driving. 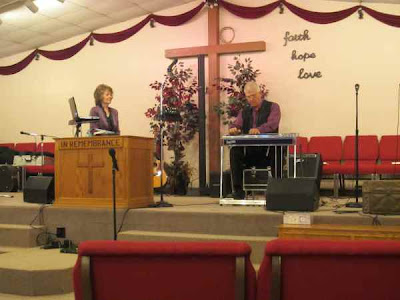 In the evening we went to a Camp Meeting at the First Assembly of God Church in Quartzsite. It was our first ever Camp Meeting, as well as our first time in an Assembly of God church. I'll say we now have a better understanding of what the term "Evangelical Christian" means. Ron and Opal, a husband and wife country gospel duo performed, and the preacher keep saying he wasn't preaching. But as much as I adjusted my hearing aids, it sure seemed to me like he was preaching. I think Linda summed the experience up best when she said that Ron just didn't seem sincere. That while he talked the talk in terms of the words and songs, unfortunately he looked like an entertainer and acted like an entertainer and so came across as an entertainer who was doing something he had done hundreds of times before. Still, we got to experience something new in Life, plus listening to Opal was uplifting.