The door to our next adventure opens, maybe 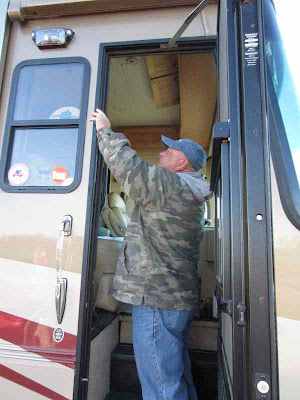 This morning, Mike, who also goes by Mr. Fixit, was back working on the door that Linda just can't seem to open. I admit I can't fix it, but then since I can open it, it isn't really necessary. Linda, sporting three broken nails and threatening to break something of mine and she's not talking about nails, thought it should be fixed. For all his work, and he tried almost everything under the sun, he never could solve the problem.

By the end, quite a group had gathered around the door that didn't open at least for Linda, and they were offering all sorts of advice. The consensus was that I should take a Dremel tool to a bit of metal extending from the door frame, and that would fix it. We shall see, we shall see. For his trouble, Linda presented Mike with a big bowl of smoked trout spread and the last of our crackers. I could only shake my head in wonder, thinking it had been me working on the door instead of Mike my reward would have more likely been a crack alongside the head, along with her eating all the smoked trout as I sure wouldn't have deserve any. Smart Bob for letting Mike try to fix the door. At least we still have half of the trout to eat, Linda is mad at me, and besides, stores have crackers. 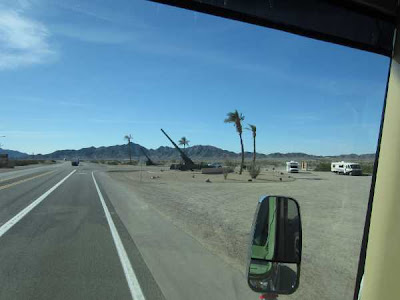 It was about 60 miles south of Quartzsite to the turnoff to Imperial Dam Road. We were behind four other RV's as we approached it, and I could see Linda leaning to the side and hear her talking to herself.
"We've got to be close."
"I can't see the guns yet."
"There's one of the guns."
"There's the other gun, it's just ahead."
"You're going way too fast, slow down, SLOW DOWN!"
As you might know, it's hard to slow down much slower when you're only going 10 mph and you haven't even reached the turn lane yet, but I did as told, and we eventually reached the corner so I could turn at what was deemed a safe speed. 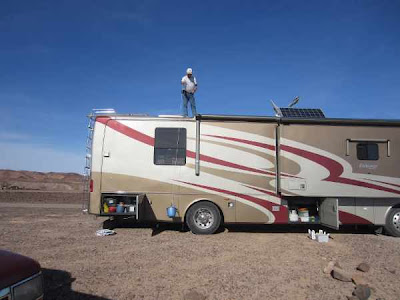 We were lucky in finding a site along one of the fingers overlooking the lake that someone had apparently just pulled out of. There is another RV between us and the lake, but we are quite a distance from any other RV's and as Linda says, it is quiet and peaceful and warm. Actually it was downright hot, but first I needed to raise the solar panels. One handle didn't want to come loose, but using a bucket to lift my tools, it wasn't long before all three panels tilted towards the sun and our batteries were being recharged. 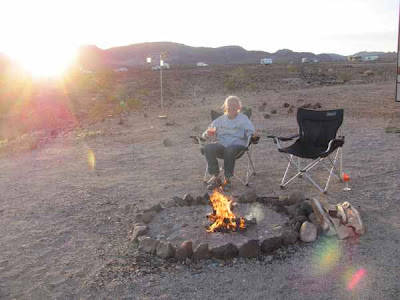 Why we love Senator Wash at Imperial Dam. I see the sun setting behind the mountains, a cozy fire, a strawberry margarita and the beautiful blond that is my wife with a huge smile of contentment on her face. Life really doesn't get better than this. I had to laugh at the little fire until Linda explained her reasoning. We only have so much firewood and she is going to have a fire every night we are here, so she is rationing it out to make it last, with bigger fires towards the end of the week. Smart woman. Smart Bob. Great Life. Now if I could only figure out how to fix that door it would be The Perfect Life.