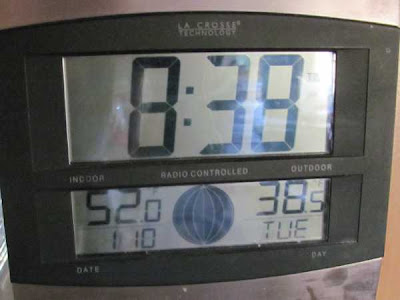 Early morning in Quartzsite is much later than what I usually call early morning. I don't know what it is, but when we are out in this desert air, my usual early morning rise and shine hasn't only got up and went, it has completely disappeared. It probably has something to do with the inside temperature as indicated by the photo, along with the warm creature next to me in bed. Heat through absorption, not chill through arising is my morning motto when at Quartzsite and from the sounds occasionally coming from beside me I think Linda enjoys it too. 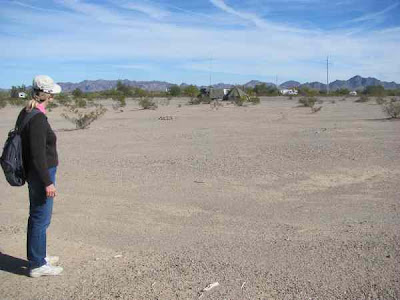 While Quartzsite isn't exact OZ, though it might be close, somewhere over there is the rainbow, or least the pot of gold at the end of the rainbow. The problem is that we wouldn't know it if we saw it, though the looking sure is fun. We did have a purchase in mind as we headed out, those 5 amp fuses for our sometimes Notcold Norcold control board that I have yet to replace. Like Linda says, "It isn't cold enough for it to go out, so why replace something that is working." Hope she applies that same thinking to me. 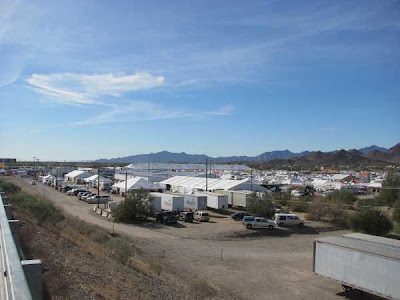 We did have one thing that Linda had decreed would be first on our agenda, walking over the I-10 bridge then up to the QIA to buy our tickets for the New Christy Minstrels concert. We go to the afternoon performance, and we got tickets in the 150's, which means there were just over 150 tickets already sold. Once that purchase was completed, we walked over to the post office area to check out the vendors, then headed back across the bridge to KB Tools. 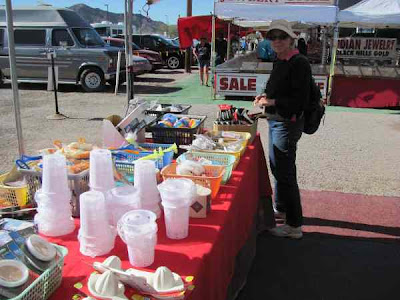 There are a number of vendors already set up, but there are also many empty spaces waiting for next week's major influx. We do have our special places where we always shop, the kitchen store being one of them. As we walked away without making a single purchase I remarked, "I can't believe you couldn't find a single thing to buy." To which she immediately replied, "Neither do I." What's not to like about a woman with an outlook like that. 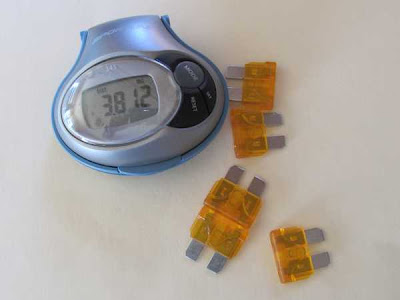 Back at the coach we reviewed the results of our excursion, two concert tickets and what you see. That's five fuses which cost a grand total of $1, and 3.812 miles of walking. To say we were tired would be correct, and to say that we decided not to go back again in the late afternoon would also be correct. I guess it was a case of our need for exercise and shopping both being sated, plus any bargains that we didn't find today will still be where we can't find them tomorrow. 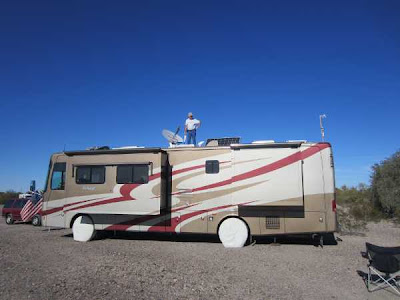 Another of those little jobs that makes Life at Quartzsite better, tilting the solar panels to increase their efficiency. Of course it wasn't without a small glitch, that being the panel I had moved when we had the Winegard installed being partly shaded by the MotoSat. For now we are leave it where it is, but if we don't generate as many amps as we need, I'll have to figure out some way to reposition it. Time will tell. 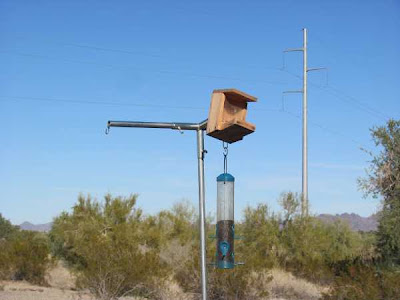 We also set up the bird feeder. We both agreed that Linda's mounting of the feeder our grandson Zachary made for us was a little off kilter. But maybe that is the real key to enjoying the Quartzsite experience, you have to be a little off kilter. That's not to take anything away from the people who have to have everything in its place and their RV immaculate, but to us part of being at Quartzsite is the dust and dirt. The being tired from too much walking. The hum of generators in the evening. The birds gathering around the feeder. The fantastic sunsets. As always, it's a case of those that say they couldn't do it being absolutely right.