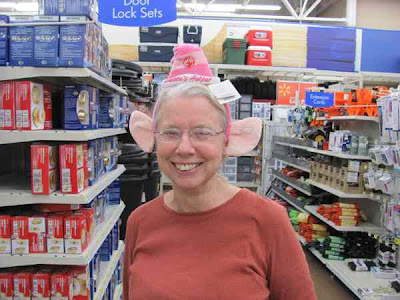 No, we were not celebrating New Years Eve, it is just a normal early morning shopping trip to WalMart. Walking down one of the aisles in the hardware section Linda noticed these ears laying on a shelf and just had to put them on. It was only as I was posting this photo I noticed the sign above her head. To think, there was a time in history when an individual exhibiting this weird behavior would have been locked up for sure. Just thinking out loud here, but maybe that wasn't such a bad idea. 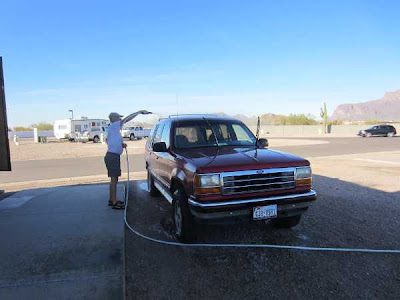 I call this preventive maintenance. I probably washed the Explorer at least once during the course of the year, but if I hadn't, and I know Linda would know whether or not I had. The result being if I hadn't, I'd never hear the end of how I hadn't washed the Explorer even once in all of 2011. This was making sure it didn't happen, and an additional benefit was that the Explorer looked very nice afterwards. Good Bob. Smart Bob. 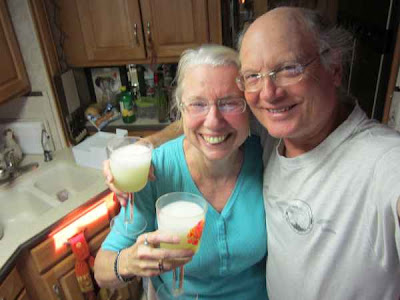 This isn't what it might appear to be. Actually it is the only margarita we had along with a plate of guacamole for New Years Eve, not the third or fourth as our demeanor might suggest. The big smiles come from what had transpired during the preceding minute or so. It began with the fact that I hadn't made margarita's for a long time, so I wasn't sure how they would turn out, then Linda took her her first sip.

Next thing I know she is grabbing me and saying "Come here, come here" while pulling me right up next to her. I hadn't shaved since the morning, plus I'd forgot to put on after shave, and I sure hadn't put any magic love drops in her margarita, so just exactly what was going on here? It turned out she merely wanted a photo of us celebrating New Years Eve, even if it was only 7:15. So much for any of those thoughts caroming around inside my one track mind.

The smiles are a result of what happened next. It seemed Linda wanted the photo to include our Margarita's, so she raised her camera up high and took a photo, which turned out to be just of our heads. More photo's and more photos followed, and no matter where she held the camera, those margarita's just would not show up in the resulting photo. Finally she got to laughing so hard at herself, I took the camera and with one click, got the photo she wanted. And now you know the rest of the story.

It was 10 o'clock here when we watched the New Year celebration in New York City, and soon after that it was time for us old people to call it a year. Sure we have resolutions that will no doubt be broken, but one thing we absolutely know: Life is not a dress rehearsal. Don't be afraid to laugh, love and retire early.