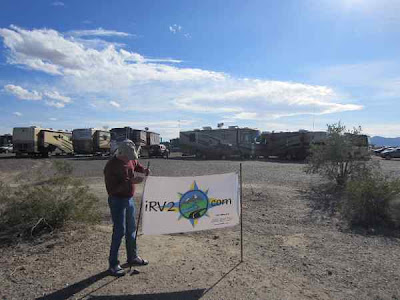 Except for our usual long morning walk we never left the IRV2 circle of motohomes today, which is a first since our arrival in Quartzsite. The Big Tent RV Show started today and for the first time ever we weren't one of the early attendees. Those that did go to the show said it was more like four or five years ago with the aisles were completely jammed. That is good for the exhibitors and also good for us. Hopefully the crowds will have thinned out in a couple of days when it is our turn to attend.

The other thing that happened today was the wind, and with the wind was the normal Quartzsite dust. Our wind gauge was showing gusts of 36 mph, which meant dust everywhere. Even the sign marking our group site was suffering, losing a bungie cord and threatening to fly away. It was also the afternoon of the pot luck meal, and we watched as the wind upset lawn chair after lawn chair, and it looked like it might be more a little interesting come pot luck time if the winds didn't quiet down. 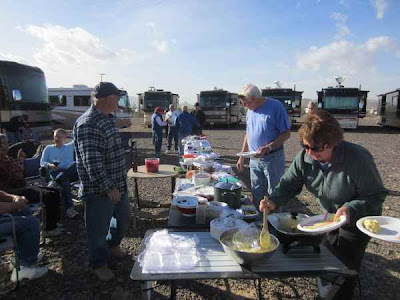 While I can't say that Monaco made RV's are the best on the road, I can say that that the IRV2 Monaco Owners forum members karma is far beyond great, as the winds died down at the 3 o'clock hour of the potluck lineup. All resolutions on my part for forsaking foods deemed not natural immediately went out the window as I gazed at the displayed dishes of decidedly delightful delectables. 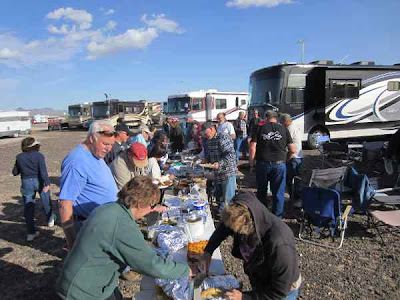 I really can't single out any one dish as being better than another, not to hurt anyone's feelings, but simply because they were all that good. It bought back thoughts of days gone by in our former life of those many church covered dish dinners. There must, however, be mention of the Danish meatballs and Danish rye bread brought by the Danes Are Coming, who are from, you guessed it, Denmark. Doesn't matter where RVers are from, we are all the same. Unless you're from Victoria, Texas that is, but there is always an exception to any rule. 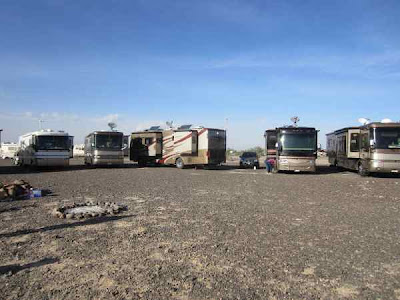 A very small part of our circle of rigs. If Linda remembers to take a photo of another section of the circle tomorrow, I'll show more. At last count we had 18 rigs, which is not large by Quartzsite standards, but makes far more people and names than one can easily remember. It was near dusk when the wind returned with a vengeance, over turning chairs and sending everyone scurrying to the safe confines of their coach. It had been a very good day indeed with new friendships made, and great food consumed.

The highlight of my day, and it shows just what a boring Life I live, was when Ed Christensen helped me... major correction, when Ed Christensen, edchris942 on the forum, took the thermal fuse off of the leads on the bay heater, and said just take it into Radio Shack and use regular squeeze connectors to fasten it back in. That in itself was worth every penny we spent in moving down here to be with the IRV2 Monaco group. Kindred souls and coach owners helping each other. Living Life as it was meant to be lived.