Out and about La Posa South 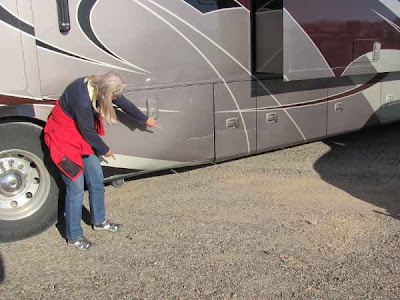 Linda pointing out one of the big problems you will encounter while at Quartzsite. And no, it's not that you will run into something and damage your RV like this. It's the little old men that drive the thousands of RV's you will see at Quartzsite. You have to watch out for them little old guys just so they don't run into you just as they ran into a rock, post or tree somewhere else in their travels. They get behind the wheel and think they are King of the Road, when they can't even drive the thing without running into something. No doubt the owner of this Tiffin was bragging to his wife about what a great driver he was when he tore up the side of coach. 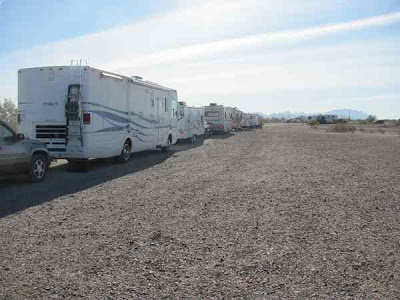 The early morning line at the dump station. Four LTVA's in this area, thousands of RV's parked all over the desert and only two vehicles can dump at a time. That is why you see the pumpout trucks cruising through the area with names such as, Yesterday's Meals on Wheels, which is my favorite. We did dump and fill with water in the afternoon which wasn't without a bit of discussion when someone tried to cut in front of me in line. I think the big words I used, ones with more than four letters and more than one syllable, may have confused him, because after few back and forths he went back to the end of the line. Of course the fellow that keeps watch over things like this was over at the water fill area at the time, but all ended well. At least it was no high falutin' Tiffin driver acting like he was King of the World. Of course he would most likely have run into the posts at the dump station if that had been the case. 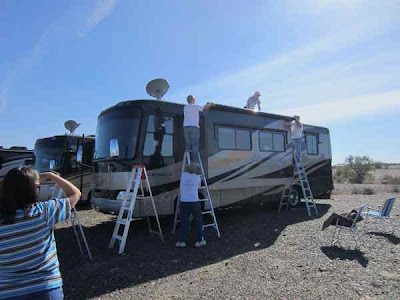 I'd mentioned before that this group of people like to fix things while they are here, and it wasn't long before the ladders were up and slideout toppers were being replaced on a coach. I guess I could say I made progress in my skill level, progressing from tool handler to ladder holder before finally reaching the top of the ability ladder by doing some work while on the roof. They sure made it look a whole lot easier than when Linda and I replaced our slide toppers. 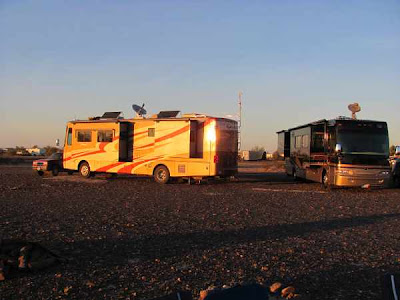 In the end it was a really great day, even if we almost got run over on our morning walk by one of those wild driver's who turned out to be Mark and Sue of What A Ride, but at least his driving skills were a good deal better than the fellow sitting next to him. Sorry readers, but in this case I am not naming names nor telling what this all about to protect those that can't protect themselves.

Our friends George and Kelli from Betty's RV Park also stopped in to see us. We thought we had seen their coach drive in earlier in the day, and we were right. It's always amazing what wonderful people we seem to meet during our travels, and we had a great time catching up on things and filling them in a little more on the Quartzsite experience they would be taking part in. The perfect end to the day was the sunset, and I can bet Linda will post a photo of it, so I will show its glow as it illuminates the coach. This is what Life is all about.