Off to the Big Tent 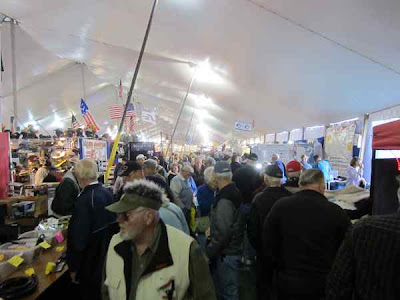 We had thought the crowds would not be as large in the Big Tent today, but it turned out that yesterday was the time to have gone as the crowds were much smaller than expected. Since we usually don't buy anything during our first time walking through, it was okay that it was crowded, but it was still hard to get to some of the booths. There appears to be tire pressure monitors in the offing this year, as well as some new outside chairs. It's likely that when we go back later in the week additional items will get added to the list. It has something to do with the cost of "my" tire pressure monitors being much more than "her" chairs. Maybe we really don't need those monitors after all. 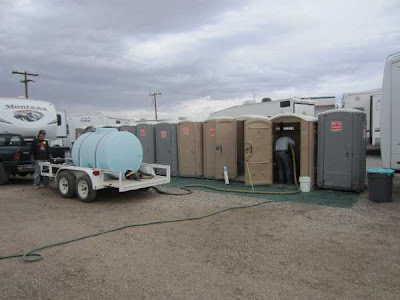 You can say what you want about the crowds in the Big Tent, but when it comes to porta potty cleanliness they are in a league of their own. Linda just couldn't resist taking a photo of the Quartzsite Big Tent Porta Potty Gang doing their thing. Earlier due to an unexpected uncontrollable urge, Linda got up close and personal with a pre-cleanout porta potty. And when she emerged I immediately posed the question, "At least you didn't faint, so how was it?"
"Blue water and no smell" was her immediate answer, which was accompanied with her trademark million watt smile so I knew what she was saying was true and accurate. I don't know if Linda is even capable on fibbing, though I suspect she has stretched the truth a mite on an occasion or two. As for me, anyone who has read these musings of mine for any time knows that the only thing I am capable of writing is truth and the whole truth, so help me. Oh, I almost forgot, anyone who would like to purchase a large bridge across the Hudson River can contact me at the above address. 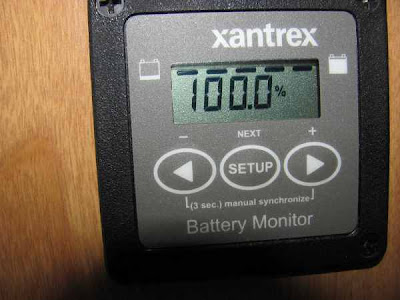 I have to say that our solar panels are working great. We have continued to run the generator early in the morning when we first get up so we can take the chill off with the heat pumps, but otherwise, all our power is coming from our four solar panels. If the sun is out for at least half the day, or the cloud cover is light, the battery has always charged 100%. Most people probably use their furnace to heat the coach, but we like it colder than most, and if you really think about it, you can heat the coach and not snuggle under the covers, or you can not heat the coach and snuggle. To us that is a no brainer. Your brains may think differently. I really didn't deserve to be this lucky in Life, but I'm glad I am. 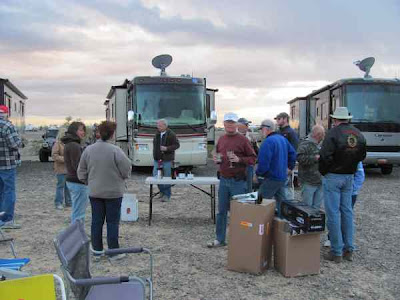 In the evening, Jon and the gang from Brazel's came by to talk about several of the products they are promoting at the show. There were exhaust brakes, engine chips, improved air filters and flow through mufflers. They also brought a number of adult beverages to share with the group in hopes of finding some forum members who might be more easily persuaded to purchase these items. As might be expected, some were more easily persuaded than others. I won't say who they were, but we should know in several weeks whether the claims of significant increases in mpg from these products are true our not.

In true Quartzsite fashion, just after they began their talk, the skies opened up and it began to rain. Then in more true Quartzsite fashion, everyone moved under Mike's too small awning, where despite the wet conditions, everyone laughed, listened, bought, and had a great time. Once again those that say Quartzsite is nothing but dust and crowds have no idea of what it really is. I know what we did tonight was repeated in other ways in many other areas around Quartzsite. Life is what you make it. Some people don't like life, and others love Life. The choice is up to you.