Unfortunately when we came out front this morning Red Rob had gone to great pond in the sky where the water is always just the perfect temperature and the mosquito larva are endless. He hadn't been himself the past week, very lethargic, which as best we could determine from the websites we read, was due to the variation in water temperature. Linda had even gone so far as filling some old canning jars with heated water, putting them around his tank, then covering everything with the insulated bag we use to bring frozen food home from the store in hot weather in hopes of keeping him warmer at night. We'd had him for 7 months and were sad to lose him as he was as personable as he was pretty. 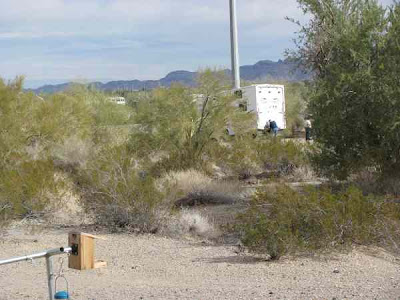 Later in the morning we noticed some activity across the wash behind us. There is road back there that has a pretty bad dip in it, and someone tried to cross it in Class A toyhauler when they shouldn't have. The long rear overhang got hung up, or so we surmised as the action of dragging it back out was almost over before we saw what was happening. Just another reason why we always scout out where we are going in the Explorer when we get here.

In the afternoon we drove down to La Posa South to check out the area where we will be moving to in a few days. Then we drove up north of town to the Hi Jolly 14-Day Camping Area to visit with Leonard and Val. Leonard is an RC plane enthusiast and had invited me out to the field several mornings to watch them fly before the daily winds come up. It is cold here in the morning, something that doesn't bother Leonard who is from Idaho, but I was finding that cuddling up to a snoozing grizzly was a great way to keep warm so the flying was going on without me.

We had a great time visiting and sharing experiences, which meant the afternoon just flew by. In fact it flew by so fast I didn't realize I hadn't taken any photos until we were back at the coach. For dinner we had leftovers that every bit as good as the first time we had them, and then it occured to us that we have eaten leftovers every evening since we arrived in Quartzsite. In a way that is exactly what Quartzsite is to us. We stay in pretty much the same places, go to pretty much the same vendors, buy pretty much the same things, yet no matter how many times we have done it, it is just as much fun as it was that very first time. As the saying goes, Quartzsite, you'll either love it or hate it. Easy to tell how we feel about it.