We really appreciate the many emails and comments we have received about Red Rob. Sure he was just a fish, and while many people have never had fish, please understand that little guy knew us and interacted with us. And yes there is a new Betta somewhere in our future, but we are going to wait until we are done boondocking in the desert before it happens. Linda has said that maybe we should pick our next Betta just as we did our Christmas trees when we would cut the one that no one else wanted. We shall see. And I will also do some checking to see if Red might have kept a diary or other writings of his Life and travels, as our reader Frank suggested might exist. 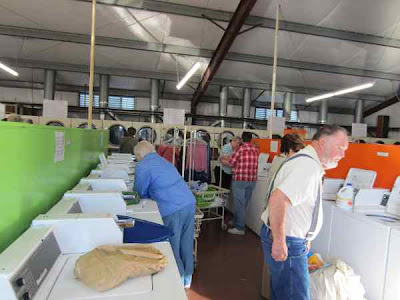 Monday has always been the traditional day to do the wash, and just because we never follow that convention doesn't mean we couldn't fight the crowds and do the laundry today. There are a number of places in town to wash your clothes, and we have used most of them over the years. Today it was the Main Street Laundry which is a short ways east of the center of town, on you guessed it, Main Street. And while it was very, very busy, I did find a parking space and Linda did find an available washer. 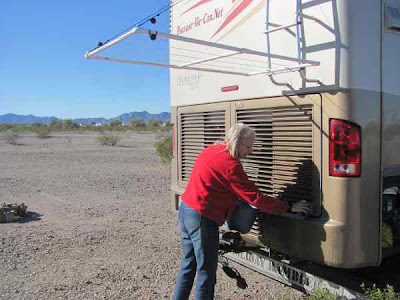 While the washing took place in town, the drying took place at the coach on the drying rack. First however there was some coach washing that took place. There is no way that clothes drying on the rack can contact the coach, but Linda was taking no chances. My position was she had merely rearranged the dirt on the back of the coach. I don't know exactly what her position was, but the glare she gave me could have caused a male grizzly to run away whimpering as it disappeared with its tail tucked between his legs. Bob said nothing more. Good Bob. 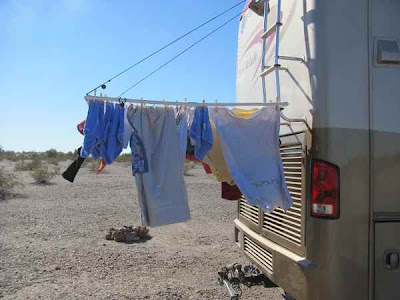 The answer to the question, does Linda love her drying rack, has the same answer as does Linda love chocolate. In the past 45 years there have been lot of Bad Bob situations and at least a few of Good Bob's as well. I have to think this ranks up near the top of the Good Bob list, which should give you an idea of just how bad the Bad Bob's really were. Lucky Bob that Linda has never done him in, in spite of all the times she wanted to. 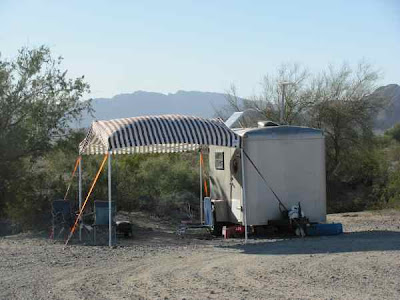 RV's come in all shapes and sizes in Quartzsite, but during our afternoon walk we saw one that gave new meaning to the idea of a tiny RV. Solar panel on top, roof vent, TV antenna, propane tank, the only thing missing was what in German is called lebensraum, i.e., adequate space in which to live, develop, or function. Or at least it looked that way to us. Room to sleep, or to cook? What about the three lawn chairs under the veranda? If I had to live that close to Linda all the time, I'd soon be clawed to death. And it would no doubt be very deserved. 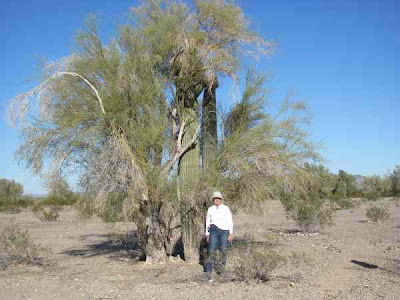 "Take my picture in front of this old Saguaro, I love that gnarled top."
"Yes dear." 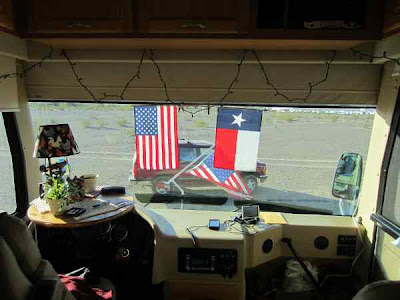 View to the front. I guess you could say we have officially become Texans as we now proudly display the Texas flag. Funny thing is that we know a number of full timers that are from South Dakota, and never have we seen them display the the flag of that state. I don't know what that really means, but since there are more than twice as many people who live in Houston as live in the entire state of South Dakota, I have a pretty good idea. I guess it's a case of Texans not needing to brag, and South Dakotan's not have anything to brag about. 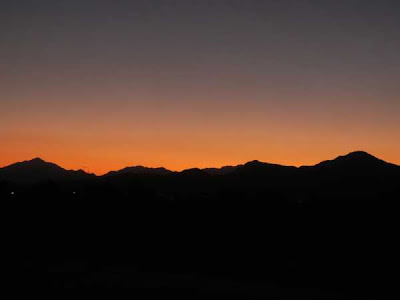 Sunset in Quartzsite, just couldn't pass this one up. And remember, Life is not a dress rehearsal. Don't be afraid to laugh, love and retire early.