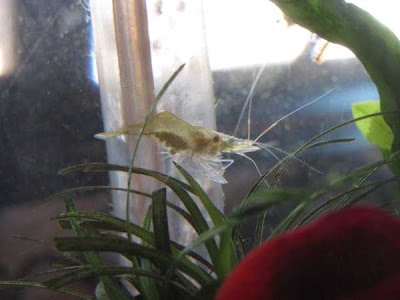 It's true! We didn't even know it was a she, and now she is carrying her eggs just like all the Internet photo's show ghost shrimp carry their eggs. For much of the day she just sat on the plant leaves, then in the early evening she simply disappeared. Look as much as I might, I never could find her. I've read ghost shrimp will sometimes dig burrows and maybe that is what she has done. Wow, this aquarium is even cooler than I could have ever imagined. But little shrimp are very unlikely as the odds of any surviving for more than a day or two after they hatch a few weeks from now, are slim to none While shopping we stopped at Staples so Linda could pick up two things she needed to keep the home office running smoothly and efficiently. First was several plastic sheets to hold business cards from fellow fulltimers as the ones we have are full. The other was to find a certain special folder that would hold all of last years receipts, something that she really dug into. 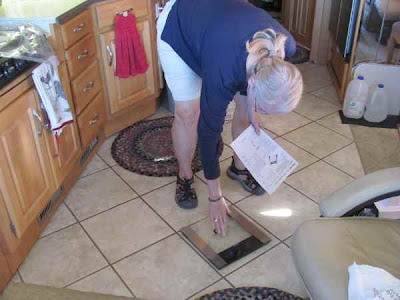 An impulse purchase, as our current scale was nearly seven years old. Linda has been protesting that it is in error and that she can't weigh that much. Maybe she was right. The new scale indicates her weight is nearly a pound less than what the old scale reported. Linda is happy. Bob is unhappy. The new scale reports he actually weighs 0.8 pounds more than the old scale showed he weighed. And all this was with a side by side comparison where we weighed on the old scaled then immediately stepped on the new scale and weighed again. Linda is happy. Life is good. Bob is still scratching his head wondering how she managed this little trick. 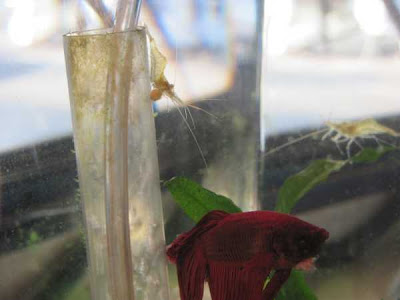 This is not the shrimp that is carry the eggs. This is the thief shrimp that stole one of Red's food pellets. We got the shrimp to eat the algae, which they did, but the algae is now growing again and instead of eating it they are stealing Red's food. Obviously shrimp are more than something tasty that you dip into cocktail sauce before popping them into your mouth. They are downright smart little critters. Life, we can sit and watch it pass by, or we hop on board and enjoy the ride, the choice is ours.