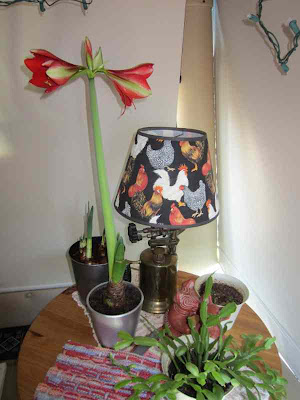 See, it really truly wasn't a rabbit. That Amaryllis wasn't wasting any time once it started to bud, and today we had two blooms with two more yet to open. I had thought we picked out a bright red flowering bulb, but Linda looked me in the eye and said, "We picked one that the bulb looked right." Now I remember, I had three or four picked out but in each case she found something wrong, before she found the perfect bulb. I guess I was so glad that we finally found one she would approve of that I paid no attention to what the photo of the flower on the box was like. The grizzly growls and the forest trembles. 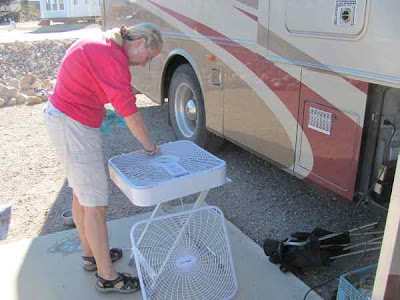 Speaking of grizzly's, here's the old she bear handling one of the many little jobs each of us worked on during the day. We bought this fan for $15 two and a half years ago, and it is still running, which is probably due as much to Linda's care of it as to durability. The plastic blades are cracked, it was covered in dust, but with a little disassembly, which involved slicing my finger open necessitating a quick trip for a band aid on Linda's part, she soon had it clean as new. Later as it was running she commented that it was working much better now that it was clean. Who was I to argue with that? 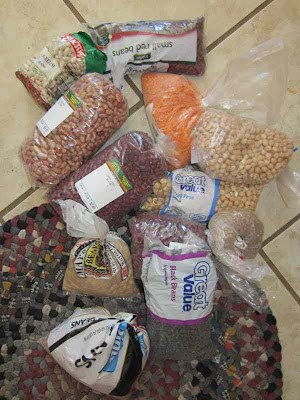 Beans, do we have beans. It's what happens when you use one of the many nooks and crannies that come with the RV to store your beans. I also heard some growling about all the work it took to cook beans from scratch, but I think that was an excuse to try to get me to volunteer to fix them. Years ago I used to cook a pot of southwestern beans every weekend, but that was in our former life. Maybe it is a case of Life imitating life, but I think I ended up volunteering to do it once again whenever there is room in the refrigerator. Hard to believe I married a grizzly with the name of Tom Sawyer, but it appears to be true.

I don't mind though because today is a special day. It was 45 years ago tonight that I first saw Linda. We remember the date because I had to go down to YWCA in Columbus, Ohio where she was living at the time to be approved by her before I could go on a blind date with her on Friday. As she has explained to me many times over the years, she had standards.