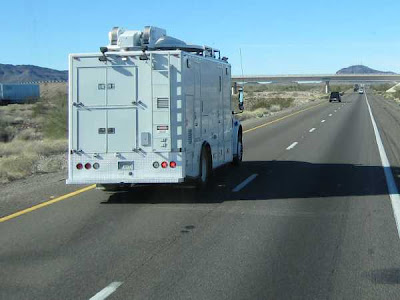 Easy drive to Quartzsite, as we just followed US 60 west to where I-17 begins, then up to I-10 and west to Quartzsite. I don't like taking I-10 through Phoenix, which is probably why the GPS routed us on US 60 today. It was likely tired of hearing me grumble about how stupid it was when it came to routing us through cities. As for the truck in the photo, the entire top of the truck was covered by a gigantic satellite dish. I can just hear the driver going down the road passing RV's, all the while muttering, "That's not a dish on top of your RV mate, THIS is a dish. 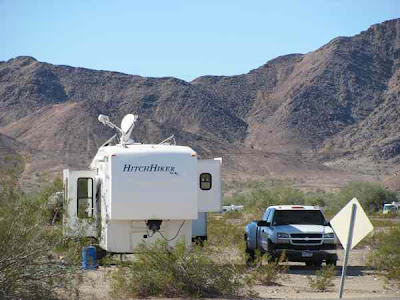 It was early afternoon when we pulled into La Posa North, the LTVA we will be calling home for the next ten days or so. As usual, we unhooked and drove around looking for that perfect spot, and were pleased to see that Ron and Terry of Hitchitch were in the special spot they try to get every year. They must have just arrived because there was no awning up or hot tub to be seen. If you didn't read about their hot tub a few years back you missed one of the great moments in RV blogging. 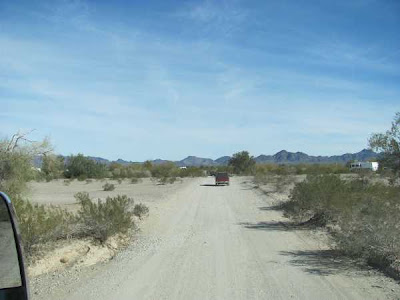 It took some searching, but eventually we found the perfect spot, one that turned out to be near where we had stayed a few years ago. This is the best road we drove on getting back to it, though we were pleasantly surprised at how well the tracks through the desert were holding up once we were off this road. What really surprised us was that one of the dry creek crossings that had been getting worse and worse every year, had been widened out as well as smoothed up. That's not smooth as in smooth, that's smooth as in not bone jarring. But that is also one of the things that makes Quartzsite, Quartzsite. 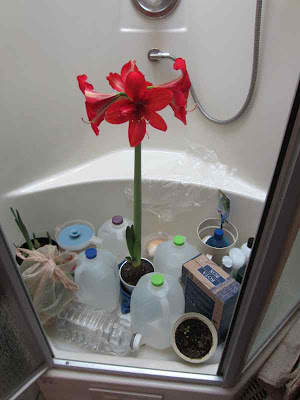 Just to prove it wasn't as bad as my words might indicate, the Amaryllis survived without any damage what so ever. And as Linda pointed out, there was even another use for all those bottles of drinking water she was bringing, they made excellent packing to hold the Amaryllis steady during the trip. At least I was smart enough not to pipe up with something about my great driving having more to do with our safe passage than her big jugs did. Smart Bob. Good Bob. 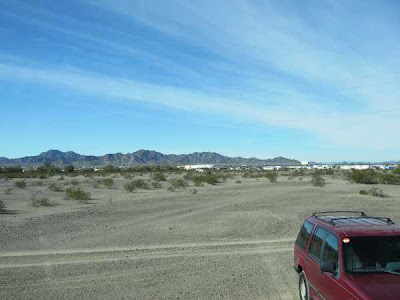 The view to the front. In the far distance the Big Tent was going up. Over the next week or so there will be a few more RV's parking in the distance every day. They will be far enough away that our view out the front, at least Linda's view, of the Quartzsite sunsets will be spectacular. We always park at a little angle to the northwest to better align the solar panels. I don't know how much it actually helps, but it makes us think it does, and that works for us. 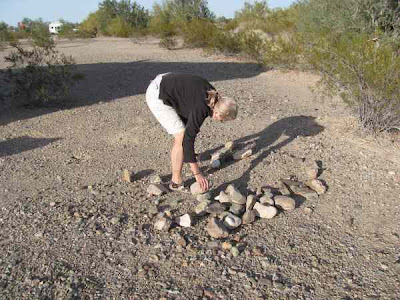 The view to the rear. The first thing Linda wanted done was to build a fire ring. First off I managed to get a nasty scratch from a Palo Verde tree while reaching for a rock where I shouldn't have been reaching, at least in a short sleeved shirt. Then no sooner did we get the fire ring built than Linda decided it was in the wrong place and we ended up rebuilding it some distance away. One thing we have learned is that the way we park the coach and the way the wind usually blows means that the only protected area is off the back corner of the coach on the drivers side. That's where we set up our lawn chairs, and it is where we moved the fire ring. And when the second fire ring turned out better than the first, it really brought a big smile to my girl's face. And that made it more than worthwhile. 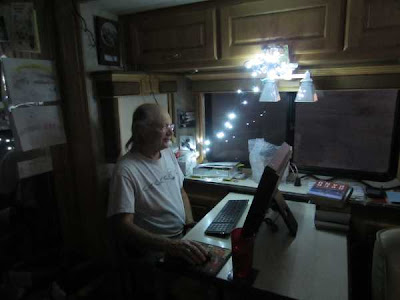 Night time in the city of Quartzsite. Everyone has their own things they do when they boondock, and this is a new one for us. We have four solar panels on the roof, a big bank of batteries and a huge generator, so electricity is not a concern. What we do when we stay at Q is to go back to our decades of camping in a tent, years when conservation of water and energy was the key to success.

Something new for us was to use a bundled up string of LED Christmas lights for an overhead light. The whole string uses just .04 amps, and with the inverter on because of the computer, it is a very efficient way of providing some light. A little odd you say? I'll tell you that you don't know know the meaning of odd until you've seen some of the really odd things that appear in the desert around Quartzsite, which may be exactly why we enjoy this place so much.