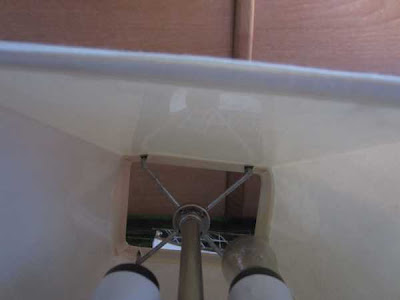 It began with a discussion about the potential possibility of perhaps replacing the bulbs in our wall sconce with LED bulbs. During that discussion, thankfully for which no record exists, concern was expressed as to whether the replacement bulbs would fit in the small space available. This photo was Linda's way solving the problem. Let's just say that during this entire enterprise, from original idea to not buying any of the bulbs, I toed the mark once I realized what my role was and from that point on which was nothing but a Good Bob. Maybe when the price comes down there will be LED bulbs in our future, but for now Bob's Bulb Ball is good enough. 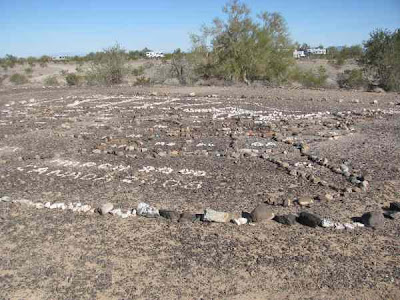 Back from our non-buying shopping trip, we decided we needed a walk and set out into a rather stiff wind only to discover this. I know I've read about this on other blogs, but it was still a surprise when we stumbled upon it. At first Linda thought all those rocks were a sort of maze, which was partly right. Add an "A" to the beginning and and a "D" to the end and what you get is amazed. Which is exactly what we were when we realized it was a very accurate map of the US and Canada. 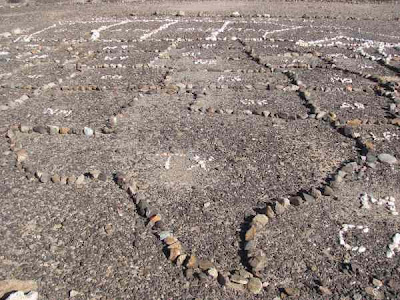 The best part of the map. I wonder what percentage of people who stay at La Posa South ever stumble across this piece of art? Or even know that it is there for that matter. It is why we would always carry the trash up to the dumpsters everyday instead of driving. Exercise and new experiences, what could be better. 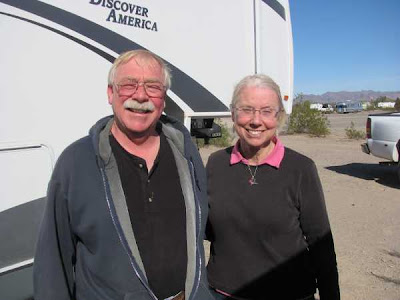 Actually there is something better, and that is visiting with friends you only get to see on occasion. Ron and Terry of the Hitchitch website were in their usual spot in La Posa North and we just had to stop by before we left even though they had posted they were suffering from colds and visitors should be forewarned. We had a great time catching up on some of the things that there just isn't time to write about, and while Ron was camera shy as usual, Terry more than made up for his recalcitrance with a smile that matched Linda's.

It's been almost three weeks since we arrived in Quartzsite, but it is time to move on down the road to a place we absolutely love and is nearly the opposite of Quartzsite in several ways. Such is the nature of the full time Life, the RV has wheels for a reason and there is always something new, even if it a place we have been to before. I guess Life is rightly, just as interesting and exciting as we decide it should be.