It's a new year 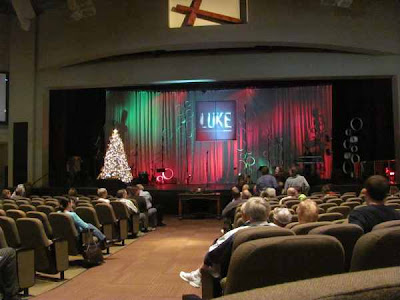 We have a megachurch we like to attend when we are in this area of Phoenix, so that was where we went this morning. It's 22 miles from here to the Mesa Campus of Central Christian Church, which I guess means we don't just like that church, we really like that church. As luck would have it, the senior pastor was on vacation this weekend, but we still got a great deal out of the service. We'll probably go back again next week, especially since the other church we like in the area is 66 miles away on the exact opposite corner of the Phoenix metro area. 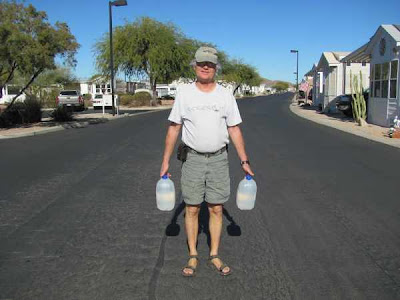 One thing about this park that everyone can agree on is that the water is terrible. Not just merely bad, but loaded with minerals terrible. In all our years of fulltiming this is only the second place we have stayed where the water was so bad as to be undrinkable. Fortunately they have a water dispenser up by the office, and so we were off to get several gallons, at a quarter per gallon. I had carried the empties up to the dispenser, so I figured that Linda would carry them back. Guess I was wrong. 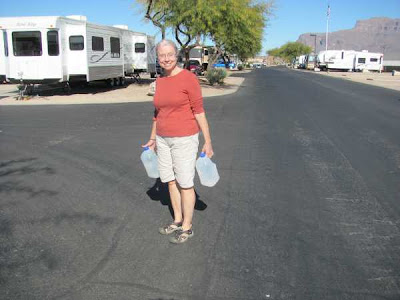 Then I took a page from Tom Sawyer and started talking about all the benefits of walking with weights. You could raise and lower your arms, you could swing the containers gently, but what ever it was, you would be in better shape because of it. Miracles of miracles, it actually worked, because we hadn't gone very far before she asked for both of them. Eventually she gave one back, but never once did she complain as she exercised her way back to the coach. Too bad I don't have a clue what it was I said or did that actually got her to start carrying those two containers. Oh well, such is Life. 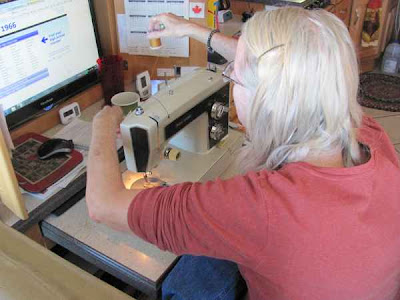 Linda must have made a resolution about sewing because once back at the coach she got out her sewing machine and started to hem a pair of my blue jeans. She has been saying that she was going to do this for two or three months, and here she was doing it. Will wonders never cease? Or will New Year's resolutions last? For now I will just take what it is that happens because I really did need those jeans hemmed. Good Linda. 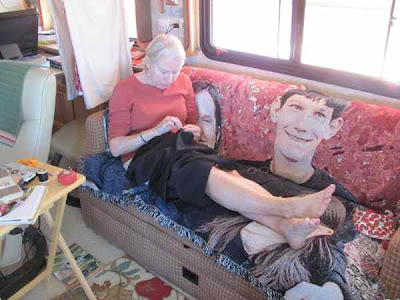 When it rains, it pours. Or, when Linda sews, she really sews. I did my own catching up as this is the fourth Daily Journal I have written today. One last thing was the pork tenderloin we grilled for dinner. As long as we have been married we have eaten pork on New Year's Day, and this was no exception. Marinated since yesterday in a vinegar based barbecue sauce, it turned out to be juicy and mouth watering good. Now I'm afraid I have no where to go but down, at least in the grilling department. While that might not be the best way to start off the new year, it sure was a tasty way.