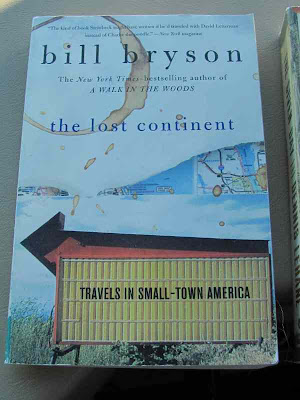 With John and Judy leaving this morning it was a time for saying goodbye, but also a time for exchanging books. It was after they were gone that Linda said to me, "You know that Bill Bryson book?"
"Yes, it was really good" I replied.
"Well, you're going to laugh at me just as you did reading that book."
I was puzzled by her comment, and started to say something when she continued, "I thought those were coffee stains on the front where I'd spilled coffee on it. I was trying to scrub them off when I realized it was a design on the cover." I laughed with her and told her that was really funny. You can bet it was another of those times when I sure wasn't going to tell her what I was thinking. 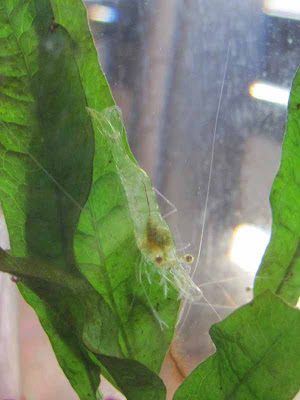 A few days ago we added the replacement ghost shrimp to the aquarium in hopes of controlling an algae outbreak on the leaves of the two plants. Those shrimp may not be perfect eating machines, but they are certainly beginning to clean things up. Besides, we are both getting a lot of fun out of just watching them with their 5 pairs of jointed walking legs, 5 pairs of swimming legs (swimmerets), 3 pairs of maxillae (feeding appendages)and two pairs of segmented sensory antennae. Before we got this aquarium I thought shrimp were only good for eating, which tells you how much attention I paid in biology class. 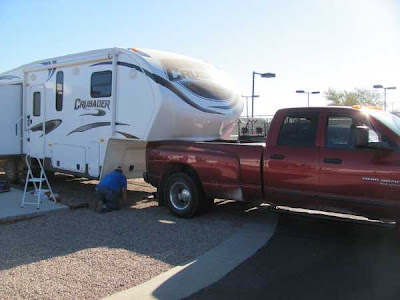 Look close and you will see this isn't the normal way to unhitch a 5th wheel, as the front section of the 5th wheel is resting on the bed of the pickup. It worked out great as the Pickleball courts were nearby, there was a foursome playing, and there were two chairs positioned so we could watch the action on the court and also the action around the RV. There were three guys working to overcome the problem, and from what we picked up, it sounded like the 5th wheel had not been chocked, causing the oops. It really didn't take them more than 20 to 30 minutes to fix everything. Except for some bent trim on the pickup. And you thought you were having a bad day.