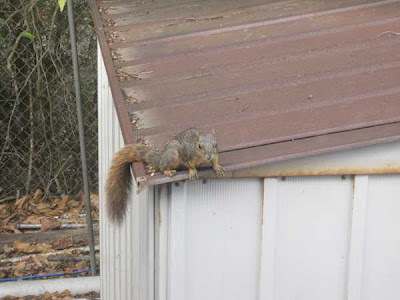 Not sure why, but I really wasn't into doing much of anything today, and if Linda hadn't asked about spending some time in town, I would have probably just sat in front of the computer until it was time for happy hour. I had to chuckle at this squirrel that was outside our window as he seemed to be thinking the same thing. Every once in a while we would pause and looked inside the coach as if wondering why that human could be so lazy when there were acorns to gather and other work to be done. And something tells me Linda was wondering the same thing. 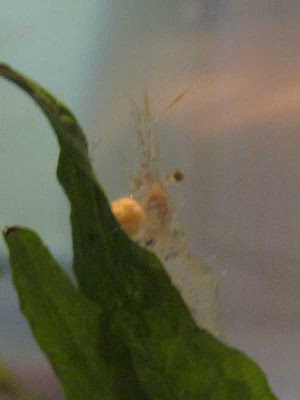 It was Linda that interrupted my train of non-thoughts with, "Look at what Casper's got!" Looking at the aquarium this is what I saw. The tan ball is one of Red Rob's floating fish food pellets that he hadn't eaten. It was being held firmly by Casper as he perched on a leaf of our new plant, and he was busy munching away at it. We'd read that ghost shrimp will eat any leftover fish food, and by golly, it was true. Later, when we noticed the the big tan area in Casper's innards we knew for sure that he had been eating that pellet and not just holding on to it. Life just doesn't get any more exciting than this, at least on some days it doesn't.

Email ThisBlogThis!Share to TwitterShare to FacebookShare to Pinterest
Labels: Louisiana