Sunrise to sunset with electronic malfunctions in between Dec 20 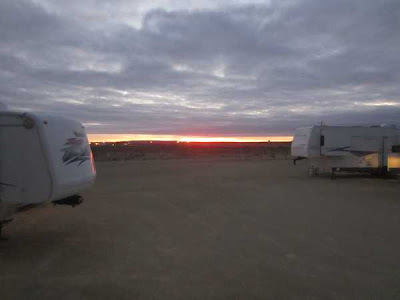 It was a cold morning and we were up early because we had many miles to go today. The thing is, the coach really, really does NOT like cold weather, and it was in fine form this morning. It started when I retracted the jacks and the jacks down light would not go off. By any visual check, the jacks were up, but the panel said they weren't, which meant as soon as I put the coach into drive, the alarm started ringing. We've come to expect this, and it was only a few feet of travel before we had tuned it out. 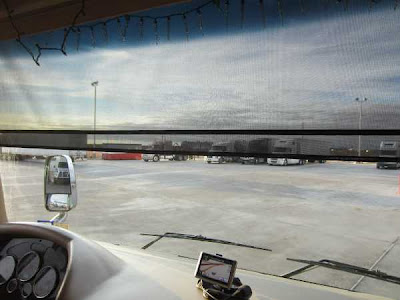 Accompanied by the dinging of the jacks down alarm we no longer were paying attention to, we prepared to exit the park. We had to backtrack a few miles to the closest diesel station, which meant driving east into a very bright sun that wasn't far above the horizon. Anticipating the blinding light we would receive the moment we turned east, I lowered the front MCD sunshade as we drove out the park exit. The problem was that it went down all the way, then when I realized it was so low it interfered with being able to see the road while driving, it wouldn't go up.

Peering under it, we drove to the fuel stop, filled and then pulled off to the side of the truck parking area to fix it. OK, it was right in the middle of the exit from the station, but that shade was going to have to go up. Had the fuse blown? Had the programming come unprogrammed? Who knew, but one thing was sure. There was no way of fastening the shade up above the line of site. It was going to have to be fixed before we went anywhere. 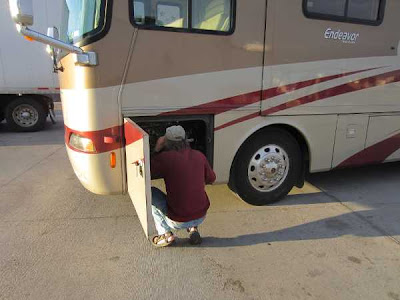 Trucks passing to the right of us. Trucks passing to the left of, roared and thundered, all the while I searched for the right fuse, one in a hundred. Finally I found it, pulled it like a bad tooth and replaced it with one that worked. Back in the coach I asked Linda if she had tried the switch, only to learn that she was taking a photo of the bad fuse. I will say nothing. I will say nothing. I will say nothing. And because of that, I will live. And yes, the new fuse solved the problem and within minutes we were on the road. Life, it's what you make it. As long as you let grizzly's do their thing. 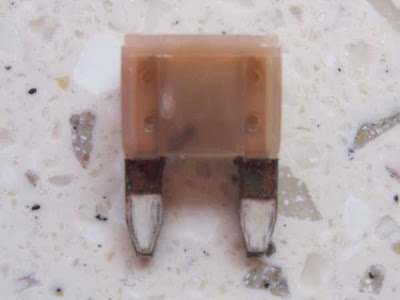 I guess that after all she went through to take a photo of the blown fuse, I would be remiss if I didn't post it. Thinking about all that was said as we discussed what might be wrong with the sunshade, and then how to fix it, it would probably be best if I just let sleeping grizzlies lay. Smart Bob. 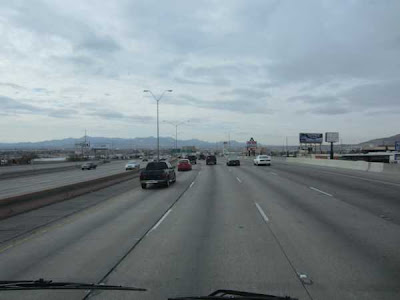 Many miles today, but we shared the driving, except when we got to my least favorite city, El Paso. I've figured out why I don't like it. It's because there are almost 30 miles miles of congested driving from one side of El Paso on I-10 to the other. The lanes are narrow, there is always construction, and unlike every other city we encounter, there is simply no good way to go around it. Now I know why it is only 7:30 as I write this, and already I feel like it is time for bed. Some people don't like broccoli, I don't like El Paso. 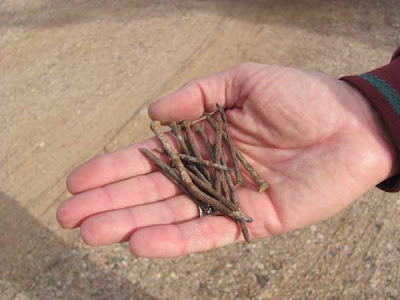 Nails. I know this doesn't seem to have anything to do with electronic malfunctions, but really it does. When we finally arrived at Pancho Villa State Park, we ran into a problem. Or more properly, several problems. Neither the WineGard nor the MotoSat would connect. No matter what she did, and believe me, she knows every trick in the book, they would not work. In the end we took a walk around the park to calm the grizzly, and upon our return, with a clear mind, she solved the problems. As for the nails, we picked them up while walking back to the coach along the park road. After all, this was a military base at one time, and the evidence is all around us. 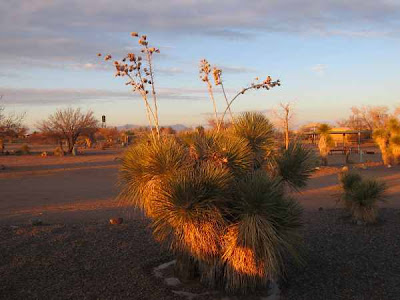 Several resets of the DirecTV box finally solved that problem. For the MotoSat, she concluded it had lost its mind, and proceeded to give it a brain transplant, reloading the satellite tables and recalibrating the dish. And as I knew it would, the next search brought in the 91W satellite with no problem. It had certainly been a day of electronic problems, yet in every case we had overcome them. 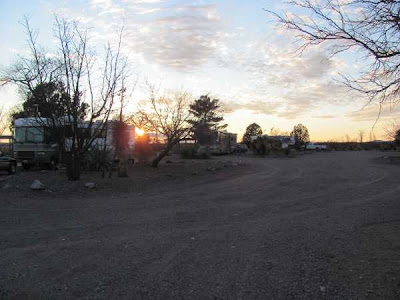 Sunset at Pancho Villa State Park in Columbus, New Mexico. Dusty, open, 30 amp electric and water pull thru sites, no sewer hookups, with cactus being the principle landscaping. This week it is expected to be exceptionally cold with day time highs in the 40's to low 50's and night time lows from the upper 20's to the low 20's. It isn't for everyone, and the few RVs in the park prove that fact. Yet it is a place that we really love, having been here some five times over the years. We all know what we like, and this is a place we like, irregardless of the weather. Besides, our electronic problems appear to be fixed, meaning Life is good, and who could ask for more.