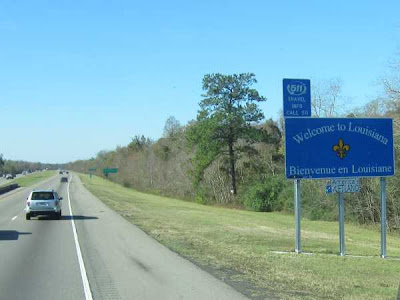 Another travel day, this time some two hundred miles to Abbeville, Louisiana where Betty's RV Park awaited. It was also another day of traveling on the kind of roads we prefer to avoid, the Interstates. Here construction, there construction, everywhere you drive construction. Sometimes the road was rough sometimes it wasn't, but most of the time it was less than ideal. Unfortunately, the ability to build good roads that last for more than a few years seems to have escaped the people who design and build the roads in this state. 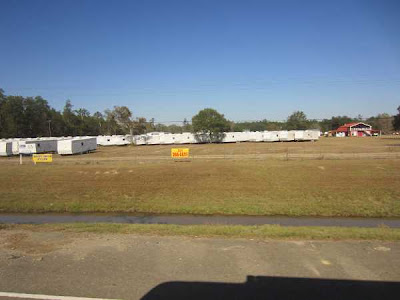 A field full of FEMA trailers. The sign along the road said: Trailers starting at $2000. I guess that they are worth every penny of that amount. We didn't stop, but some people must. If it is what they want, then that is what they get. 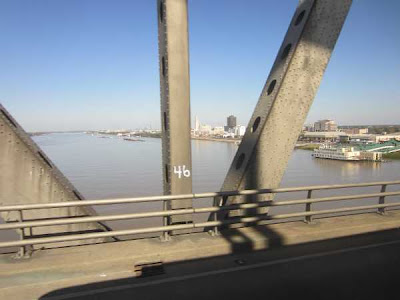 Picture of the Mississippi taken on the I-10 bridge. Looking at the 6 or 7 photo's Linda took of our river crossing, I was shocked to see that only one of them had her usual trademark of more bridge than river in the photo. What's next? A river crossing where she only takes photo's of the river and not the bridge. Will wonders and miracles never cease. 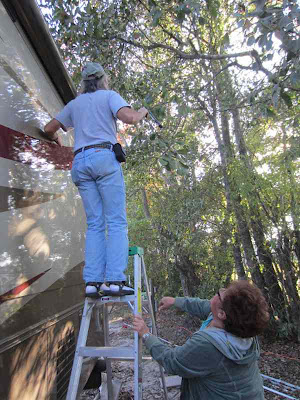 Our destination was Betty's RV Park, which we had heard so much about, and which we found to be unique to say the least. And that was after we arrived at Betty's. I will not go into what happened when I was in the right lane to turn left just north of town and Linda told me not to turn. I really was supposed to turn left, but she had me turn right, which was most definitely not right. Eventually the wrong right was righted, and what was left is best left unsaid.

Most RV parks take your money and that's it. At Betty's we discovered that there was more. Not only did we have to pay for our site, we also had to work for our site. With a tree limb threatening to touch the bedroom slideout, Betty provided ladder and loppers, while I provided the labor to do a little tree trimming. We were told that we wouldn't believe the experience of staying at Betty's, and even though we had only been here a few minutes, we realized how true it was. 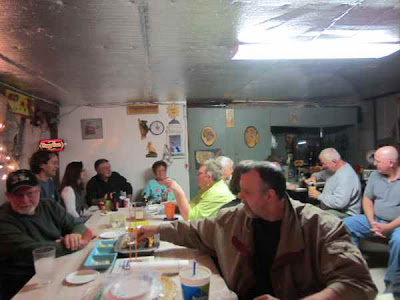 At 4:30 something else that makes staying a Betty's unique commenced. The nightly happy hour, which in this case lasted for over a happy hour and a half, which may or may not be typical. Already we have extended another night, making our stay four nights, plus tomorrow night we will be going into town with a group from the park to take part in the 13th annual Abbeville Christmas Stroll. As for what the following couple of days at Betty's will bring, who knows, but it is what makes Betty's, Betty's, and also life, Life.