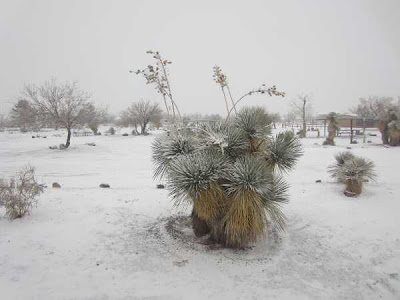 This is what greeted us this morning, a beautiful snowy landscape. The storm had come through during the night and we were actually on the southern edge of it. Interstate 10 across much of New Mexico was closed due to snow and ice, but we weren't going anywhere, so it was of no consequence to us. That meant we had time to enjoy the snow covered Sotol outside the coach. 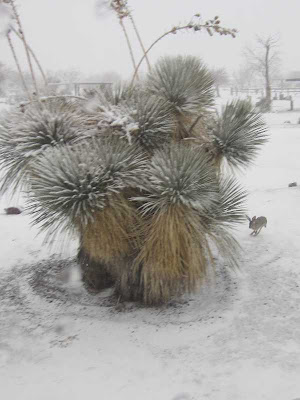 Then we discovered we weren't the only ones looking at that Sotol. Out in the expanse of snow Linda caught sight of a jack rabbit wandering around, and as she reached for her camera, it started making a rabbit line to our Sotol. She caught it in mid hop just before it ducked under cover. It must have been a case of any port in a storm because that rabbit stayed safely tucked under the Sotol until I later ventured outside, at which time he took off like the proverbial scared rabbit. 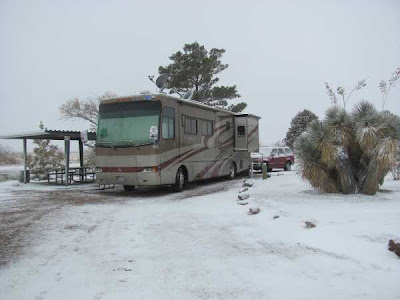 What a beautiful sight, at least when you look at someone's blog and see a scene like this. It hasn't been very many times that we were the ones in this scene, but we pretty much remember every time it was. My favorite had to be a few years ago in Moab when we woke up to 5 or six inches of snow, then drove into Arches National Park to see a winter wonderland. It's OK to do it on occasion, we just don't want to make a habit of it. 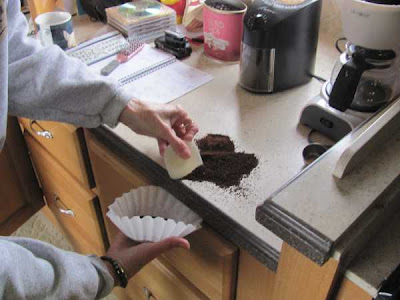 Not good, but at least she didn't spill any on the floor. I asked her, "What happened?" and the reply was "You don't what to know." My first thought was to say I at least knew she had spilled the coffee, but then I thought better of it and kept my mouth shut. Good Bob. Later she volunteered that she was weighing it when it spilled. Seems she bought a pound of already ground Dunkin' Donuts coffee, and she needed to know how much of it to put in the coffee maker when she starts using it. I'll just say that just goes to prove how smart she is and leave out anything about her being a klutz. P.S. She didn't write down what the weight of the coffee was what with spilling it, and now she doesn't remember what it was. I may have to re-evaluate the smart portion of that above sentence. 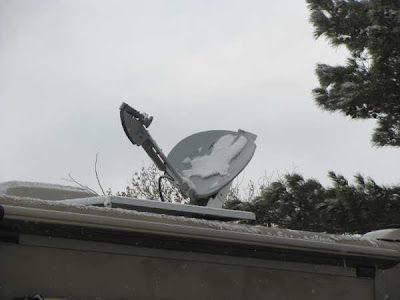 In the afternoon the MotoSat stopped working, and a check outside revealed the cause, snow on the dish. It's mounted in the center of the roof and climbing the ladder revealed a snow and ice covered expanse which not even the foolhardy would cross. That lead to a little brainstorming as to how best to dislodge that snow, with this being the result. 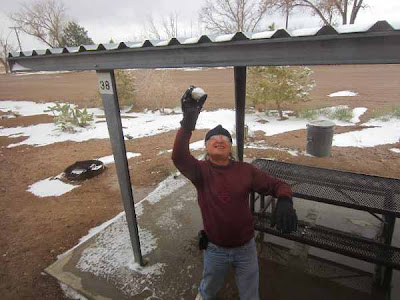 I thought it was a pretty good idea. I wasn't sure what Linda thought because she was laughing so hard it was difficult to see her face. It took at least ten snowballs before I even hit the dish, not because my aim was that bad, or at least in my mind it wasn't. No, the problem was the wind was blowing my throws off their planned trajectory. Eventually I hit the dish twice, and both times the only thing that happened was another blob of snow stuck to the dish. Back to the drawing board. 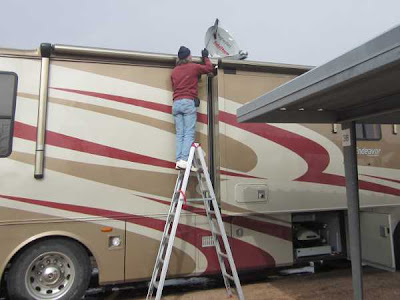 Linda proposed stowing the dish and redeploying it. Unfortunately that did nothing to dislodge any of the snow. I was standing outside looking at the dish when it came to me that I could probably reach the dish with our broom if I stood on the ladder. Guess what? It worked like a charm and a little later Linda had us back online.

We did have another problem during the day, one that I have saved for last. When I got up this morning shortly after 4 AM, it was just above freezing and the refrigerator was working. Then around 6:30 I noticed it was off. The outside temperature was also down to 28 with a wind chill of 15. It never got above 31 all day and the refrigerator never came back on. Nothing we could do with the roads being closed. I have to hope that it is a temperature related problem and with highs in the upper 30's tomorrow, it will come back on. At least we don't need to worry about getting ice for it. We can just put things down in the bay where it is in the upper 20's.

Wonder what tomorrow will bring? Whatever it is, it is most likely not to be boring. As for us, we are awaiting a package at the Post Office, and if it doesn't come tomorrow, we will just take advantage of the refrigerator temperatures nature is providing, put everything down below and spend the weekend here. It the package comes we may head off to the warm weather in Phoenix, hoping that temporarily solves the reoccuring cold weather Notcold Norcold problem. Like I said during a phone call with our son when he asked how we could keep smiling through all this. "What good does getting upset do."