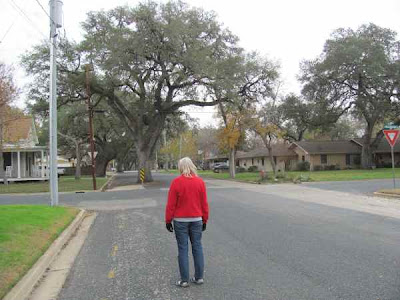 This is exactly what small town America is all about, and why we choose to stay in small towns. It's only a tree, but they chose to save it because it represents something. I can think back to a street that was widened near where we used to live. The street where the beautiful big oak tree beside the street had it roots chopped off so the sleaze bag pedophiles of the Catholic Church that owned the property on the other side of the street could retain all their property and also extract more money from those stupid enough to think that they actually cared about souls. Like they say, there's a sucker born every minute. 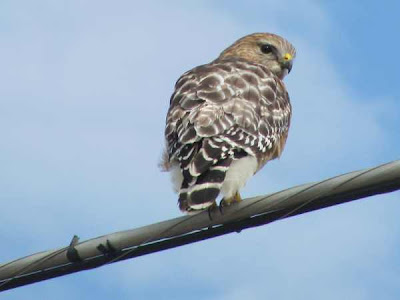 We spent a good portion of the morning just walking around the town of La Grange. It had a magnificent town square that surrounded a beautiful stone courthouse that was built in 1891. Many of the buildings in the downtown area had that special something that said they were privy to the history of the town. In our travels we pass though many old towns that we say we would like to stop in, yet we never do. How wonderful it is to be actually enjoy one of them. We get caught up in life in the fast lane, but this is Life in the slow lane, where even hawks don't fly off as strangers pass them by. 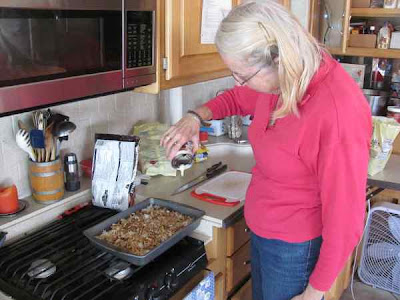 I really like the way the woman in this photo thinks. The lady in the office at this RV park treated us really nice when we checked in and Linda wanted to do something special for her. So she made a pan of her awesome chocolate nut Christmas bars, then proceeded to take about 10 percent of the pan over to the lady. Guess what is going to happen to the the remaining 90% of the pan, oops, 70% of the pan since I had to do a little quality checking as well as eating the edge pieces that might have been over baked. I have to hope Linda will need to do the same thing at our next RV park tomorrow, at which point I will suggest that she shouldn't give them some day old baked goods, but should bake a fresh pan. Smart Bob. Full of Christmas goodies Bob. Fat Bob 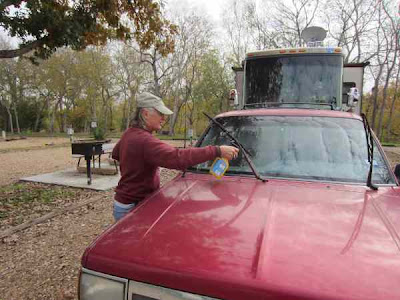 I understand that anyone reading Linda's blog could get the idea that I might be a perfect person, but really, every year I do one or two things that prove I might be only 99.9999% perfect. Today was one of those days. The weather report was calling for the possibility of rain tomorrow, and so I needed to apply Rainex to the windshield of the coach.

In that case, just what was I doing applying Rainex to the Explorer's windshield since we would be towing it behind the coach? I have utterly no idea, and that only goes to prove that I am truly not perfect, just nearly so. In the end I did do the same thing to the coach windshield, only to have Linda later tell me that rain is no longer in the forecast for tomorrow. Who knows, maybe my application of Rainex to the two vehicles scared the rain away. Either way it should mean an easier passage through San Antonio, which will certainly be nice. That's all for today, as we journey to the SKP park in Hondo, Texas tomorrow, then hopefully get our refrigerator safety module installed on Monday, before heading towards the New Mexico/Mexico border for Christmas and New Years.