Three posts today as I catch up from a brief bout of self doubt and writing lethargy. 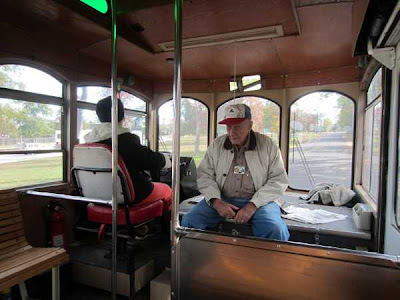 We are staying at Rainbow's End, an Escapee Park in Livingston and yesterday we toured the CARE Center, which is an adult day care center that is associated with Escapees. We will likely be volunteering for a month this summer as that is the time of the year when they have a very difficult time securing enough volunteers due to the heat and humidity of East Texas. Many years ago those using this facility were what we are today, and some time in the distant future we may be them. From each according to their ability, to each according to their need, and now we are the place in our lives that we have the ability to volunteer. Today we shifted gears and went on the tour of the park and the mail sorting facility, getting to see our mail folder. 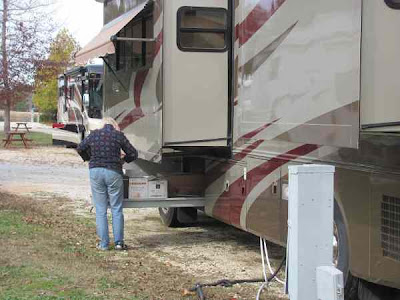 In the afternoon Linda decided that we deserved a special dessert during the Christmas Season. Here she is digging out the chocolate chips, pecans, walnuts and coconut to make that very special dessert bar of hers. It is one of those things that fills the coach with smells that drive a person crazy as she mixes it, then smells even better when it bakes. Once out of the oven, the need for quality control testing is immediately apparent, a test procedure that requires multiple samples to ensure testing accuracy. Some times Life is a win-win, and this was one of those moments, at least for the fellow who was doing the quality control testing. 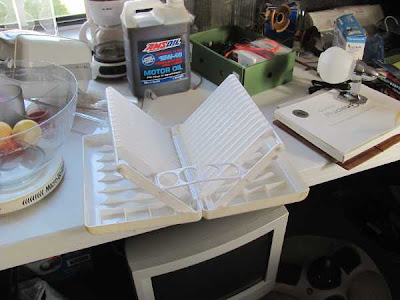 Unfortunately with all the testing that was needed, there was also an equal amount of exercise needed to offset the calories consumed during the testing process. That led us to walk around the park, ending up at the activity center where we stopped to check out what was available on the donation table. As we walked up, Linda suddenly stopped and out came, "Oh, my gosh, oh my gosh" and she wasn't referring to the gallon of AMSOIL.

For years she has searched for another dish drainer like the one we use, and there it was right in front of her! We were the only ones in the entire building at the time, but she was taking no chances, picking it up and ordering me to immediately put some money in the donation box. Later, as we walked back to the coach I asked what she would do if she finds another one some day. "Why I'd get it, you can't have to many of them" was her answer. With her displaying logic like that, I know don't stand a chance. Life, great and getting even better. 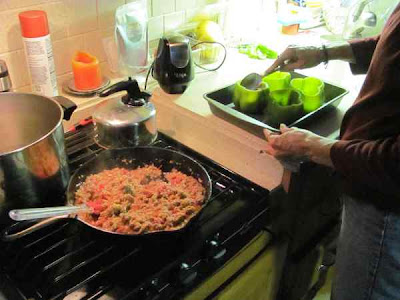 The day ended with Linda cooking supper, and also making sure I knew it. As I said to her, "350 plus days a year I fix the meals, so it is OK if you want to do it one in a while. I just wish I had the ability to turn back the clock and fix more meals over the previous forty years, I was so oblivious of the little things that would have meant so much, but I am working on them now." None of us are perfect, nor is Life is not perfect, but there is always tomorrow.