An even colder day in Livingston 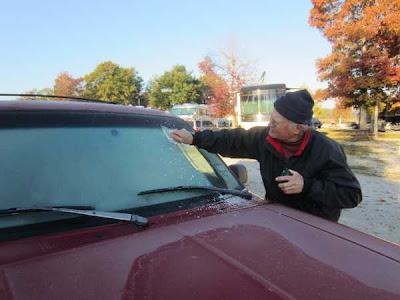 Yesterday may have been cold but today was far colder, and tonight is supposed to have temperatures in the mid 20's. We were here in Livingston this same time last year, and it is like deja vue all over again. Note the improvised ice scrapper, which in our Life is not supposed to be needed. The reason for being out at this hour of the morning was entirely due to Linda.

This morning we were off to the laboratory up near the hospital so she could get her Well Woman blood work done. The early hour had something to with not eating for so many hours before the test, and add to that, Linda having a strong aversion to starving herself. I don't mean to imply that she eats too much because she certainly doesn't, but when the time to eat arrives, the food better be ready and in front of her. So the earlier we arrived at the lab, the sooner she would get to eat, hence my scrapping the frost off the Explorer's windshield.

I will leave out the part about her going in the front door of the very large building the lab was in, walking all the way to the far end of the building, then back to the entrance without seeing the sign for the lab. Once back at the entrance, right in front of her was lab. In the meantime I'd walked away from the building, only to return and find her wandering around the parking lot looking for the Explorer. Since I'd dropped her off at the front door, then parked I couldn't blame her for not knowing where I'd parked, but it did seem to be in line with her problem locating the lab. Good Bob for not mentioning it. 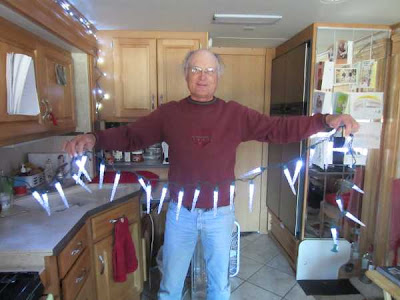 One of the things we have always enjoyed is just how easy it is to decorate the coach for Christmas. Every year we try to get something new, and this year it was the fiber optic tree. Then at WalMart this morning I saw this string of LED icicle lights, and I knew exactly where they would go. A few command strip hangers across the top of the inside of the windshield, and we have icicles hanging across the front of the coach. Add to that the cool white light strings that drape the slides and the front, casting a glow throughout the interior of the coach, and Christmas is indeed a special time.