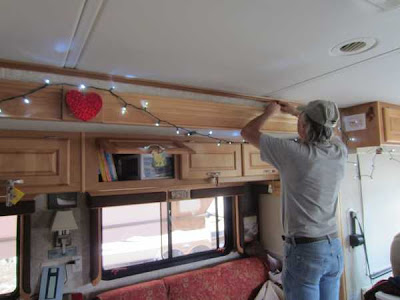 This was the day for finishing up a few odds and ends before we start heading west. First off was installing additional cup hooks in the wood trim at the top of the front road slide. We have strings of LED lights along both slides and across the front of the coach, but they did not look the same. Now that we have installed the additional cup hooks the sides still don't look the same, but at least there are the same number of cup hooks at similar spacing for all three places. Who knows, maybe we will tweak them some more next year. 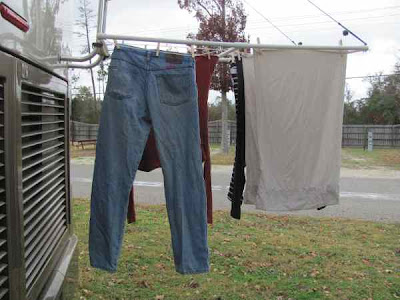 The only purpose of this photo is to show that Linda has kept intact her record of doing a load of wash every day since we built the drying rack. As far as the post on how we built it: The photo's have been taken. Finally!! A rough outline was written and the beginnings of the web page is on the computer. Now I just have to finish it, but as I might have suspected, I was a little optimistic in when I would have it done. I do promise though, it is being written and should be posted by next week some time, probably, hopefully, maybe, perhaps. 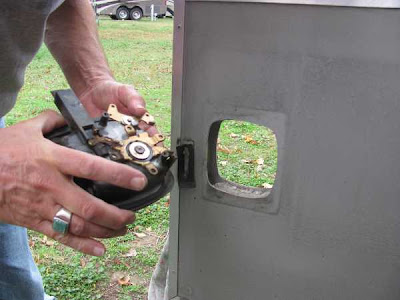 The next item on the list was a bay door latch that would lock or not lock or not unlock, or at least it seemed that way. The bay locks all make a loud click when they lock or unlock, however in the past month I have had problems with the electrical bay lock, locking. The click was no more and sometimes it would lock and sometimes not. Today we took it out of the door, hopefully to be fixed. 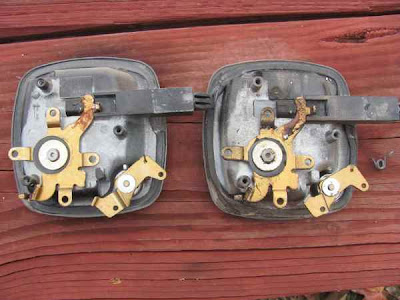 Once the latch was removed from the door, the problem became apparent, especially when I saw a small spring laying in the bottom of the opening where the latch had been. The only problem was where did the spring go. That puzzle was solved by taking out another latch, one that worked. A little observation, pick up the spring with my needle nose pliers while Linda cupped her hands under the latch to hopefully prevent a fatal case of fly away spring, should that affliction strike. 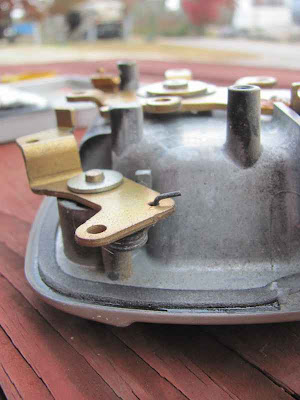 It really wasn't very hard to reattach the spring, still the big smile that accompanied the "You did it" from Linda made me feel like I just put a watch together from scratch. I can see it now, early cave man manages to light a fire in the cave to which his woman says, "You did it" while smiling at him. The next thing you know he's out of that cave like a flash, and a short time later comes back dragging a mammoth behind him. I have to believe that over the eons we have been programmed by woman. We will never understand them, but does it really matter? 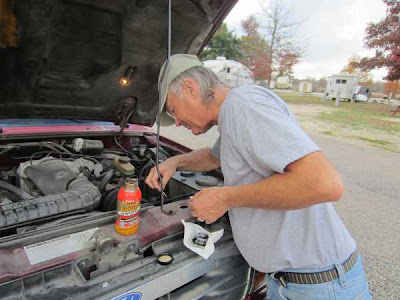 The next job was to finally add the Bar's Leak to the Explorer's radiator. We have been carrying the can around for the several weeks, but unless we added it to the cooling system we would never know if it would solve the problem of the slowly disappearing coolant. Hats off to Daily Journal reader Pat for suggesting this fix. 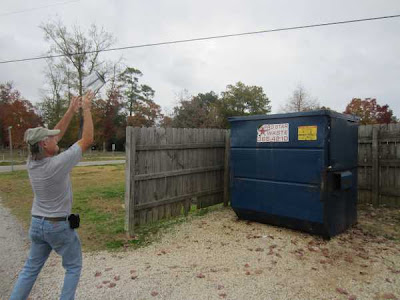 I have a game I play whenever we are here at Rainbow's End. Most people take their trash to the dumpster, open the side door and toss it in. Not me. The top of the dumpster is open, so I use it as a giant basketball hoop, and "shoot" the trash into it. Most people see railroad tracks, but some see the city the tracks take you to. Even the routine can be made special if we open our eyes to the possibilities.