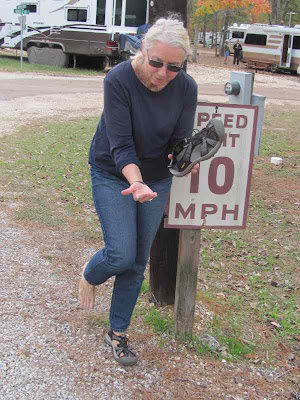 Most of what we did today shall remain just that, which is what we did without anyone knowing what it was. As far as what we did that you should know, here is an example. In the afternoon we walked up to the Activity Center, then over to the Mail Center, where Linda was happy to find we had a number of pieces of mail. She was going to be a happy girl when we got back to the coach, but before that she had a problem. A massive boulder of at least a micron in size found its way into her Keen sandal, meaning she had to stop and remove it. If her parents would have had the gift of precognition, I have to believe her name would have been Woody Footie ********. 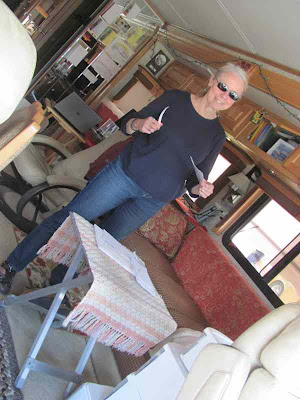 Don't think for a minute that Linda doesn't enjoy getting her mail, because truth be told, there is nothing that she enjoys more than getting the mail. At least nothing that we talk about in the presence of others, that is. I have to think that one of the reasons she likes staying at Rainbow's End is exactly because of this. She gets to rewind her Life back to the days when as a little girl she wasn't allowed to get the mail, only now she is allowed to get the mail. I'll just chalk it up to another mystery of Life or Women, take your pick. 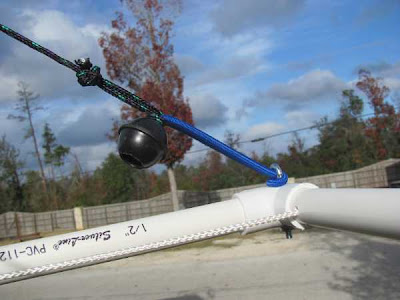 In the aftenoon we took a whole bunch of photos of the new clothes drying rack. That's a whole bunch, as in many, many, many photos, some of which will NOT find their way into the webpage I plan to make for our drying rack. I had thought I had enough photos, but then she who orders, and I who obey, came back to where I was doing my photography. Needless to say, there are now enough photos to produce a multi-volume series on how to make a PVC clothes drying rack. I still plan to get it done this week, but with the need to sort through hundreds of photos, it may get pushed back a day or two. [Editor's comment: you all do know he exaggerates, don't you!!] 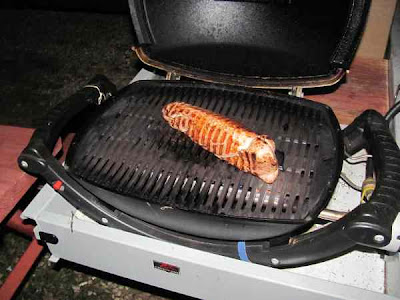 She who commands, decreed that dinner tonight would be grilled pork tenderloin, so I poured a generous amoumt of our vinegar based sauce into a Zip Loc bag, resulting in a grilled tenderloin that was probably the best we have ever had. Linda did comment that the green beans we had with it were a little bit to spicy side, but in my infinite wisdom, I will refrained from mentioning that Linda was the person that added the spices to those green beans. That classifies as a Good Bob, if there ever was one. 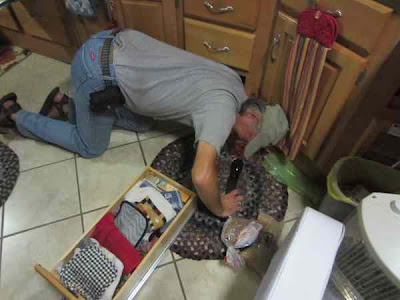 There is far more to this photo than meets the eye, but I don't know if I should reveal what that is. Oh well, what do I have to lose other than my life.

I needed a knife to slice the pork tenderloin, and aftr finding one, I discovered I needed to shapen it. Only the knife sharpener was missing. That led to drawers being removed and various commodities that included several types of beans being retrieved from the behind our drawers. Let's just say that I was mutering things that might better have been left unmuttered. I still hadn't found the knife shapener when Linda took over, eventually finding it in the drawer it was supposed to be in. And that was when I learned that she who is a grizzly, is best to be deferred to. Fortunately I still have all my appendages, and now know that whatever she that commandeth wants, I who obeyeth had better do.

As always, we need to remember that Life is what we make it. It is just that sometimes we forget that there are people who came make it pleasant or misserable. Linda, from this moment I vow that whatever your wish is, it is my command. Like I said, Life is what we make. It's just that sometimes we need to remember who it is that makes it what it is. All Hail Linda, Most wonderful Woman ever created.