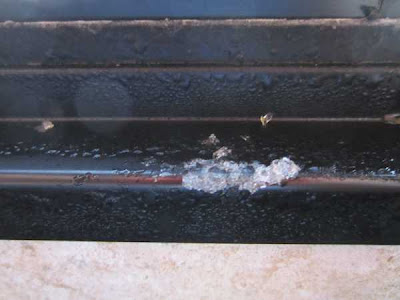 It was a cold morning, the overnight low being in the mid teens, with the thermometer showing 18 when I first looked at it this morning. Later, after it had warmed up considerably, Linda came out announcing it was so cold in the bathroom there was ice on the window frame, and she had a photo to prove it. Just so everyone will know what she exposed herself to during her early morning duties, here it is. At least she didn't have to have me come back and pour water on the toilet seat to get her unfrozen. Now that would really have been an experience and a half, none of which could ever be talked about. 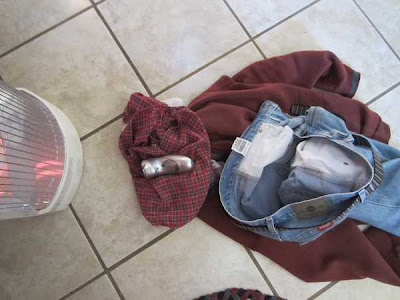 If I talk about her, I'd better balance it out by pointing out that as far as I was concerned, it was also cold. But where there's a will, there's a way, and a few minutes in front of our heater does wonders. I usually don't heat my clothes, just my razor, but since it was Christmas, I though I would treat myself. Actually it wasn't bad at all in the front half of the coach, as it was 54, then once Linda got up, she turned on the furnace and soon I was taking off clothes rather than putting them on. As I was to later learn the reason for all this was the timer on her electric blanket had turned it off and she had gotten cold. Poor baby. 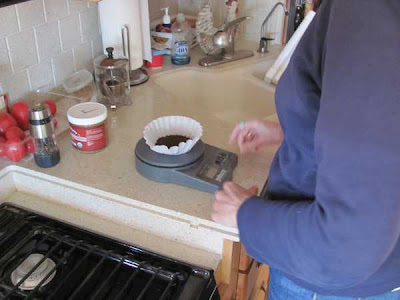 Success! No coffee was dumped all over the counter this morning, and to have a record the number so she can find it again, it was ??? It turns out that she was so proud of not spilling any coffee and wanting that photo taken, that she didn't write the number down. So as I was writing this, I asked her what it was so I could record it here, and she didn't remember it!!! This is where years of marriage come to the fore, and I said nothing, but I bet you can imagine what I was thinking about my blond wife. 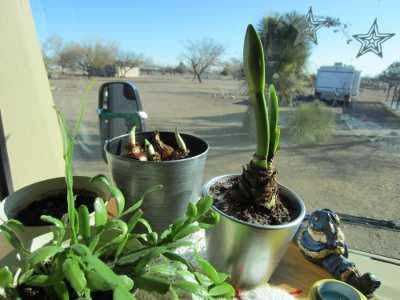 Neither the amaryllis nor the Christmas cactus was in bloom, but it sure looks like we're going to see something by New Years. Besides we do have snow on the ground, and even if it is just in a few shaded places around the cactus and sotol, it's a white Christmas. 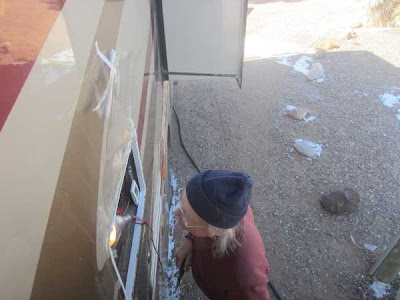 Now that we know the secret to the Notcold Norcold, it is just a matter of going out in the morning, placing the hair drier in the right spot, turning it on, waiting a half hour, then reconnecting the 12 volt power wire. A couple of clicks, and the green light is on, meaning our Notcold is a Nowcold. Besides, our neighbor is having his water line freeze every night, so it could be worse. Our solution to that is to not connect the water, but use our fresh water tank and water pump instead. 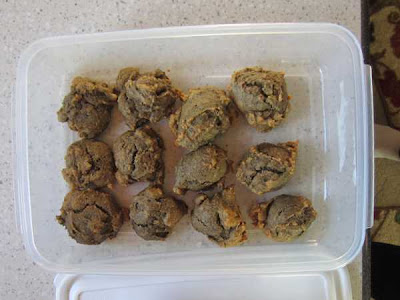 Christmas cookies, real, genuine homemade on Christmas Day persimmon Christmas cookies. Linda was so cheerful, a big smile constantly on her face as she mixed and baked them, that I didn't have the heart to do any quality control testing. Later I commented, "You are so happy when you bake cookies, I can tell you really love to bake." She smiled and said, "Or maybe I just like to eat cookie dough." 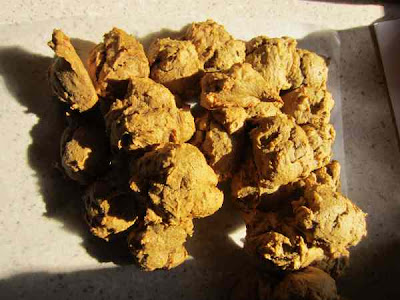 This was the photo Linda took of her cookies, and as usual she has zoomed in as close as possible. I took one look at it and decided it looked more like what cookies look like after they have been internally processed and deposited by the cookie monster. When I told what it it looked like, she said, "It does, doesn't it." Once we both stopped laughing, I thought just how amazing it is, the number of ways we can show love to those that mean so much to us. 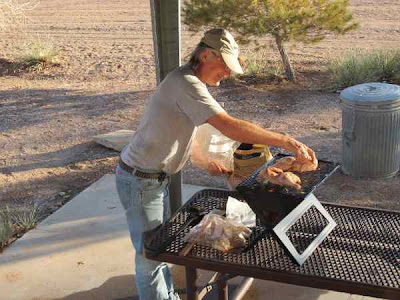 Our Christmas Dinner was grilled marinated spilt chicken halves, the free range kind from Shipshewana. We hadn't gilled on the charcoal grill since our time in the Upper Peninsula, so this was a real treat. As before we used our large stainless steel bowl to cover them for the last 20 minutes or so after turning them, making them finger licking good as the juicy meat just fell off the bone.

Last year we spent Christmas in California with our kids and grandkids, this year we talked to them on the phone. But just like last year, it was a time spent with family, though just not in the same way. We both thought about them getting together, fixing the same dishes Mom always fixed. Connections, traditions, and the passing of time. Nothing stays the same, nothing is forever. During our time on earth let us actually live our lives, after all Life is not a dress rehearsal.