When it rains, it pours, and not always is it water 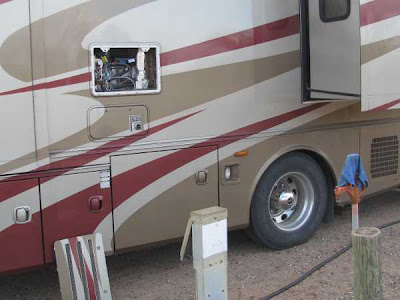 No, it's not what it seems though we were doing something else to the refrigerator. Now that it is working like it should we were getting water in the produce keeper. Checking, the tray below the fins, we could see it was full of water, meaning the drain tube was not draining. Linda got a pin, and when I used it to clean the black thing at the end of the tube, water immediately started dripping out. I put it back into the little black pan by the burner tube, and checking it a while later found the pan almost full. Using a rag to sop up the water it was soon empty, a task that need to be repeated once again. 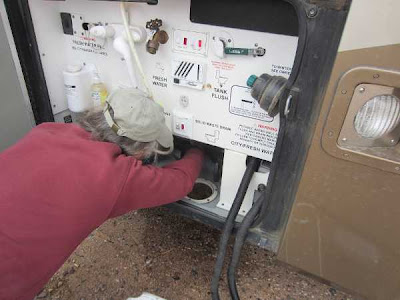 The weather forecast for the next several days is for a severe winter storm, with temperatures plummeting into the low teens and daytime highs below or at freezing. The last time we turned on the heater for the wet bay, the small 12 volt DC heater that keeps our water lines from freezing, the pilot lights hadn't come on, but I ascribed that to the fact the pilot lights were probably burned out, something that happens with regularity in these Monaco made coaches.

However we didn't want to take any chances, so I removed the heater so we could test it and confirm that it was still working. I couldn't do it in the bay because it wasn't cold enough outside for the heater to come on, so with some stretching of muscles that weren't used to being stretched, as well as some disconnecting of electrical connections by feel, out it came. 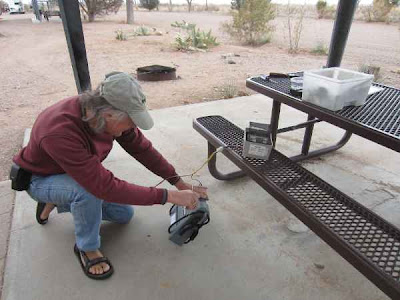 Easy to test once out, I got out the jump start battery from the Explorer and hooked it up. Nada, Zip, Nothing. Looking at the charge of the jump battery it was good, but down, so maybe that was the problem. While I set about recharging the battery, Linda got on the Internet and found out the heater had a thermal fuse that is often the culprit when the heater stops working. 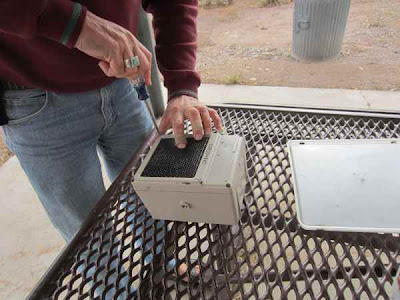 Not good, because a quick test showed there was no continuity across the fuse. This was not something that going to get fixed today, and besides there was another key component of the system that could also be out, which was the snap disc thermostat. OK, so the heater wasn't going to be working for sure, but just as certainly, it was going to be getting downright cold over the next couple of days. 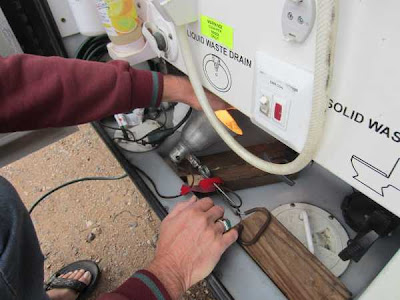 Back to an old standby I remembered from growing up in a house with a coal furnace. On nights when it was going to get really, really cold, we had lights aimed at all the critical points in the plumbing down in the basement. It worked then, unless the temperature fell far below zero, so why wouldn't the same idea work now. All we needed to do was to keep the pipes and tanks from freezing, not make the bay livable, so we put the work light in the bay. 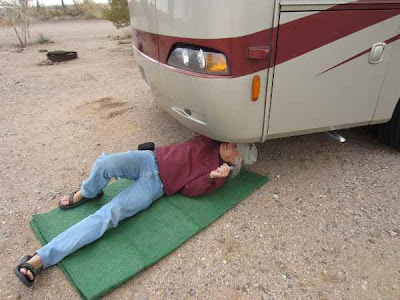 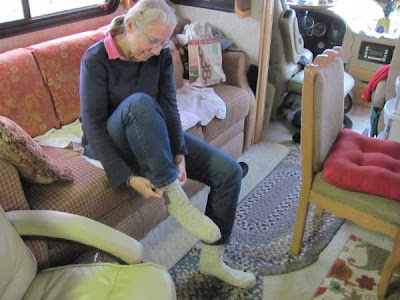 I will say that brilliant blond that I was fortunate enough to marry is not one to leave things to chance. It isn't supposed to get that cold tonight, tomorrow night is the cold one, but she was preparing anyway. Sometime during the night the snow is supposed to move in, so there should be a world of white greeting us in the morning.

What can we say. Life is not perfect, the fulltime Life is not some idyllic, always in the sun with every moment great fun, voyage from day to day. Or at least it isn't for us and the people we know. But considering the alternative, what's not to love about this Life we fulltimers live. Besides. things that break can be fixed, but a life never lived is gone forever.