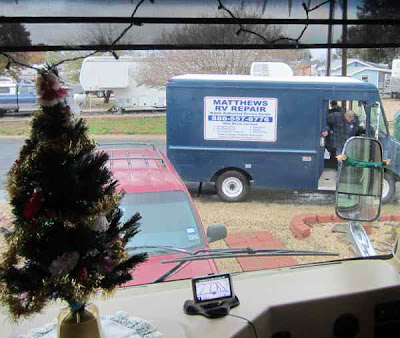 We got our Norcold safety module replaced early this morning, when Murphy showed up just before 9 o'clock. We had originally thought we would be staying in Hondo for two nights then stopping at Seminole Canyon State Park. Checking we found there were no tours at the State Park until Wednesday, which would put us into Columbus, New Mexico on Friday at the earliest. Major change in plans. We headed out to Fort Stockton as soon as Murphy was finished, and will continue on to Pancho Villa State Park in Columbus, NM on Tuesday. At least that is the plan at this moment. 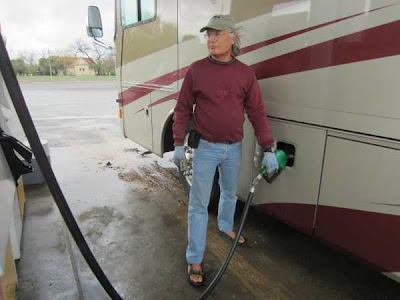 No telling how many times over the years we have filled the coach with diesel, but today was a little different. Small town, big service station, but their cut-outs in the curb were sized for cars, not trucks. While there we saw a semi do an unbelievable rock and roll as he entered the lot. While ours wasn't that bad, we did do a little shaking.

This was the truck pump, but the turn was so tight I could only turn into the outside pump. It was no wonder there weren't any trucks refueling. The pump ended up having the small hose instead of the larger truck hose. And of course when Linda went inside to prepay, the line was practically out the door with people buying everything but fuel. The kicker was the big mud track right where I needed to stand. At least we got a nice break from driving, even if nothing else seemed to go right. 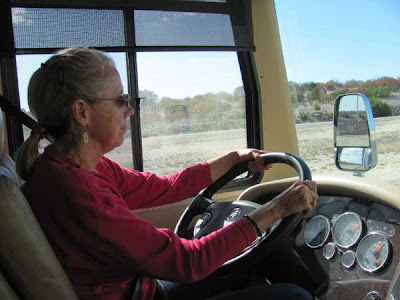 Why was it that most of the time I drove, at least in the morning, it was raining, but once Linda took over the sun came out? It had been nearly a year since she had last been behind the wheel, and I noticed several deep breaths before she started out. As always, she did a great job, getting us there safely and beating several snails in the process, though a turtle did manage to beat her. 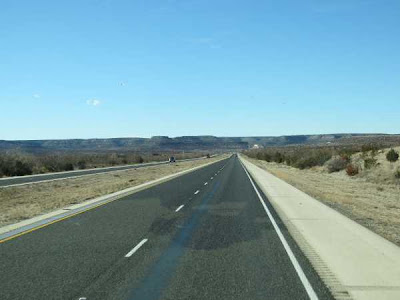 We were on the road about six hours with the stops we made along the way, traveling on both State Highways and the Interstate. We got to view some marvelous scenery, and the last part of the trip was through the wide open spaces that we have missed so much during the past nine months that we have been back east. And tomorrow there will be even more of it as we head to our Christmas stopping spot. And even though the forecast is for much colder than normal weather, Life is great.