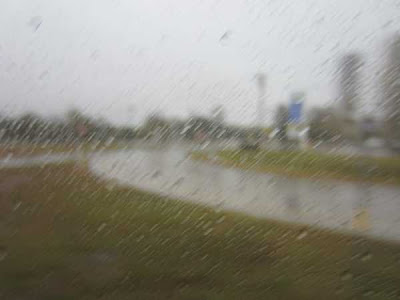 OK, got the rain out of the way, although it was with us all day. Morning came and the grizzly growled, the itching and scratching and other assorted sounds and smells of the actions of a normal grizzly getting up and going accompanying it. Some things are best left to the readers imagination, and I'll leave it go at that. I have been remiss lately at providing details of the delectable, delicious, delightful breakfasts that I prepare every morning, but not today.

That old saying about breakfast being the spice of Life couldn't be more true, even if there isn't much spice in our breakfasts because she who decrees to he who obeys, has indicated that she does not like much spice on her breakfast. This morning breakfast was perfectly diced sweet onions, sweet peppers, and garlic with a chopped half of a Portabella mushroom added for a little extra. Once this was cooked down, two whipped eggs which had a little milk added were stirred in and folded a number of times while they cooked. Topped with four cheese blend, diced tomatoes and chipolte sauce, it made for a great breakfast. 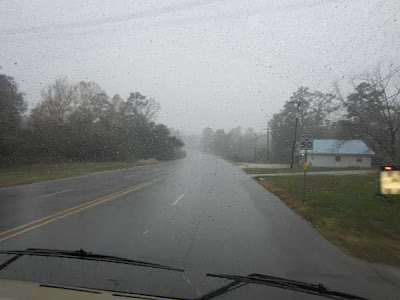 We very seldom drive on days when it rains, and I can say that we have never, in our six years of fulltiming, ever driven in as heavy a rain for as long as we did today. For nearly all of the five hour drive rain came down, sometimes a mere drizzle, other times so ferocious it was difficult to see the road. And even though it had been predicted, we still hadn't expected it to be nearly as bad as it was. 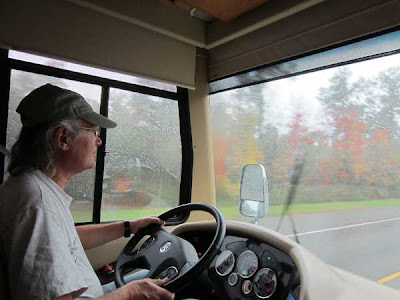 When it rains, it pours, and today it more that poured. Our destination was our home park, Rainbow's End in Livingston, Texas, and once there the rain never let up. We joke we come back her to visit our file folder, but really, we do enjoy our time here. I did get to check out my new to me raincoat we bought at the Unclaimed Baggage Store, and I was pleasantly surprised to learn that it was most definitely not a leaker. As night descended, the rain never let up, and still we were warm and comfortable in our home on wheels.

Our new LED Christmas Tree was an object of splendor on the dash. The Internet was working, the aquarium functioning and the TV showing HD movies, plus Desperate Housewives and Pan AM. Dinner was cooking, giving off odors that were to die for, and all the while we were warm and cozy. Life is what we make it, and we have to wonder if we could make it any better than this. Some people never take a chance, and others wonder how they could be so lucky to live the Life they do. We know which person we are, but which person are you?