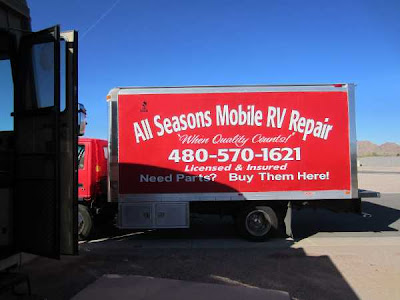 It's not really what it appears to be, though it sure looks like it. I'd talked to Don at All Seasons the other day about our refrigerator problem, and he said he would be out our way in a couple of days and would stop by. Turned to he was already working on a coach a few spots from us, and stopped in on a trip to that coach. He took a quick look, asked a couple of questions, and in the end we ended up with some free advice. Need to connect to a direct 12 volt source when it goes out, like the coach battery to eliminate the cause being RF interference, if it still doesn't work the board is the cause, and we should get a Dinosaur Board to replace it. We can do that ourselves, just be careful when installing it. The frig has worked like a charm since we arrived, so we will take that advice and try to stay out of cold weather for now. 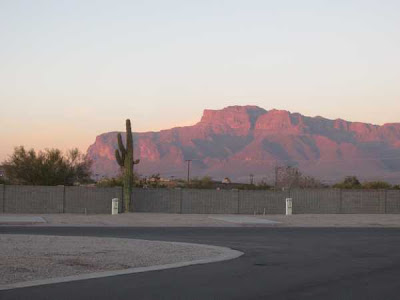 Superstition Mountain rises up in front of us, and as the sun sets it turns red. Temperatures in the 70's and scenery like this, what's not to like about the Phoenix area. Maybe that is the problem, as all day RVs were pulling into the park, the traffic on the roads was increasing, and the snowbirds continued to flock to where it is warm. 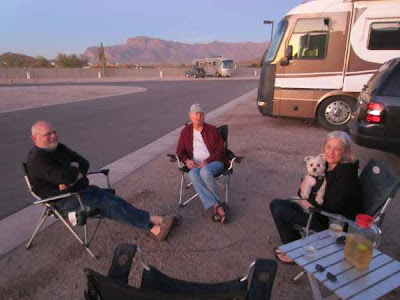 In the late after our friends John and Judy stopped to spend the night as they were passing through the Phoenix area. We had a great visit, not having seen them since late summer, getting caught up on the latest happenings and future plans. There is something very special about RV friends, maybe it is the long periods of time between visits. Maybe it is the common Life we live. Whatever it is, we are always better for having spent time with friends like this. What a Life we live.