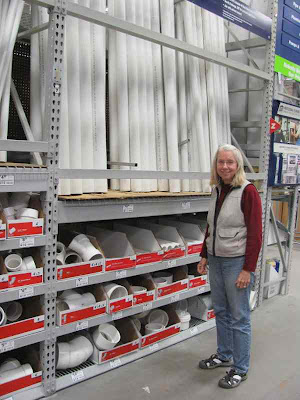 When we were at the Summerdale SKP park they did not allow any clothes lines, not that we normally put one up. Because of the ban, many of the RV's had a drying rack attached to their ladder. While one or two were store bought, most were homemade from pvc pipe. A few days ago Linda decided she wanted a clothes drying rack, and that I should make one for her. She wanted a heavy duty one so she could hang jeans on it and today we headed off to Lowe's to get what we needed to make it with our first stop being to look at the pvc pipe. 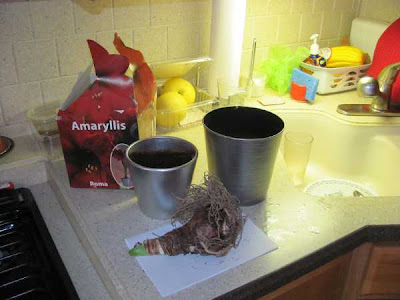 Nothing is ever as it seems and we will shortly return to the drying rack, but while we were at Lowe's Linda quipped that she was still looking for an amaryllis for Christmas. So here are the pots for the amaryllis and the narcissus we ended up buying. As we have run into in past years, many of the amaryllis bulbs had already started growing to the point the yellow leaves were twisted in the package. Not to be deterred, Linda got busy opening the boxes and eventually found one in the color she wanted that had just started to sprout. Of course we will now be hoping that it decides to really get growing and present us with a beautiful red flower about Christmas Day. It may not, but if we don't try then it sure would never happen. Isn't amazing that if you don't think you can do it, and so never try, you always turn out to be right. 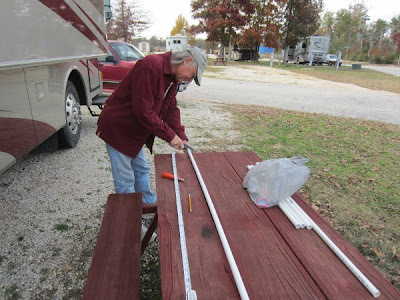 Back to the drying rack, as you can see I managed to talk Linda out of making it as heavy duty as the pipe she first picked out. OK, maybe it wasn't really that way but I did think she spent a little too long looking at the heavy duty pipe. Wonder what new something or other she has in mind? We left Lowe's with two 10 foot sections of half inch pvc pipe, four elbows, two tee's, two eye hooks and two things I wasn't sure what they were called, but I had an idea of how to use them. I asked Linda, "Did you take a photo of everything?" to which she said "Yes."

Now I see that most everything was still in the bag when she took the photo, but I have to admit her answer to my question was certainly correct. Next time I'll ask if she took a photo where we could "see" everything. Of course one could say you could see everything in the above photo, if you looked in the bag that is. That woman is far too smart for me. 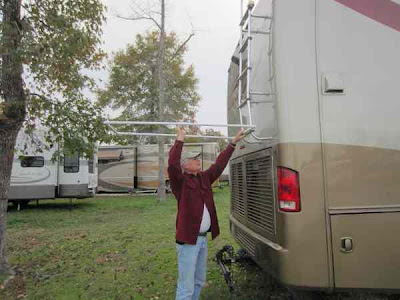 We had both spent time on the Internet looking at the many different racks people had built or bought, and read any discussion about their design. In the end we decided that ours would have to be custom built, designed to be stable, provide enough drying space, be easily put up and taken down, all the while fitting in the bay without having to be disassembled, and in the end we achieved just that. The photo shows an early test of the basic frame to see how it wold fit on the ladder. Then we went around to the side of the coach and tried to fit through the door and into the bay. We had sized it so we could do this and it was gratifying when it went in just as planned. 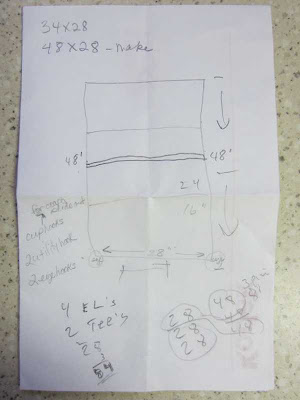 This is only to prove that there really was a plan, even though we ended up with slight modifications as we bought and built. 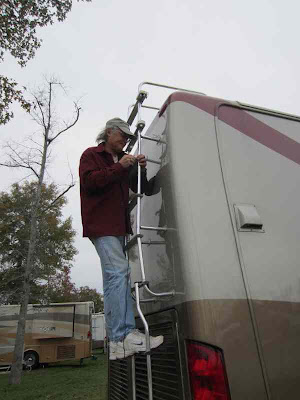 One of the questions we faced was how to fasten the rack to the ladder. We decided to tie cords high up on the ladder, then use a small ball bungie at the outer corners of the rack. By tying a loop in the cord this could easily be slipped on and off the bungie ball. I hope to put up a page that better describes all that we, especially since the way we came up for fastening the base of the rack against the ladder with those metal hooks was something we had not seen anyone use. I will try to have the special page done by midweek, and she who overseeth he who writeth will no doubt make sure it happens. 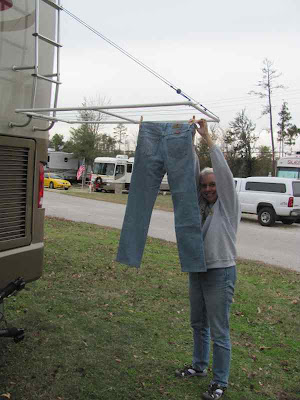 The final test, and Linda pronounced it perfect. It looks like it is fairly high off the ground, and it is, but Linda wanted it that way. Beside with the sections of bungie cord, she could just reach up and pull it down lower if we were ever in site that had a pronounced slope to the rear. Tomorrow will be the real test when she washes our sheets and hangs them out on it. Though something tells me she is going to pronounce it perfect. Which means, Very Very Good Bob. 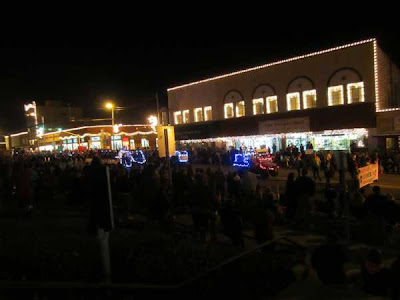 We ended the day by going into town and watching, along with hundred's of other people, the annual Livingston Christmas Parade. We sat on the Courthouse steps, and watched as the floats, horses and happy kids passed by. It was great and it is what makes small town America so special. All day's are great, but some day's are really great, like today.