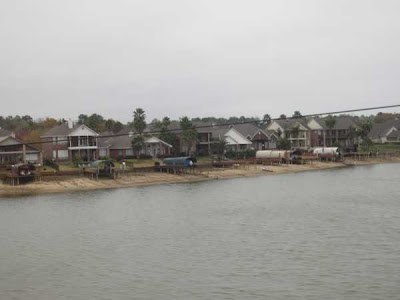 Travel day today, but before we actually got on the road, or at least heading west, we had to get our coach inspected. We have to laugh at the people that pick South Dakota as their residence because Texas requires you to take a driving test if you have a motorhome over 26,000 lbs, or because of the annual vehicle inspections. If you're looking for an excuse they are both pretty good. But they should never be the reason you pick another state than Texas as your domicile. Unless things that go bump in the the night scare you, that is.

We hadn't been on the road long, or at least it didn't seem like it had been very long before we were crossing several appendages of Lake Conroe. All summer long during our travels people were asking us about the terrible drought that Texas was under going, and we would always say we were so glad to be where ever we were than back in Texas. Today we go to witness first hand some of the devastation the drought conditions brought to the area we call home. What a summer it must have been to have summer home on the lake and not to have been able to use your boat or jet ski's. I can only hope my cousin Patty and her husband Wayne weren't left high and dry at their Lake Conroe summer home like these homes were. 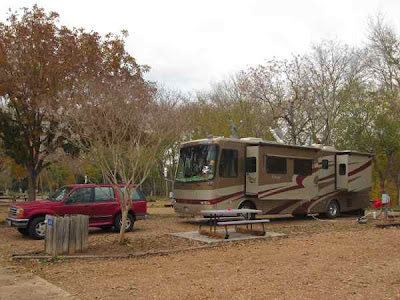 Our destination for the day was to the west of San Antonio in the Hill Country. Never been to the Hill Country? You've missed out on one of the best places on earth. And that is not just because we are transplanted Texans. Really interesting small towns. Winery's, gift shops, bed and breakfast's, historical sites, gently flowing rivers, God's Country. Call it what you will, but is worth a stop in our passage through Life. We were all alone tonight, but we had our Christmas decorations out in full force, so what more could we ask for. 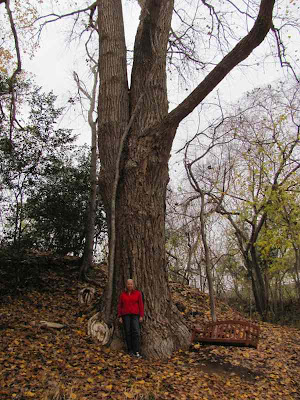 Down along the banks of the Colorado River, the Texas Colorado River, we found a awesome Cottonwood tree. Note the swing, and if you visit Linda's Because We Can II website you can see a video she took of her totally incompetent husband try to swing a swing that didn't want to swing. Life is what you make it, and we had fun making it fun today. Closing out the day was Linda using her latest purchase to iron a patch onto the pocket of my blue jeans. Only some $20 from Ebay, this iron heats in only 15 seconds, has three settings, delicate, synthetic and cotton, and can also be used as a steam iron. I have to say that I married far better than merely well, I married the smartest and prettiest girl in Athens County, Ohio in the late 1960's. And that is not bragging. That is simply stating the truth.

I will close with a personal comment. Today my Dad would have been 92 years old. He died far too early, over 30 years ago, before he ever got to retire. Hardly a day goes by that I don't think of him, as he was a person who understood what Unconditional Love was. I have never been able to live up to his standards, but to whatever standards I have lived, I am a better person than I would have had been, had he not been been my father. I love you Dad.