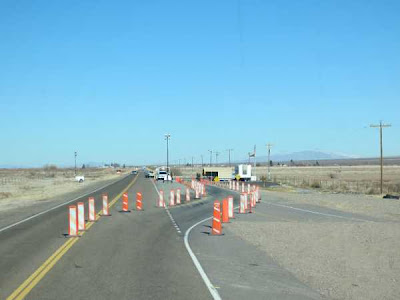 The box of Christmas presents was at the post office this morning, and as quick as we could, we packed up and headed to warmer weather. Our destination being Canyon Vistas in Gold Canyon, AZ, a park we have stayed at several times in the past, and where the weather is warmer. As always, the Border Patrol checkpoint on Hwy 11 a few miles north of town was our first stop, and with no traffic, the agents asked a number of questions about the fulltime lifestyle. As I've said before, I don't envy their job, standing along a lonely stretch of highway on a cold, windy day, but they have an important job to do. 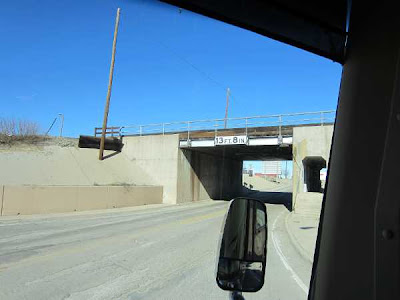 Linda always gets nervous when she sees signs like this. I think it has something to with that incident in Mississippi this spring with the MotoSat. And of course our route was taking us under that bridge. Looking over at her, I could see Linda was very tightly holding her seat securely in place, something only someone as brainy as she is would think to do at times like this, as most anyone else would be going on about whether we would fit under the bridge or not. Awesome Linda. 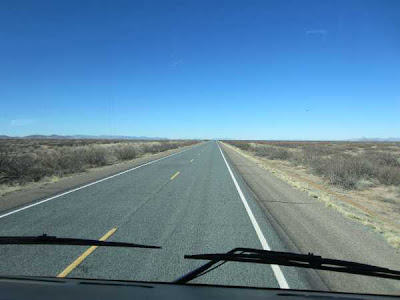 Having cleared the bridge by at least a foot, we took to the open country for the remainder of the drive to the Phoenix area. We could have traveled the Interstate most of the way, but since we prefer the other type of roads, we only took I-10 from Deming to Lordsburg where we exited to US 70 on the east side of town. There was a Flying J at the bottom of the ramp and we filled at the convenient RV pumps instead of the trucks pumps. Every time we do this it takes far longer, the pumps not having the big nozzles, and the credit limit set too low so that we have to reinsert the credit card. If we need to go inside to give them the card it makes a lot more sense to use the truck pumps, plus there is never a canopy over the RV pumps like there is over the truck pumps. Some people never learn, and I seem to be one of them. 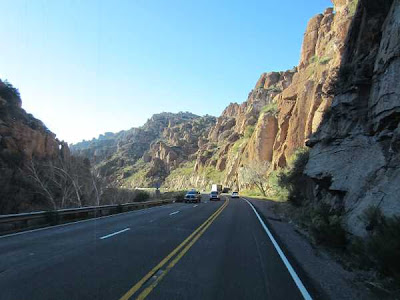 US 70 is a good road, with the worst stretch being the first few miles west of Lordsburg, then it is open country, a town or two, and very little traffic. At Globe we turned onto US 60 for the last portion of the drive, and also a beautiful descent down a canyon. Then the haze of the Phoenix area appeared in front of us, and it wasn't long before were pulling into a park we have stayed at several times in the past. Warm weather, at last warm weather was where we were at. 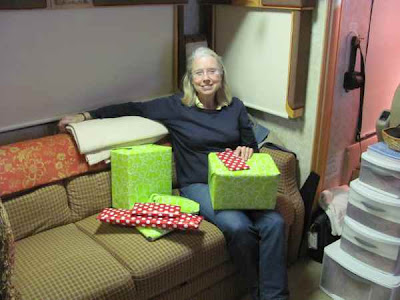 Once we were settled, the Norcold working just as it should, dinner over with the dishes washed, dried and put away, Linda announced it was time, an announcement that certainly got my attention. Next thing I know she's out the door of the coach, but only for a few seconds, returning with that box she had worked so hard to get at the Columbus post office. Soon the presents were spread out beside her on the couch, and she was saying, "Who's first." Knowing how much fun she has opening presents, I said, "You, then you, then you." 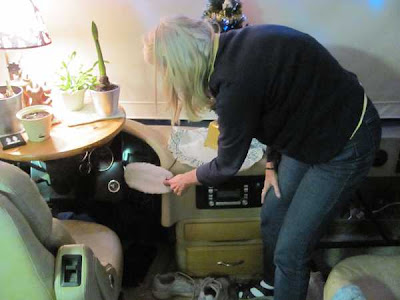 Didn't take her long to begin using one of those presents, an OXO microfiber double duster. In fact I wasn't sure that she was going to stop, as all I heard was "Wow, look at this", and other observations as to how efficient it was at picking up dust. Dust is the nemesis of our existence, especially since we have the windows open whenever we can. Long ago she gave up the battle of the dust, but now I can see she has a new, more powerful weapon to battle that evil. Thanks Jenny!!! 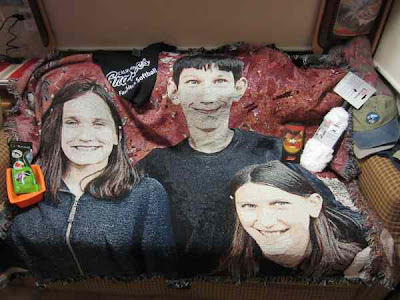 The gifts displayed, but the best gift of all was the new throw that will have Justin, Lindsey and Abby sitting on our couch with us.

Life, meant to be lived.
To experience the connection of family.
The joy of living.
The wonder of love.
The adventure we call Life goes on and on.