The good, the bad, and the great 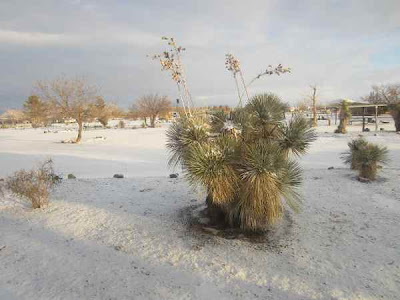 It was a good morning today, as we were greeted with snow and sunshine this morning. While it looked similar to yesterday, fortunately it was not causing any of the problems with travel that yesterdays storm had brought. Also the temperatures had only dipped into the upper 20's, and the sun quickly melted much of the snow. 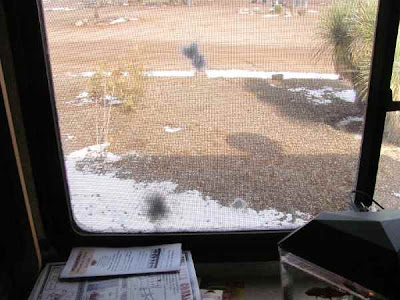 About 10:30 Linda headed off to the post office, a three minute drive, to see if the box of presents had arrived. Or at least I thought she had left, but as I sat at my computer I caught a glimpse of a wildly waving arm. Looking up, I saw a snowball heading directly for me and I instinctively ducked. It splatted against the window in direct line with where my face had been a split second ago. Then I watched in wonder as she reached down, scooped up some more snow and fired another one right at where my head was now located. As she raised both arms over head in triumph and walked towards the car I realized that all that softball talent our granddaughters have sure hadn't come from me.

Time now for the bad. The package was not at the post office. The postmaster told her there was a truck with mail on it coming down from Deming, and that it should arrive just before he closed at noon. He suggested Linda call at 11:55 and he would let her know if it had arrived, then wait for her if it had. Unfortunately, when she called, the truck had not arrived, but the postmaster told her it would be in around 12:30 and if her package was on it, he would call so she could come get it. Hanging up, she turned to me and said, "That's why we get our mail at small post offices. They are the best." All I could do was smile as I thought back to prior discussions on this subject when she was always wanting the mail sent to large town post offices to make sure it was there when we arrived, only to be disappointed time and again. And each of those times I had lobbied for small town post offices. What's that saying about old grizzly's and new tricks?

Just after one o'clock Linda's phone rang, and it was the postmaster. He was calling to let her know the box had not come in, but there would be another delivery for Tuesday morning, as they would be closed on Monday for the Christmas holiday. Or if we wanted to move on, he could forward the box to where we would going. Not every post office is as bad as the one in Alamagordo. 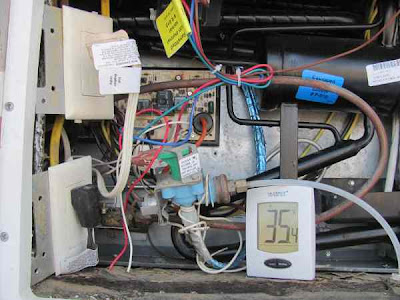 All the while the Norcold was continuing to be a Notcold, but therein was the clue to a possible solution. I was sure it was a temperature related problem, because the only times it had quit running were when the temperatures had dropped below freezing overnight, whether at Manassass, Fort Payne, or here. If that was the problem then when the temperature climbed back above freezing today it should come back on like it did in Manassass and Fort Payne. It had simply been too cold yesterday for it come back on, never getting above freezing, but today the temperatures were predicted to be in the low 30's. 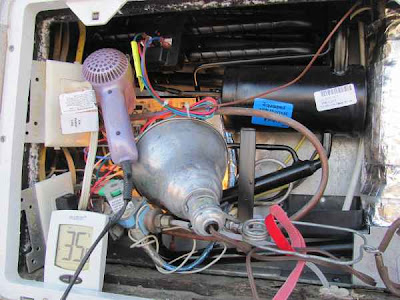 There seemed to be two problems here, both related. The control board was cutting out whenever the temperature fell to a certain point, and lately, maybe because the temperature was so low for so long, the 5 amp fuse was blowing, meaning it wouldn't start back up when the temperature rose during the day. The solution to the fuse was to replace it, the solution to the temperature problem was to generate some heat. Note the work light and hair drier. The hair drier on low puts out a gentle stream of warm air, the trouble light also generates heat. Then by placing a piece of clear plastic over the top 3/4 of the opening it would help hold the heat in, but allow the necessary ventilation for the refrigerator to work properly. That is, if it should start working. 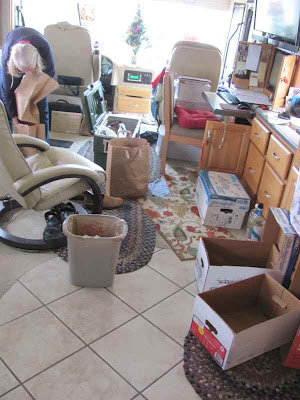 It hadn't started working, and finally it came time to move the contents of the refrigerator down to the "refrigerator bay", the temperature in there being 34 degrees. After digging all these boxes out, and Linda trying to empty them, it was time to open the frig and empty it out. Imagine our surprise when Linda not so calmly yelled out, "The green light, the green light, the refrigerator is working." Now we knew, the problem really was related to the outside temperature, and it confirmed what we have always known. The coach, really, really, really does not like cold weather.

So now we know we can stay here until Tuesday, even with a nighttime notcold Norcold. Actually it is amazing how well the refrigerator holds the cold if you don't open it. Eighteen hours of no cooling and everything in both freezers was still frozen solid. We could leave for the Phoenix area, warm weather and a frig that works 24 hours a day, but why? We like this park, we don't like the hustle and bustle of the Phoenix area. Sure the weather is warmer up there, but we couldn't possibly get anyone to fix the problem until Tuesday at the earliest anyway. We figure the extended warranty will cover the cost of the repair, so even though we could order a new board ourselves, it really wouldn't be worth it.

Looking at everything that has happened over the past few days we can only conclude that it is Christmas Eve and Life is Great. What more could we ask for.