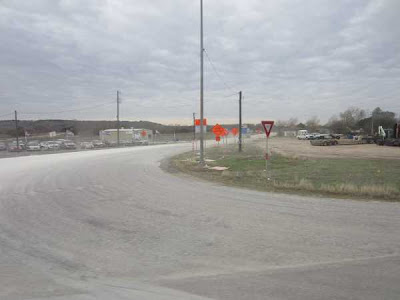 Time to move on, though not that far, and not with the start we had planned. It turned out that the route we had planned on taking to I-10 was going to be down a road that was being reconstructed. After seeing all the dust and debris at the entrance, we decided to turn around and go another way. Maybe it would have been no problem on that road, or maybe we would have been kicking ourselves for taking it. Regardless of how we felt about it, the GPS was really upset with us for not following its planned route, meaning it spent the next 20 minutes or so yelling at us. As Linda said, "Let's see how long it takes before it gives up and accepts the way we are going." Life is what you make it. 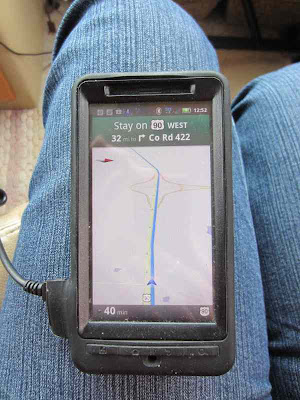 You mess with Linda, you better be prepared to pay the price, which was something our GPS hadn't understood when it kept trying to tell Linda its route was better than hers through San Antonio. We wanted to take Texas 90 straight through the town, while the GPS wanted to route us on various inner and outer belts. Wasn't going to happen, and so we navigated by road signs with no problem.

Once through San Antonio, Linda got out the Droid and started doing things on it. I was curious as to what she as up to, but let her do her thing. Then with more than a hint of triumph in her voice, she says "There's where we are." while waving the Droid at me. I was to learn she figured out the Droid navigation app and was now using it check our GPS. I just hope they never come out with a husband app, or my days may prove to be numbered. 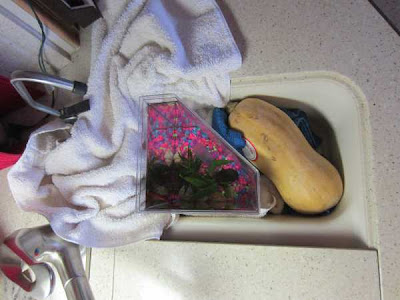 Sure Linda can be hard as nails, but she can also be soft as cookie dough. When she had packed away Red Rod prior to the days travel, I could hear her talking to him, but really hadn't paid any attention as I was busy with doing things myself. After we arrived at Hondo I was again privileged to catch her talking to Red. Still, it gave me pause when I heard her talking about him being squashed in the sink so she had put a squash next to him to keep him company. When all the mystery's of Life are finally unraveled, man will still not understand woman. 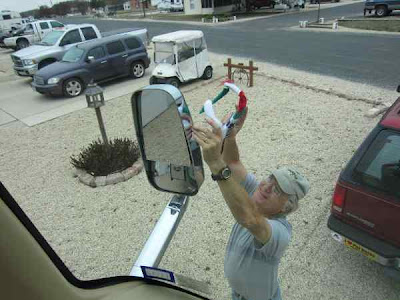 Remembering that former life, the one where the house stayed in one place, it was always fun decorating for Christmas. In this Life, when we are traveling during the Holiday Season, it is also fun, it's just that we get to do the decorating more times. I have to laugh at Linda as she picks up a wooden snowman figure, looks at it, looks around the inside of the coach, and asks herself where she should put it this time. The most amazing part is that every time we move she picks them all up and puts them on the bed until we arrive at our next destination. In that previous life we would be finding Christmas decorations until June. Could it be the old grizzly is learning new tricks? I only put the two figures on the mirrors up, and to date haven't forgotten to take them down. Maybe Linda thinks simple people should have simple tasks? 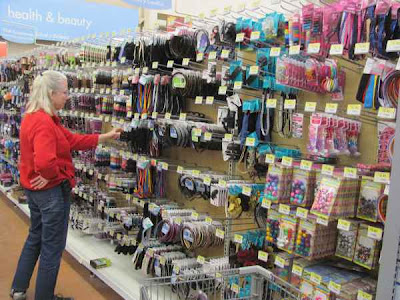 I've been complimenting Linda on how pretty her long blond locks are, and it is really paying off, at least for the companies that make all the hair dodads, that is. We were back to WalMart this afternoon to stock up on food before we head off to the more barren area of Texas, and where did she head first? Actually we got off pretty easy, and I will admit I bought more things for Red Rob than she bought for her hair. 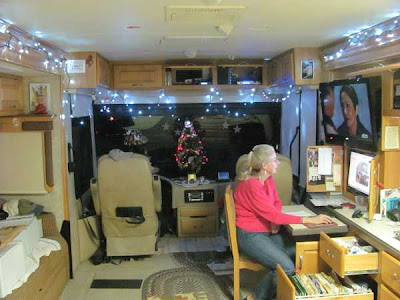 A Christmas movie on TV, Christmas decorations and lights brightening our home, and a beautiful woman that is the love of my Life. What more could a guy ask for. Life is indeed good.