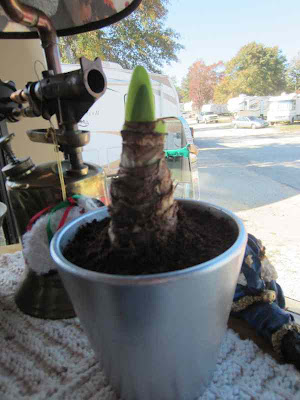 The purpose of this photo and the one that follows is to establish the baseline for just how fast Linda's new plants will be be growing. This is the amaryllis, planted to the proper depth and now residing on the front table. We usually don't open the shade beside the drivers seat, but wanting to make sure her babies get all the light they need, that shade is now opened in the morning and closed in the evening. 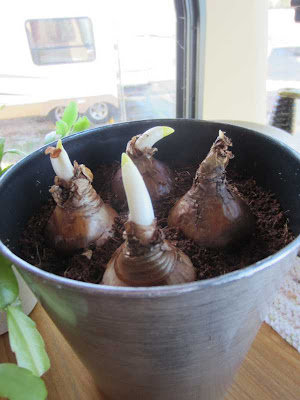 The narcissus show the effects of sprouting inside the box they were in. Hopefully a little sunlight will go a long way. If that isn't enough, the different times Linda stops beside them and and gazes down should give them something to shoot for. I was going to mention something to her about fertilizer, but it occurred to me that fish emulsion is an excellent plant fertilizer and I don't want her to any ideas as to what use she put Red Rob. I can just she her writing about how Betta's make better bulbs. Not going to happen, he's my fish and I like him just the way he is 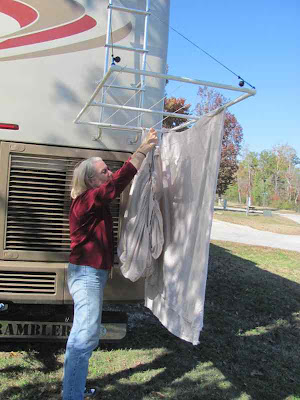 Linda was putting her new drying rack to good use, as today it was time for the sheets to take their turn. I know where my nose is going to be tonight, buried in my pillow. 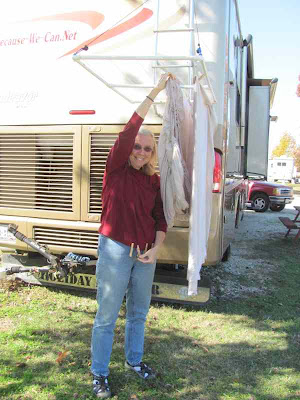 Linda was wondering what she was going to use for a clothes pin bag, then I noticed she had come up with a rather inventive solution to the problem. Smart girl. Smart man for marrying such a smart girl. 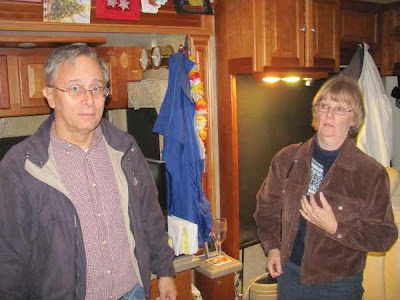 In the evening we got together with three other couples to go out to eat. We had met Joe and Jan when we were in Livingston last year. George and Kelli who we had met at Betty's RV Park were also there. The third couple, Tom and Ann, we had never met. It happened later, while we were having an after dinner drink in Joe and Jan's coach, it, being what led to the above rather interesting photo.

As we getting ready to go our separate ways, everyone started passing their cards back and forth. Looking at ours, Tom remarked, "You have a blog." to which someone else said, "Yes, and it's rather interesting." Mulling that over for a second, Tom asked, "What's in it?" That was when I dug out my camera and as I took this photo, said, "You." You can probably figure out from looking at Tom, exactly what he thought of that.

As always, Life is not a dress rehearsal. Don't be afraid to laugh, love and retire early.