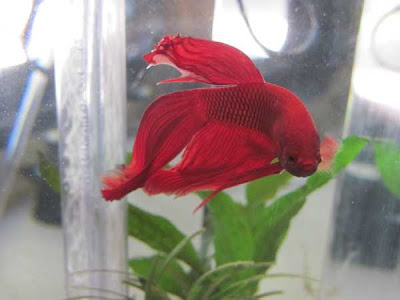 With this being the first of December, December being the month of the Christmas season, plus red being the seemingly predominate color of Christmas, what better way to start the month out than with a photo of Red Rob. He really does like his new bigger tank, swimming around much more, and being the nice guy he is, not bothering his three new tank mates. [Editor's comment: This proves he is a finicky eater.] 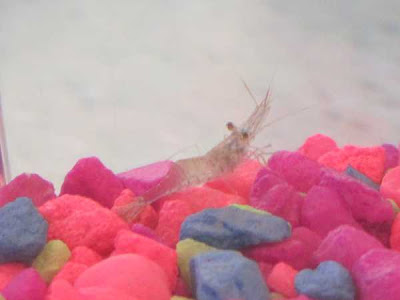 I've been reluctant to post a photo of those "tank mates" mostly because I find it nearly impossible to take a decent photo of them. They certainly live up to their name, ghost shrimp, and for now, the above is the best I can do. They are certainly funny little creatures, having a clear body and two little black eyes. Since they have dark innards when they eat, and we've noticed them having dark innards on occasion, we know they sure aren't starving to death. 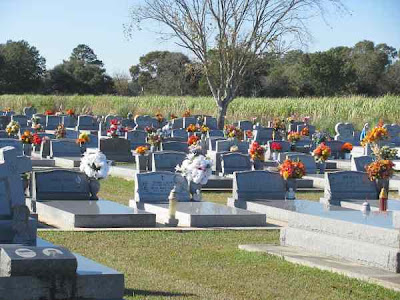 When we got ready to go do some siteseeing today, I asked Linda where she wanted to go first, and you can see what she picked. Everybody has something that gets them excited, and for Linda, it was the chance to see graves on top of the ground. She was hoping to see the little boxes she knew they used, but unfortunately this seemed to be a newer cemetery and the burial practices here weren't what she was looking for. She did however get to see sugar cane growing in the field behind the cemetery, and also all the artificial flowers on the graves which gave the cemetery a special sense of serenity. 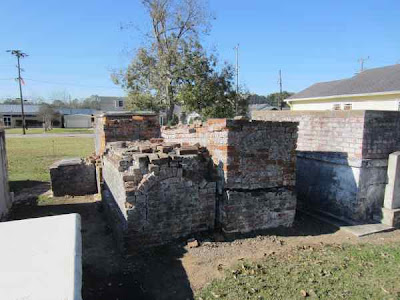 Proving just how intelligent my beautiful wife truly is, she had a cemetery backup plan, and that was our next stop. Located downtown beside the Catholic Church is a really old cemetery with the older style burial vaults. True to the French heritage of the area, many of the early inscriptions were in French. Unfortunately I was too busy looking at the markers to notice if Linda tried to peek into any of the vaults, but my best guess would be that she did. Hey, if that was what she tried to do as a little girl in the cemetery near the church where she grew up, why wouldn't she try to do it today. After all, she's still a little girl at heart, at least sometimes I think she is. 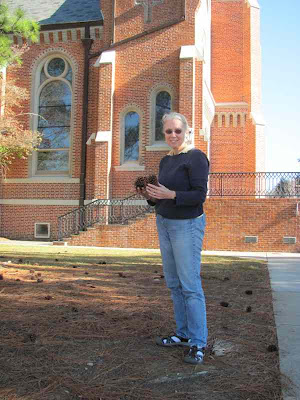 Later I enjoyed looking at the church while Linda took photos of the flowers around it. Trying to get a nice photo of the side of the church, I noticed Linda with her two big cones, which she was proud to display. Later, after putting the two pine cones she had picked up on the church grounds in the Explorer, she plans to use them as part of the decorations in the coach, we walked around exploring the downtown area. 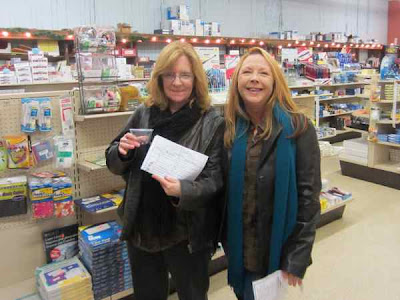 In the evening, after the Happy Hour, most of the group went into town to participate in the annual Abbeville Christmas Stroll. It's one of those small town America things where you go around to different businesses, getting your sheet stamped, and enjoying great refreshments and your fellow stollers. What really made it fun was the fact that our little group of eight RVers didn't know the town, plus it was after dark, but in the end we succeeded in collecting all of the stamps. 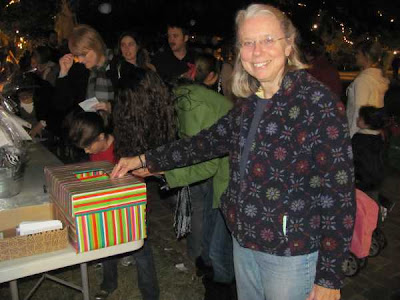 The drawing was to be held at 8:15, and we had our completed sheets deposited in the drawing box at 7:30, which wasn't bad at all for a bunch of visitors to the town. We didn't get a call, but that didn't mean we didn't win. This is one of the reasons why we fulltime, the joy of discovery, the fun and fellowship, the chance to really Live Life. As always, remember, Life is not a dress rehearsal. Don't be afraid to laugh, love and retire early.

Email ThisBlogThis!Share to TwitterShare to FacebookShare to Pinterest
Labels: Louisiana