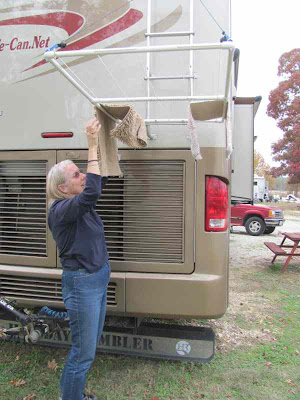 Another day, another load of wash. Maybe I have unloosed a monster. No maybe about it, this is happening everyday now. I get up, I fix breakfast. The grizzly stirs in the back. The coach begins to rock as the washer begins to do its thing. She comes out. I ask, "Is the washer running?" She says "Yes." And so begins another day just as the day before and the day before that. Verily I say unto thee, "A monster has been loosed upon the coach. A monster of the washer and drying rack kind." 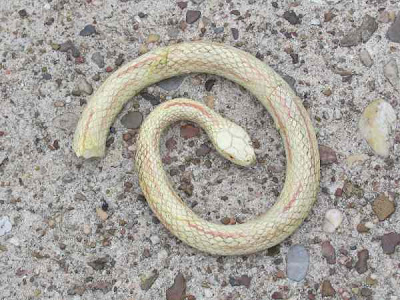 Don't think we didn't do anything today, because we certainly did. Linda had an early morning appointment for several more well woman checks, while I went off to get the Explorer inspected. That presented a small problem when they asked me for a copy of our current insurance card and a call to Linda resulted in the fact that said card was on the dash of the coach. I said nothing to her, and retrieved it from the coach, eventually getting our inspection sticker. Good Bob. As far as the partial rubber snake, it was laying in a parking lot. Everybody is always posting photos of their friends or what they had at the restaurant, I though I'd post a photo of what we found laying in the optician's parking lot. 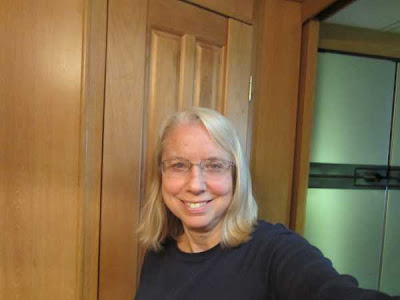 The reason for the stop at the optician's was to pick up our new glasses, and I know over the next few days to weeks, Linda is going to be hurting for certain. Whenever she gets new glasses, she and the glasses take a period of time to adjust to each other. Along that line. I asked her if she wanted me to take a photo of her new glasses, only to be informed that she had already taken one. 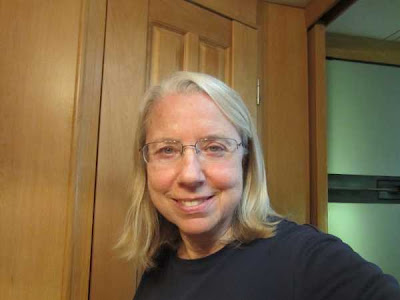 Then I was to learn that "a" photo wasn't the word for it. She had taken enough photos to fill a hard drive and then some. I wasn't sure what it was she was looking for, but whatever it was, in one of those millions of photos she had to achieved it. 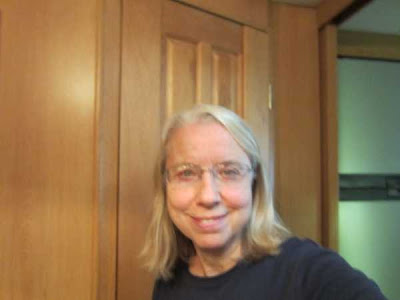 I expend many words in these Daily Journals expounding on the many attributes of Linda, but as much as I would like her be perfect, and she almost is, every once in awhile she proves herself to be a mere mortal. I couldn't believe it when I saw this self portrait that was, shall we say, slightly out of focus. It has taken a great deal of effort on my part to admit that I was a failure when it came to picking a Life mate. All this time I was under the impression I had picked the perfect woman to be my wife, and here, after all these years I find that I was an abject failure in that department. It is simply too late to start the search over so I'll just have to live with what I've got. I guess when Life gives us lemons, we should make lemonade. Poor Bob.

Actually, I have to be the luckiest man alive to have found, on a blind date of all things, a woman that has made me a better person that I ever had a right to be. Lucky Bob.